It's hard enough to leave your country to work as a maid in a foreign land.

It is probably even worse if you work in a country where the entitlement to just one rest day a week is subject to a vigorous debate.

Singaporean social activist Jolovan Wham highlighted this in a Facebook post on Thursday where he recounted a case of a foreign domestic worker who was unable to find an employer, simply because she wanted two days off a month (yes, a month, not a week) instead of one:

In case you can't read the post above, we reproduced it below:

Volunteers and I have been trying to help a domestic worker find a new employer after things didn't work out with the previous one. After 3 rounds of interviews, the agent calls me in exasperation.

Agent: This is too much. She is too fussy. I spent all that taxi fare on her, bring her for interviews at employer's house but she is not interested.

Me: What do you mean?

Agent: She wants 2 days off a month. Is she here to work or to enjoy a holiday? Employer can at most give 1 day off, not 2. Because of this she doesn't want the job?

Me: Do you think you could convince the employer to at least let her have 2 days off a month?

Agent: No, at the moment I can't find anyone. If you want to work in Singapore you must accept this. How many employers will give you so many off days? She must be prepared to work hard, not treat coming here as holiday. I have already spent all this money on her, including the MOM application fee of $30. She has to pay me back.

Volunteer: Why don't you want this employer?

Worker: I don't think I could work with only 1 day off. I would probably be unhappy and want to leave. There's no point for me. I'd rather go home.

As shocking as this may seem, this isn't uncommon, judging from the personal accounts some foreign domestic helpers shared in comments to the post: 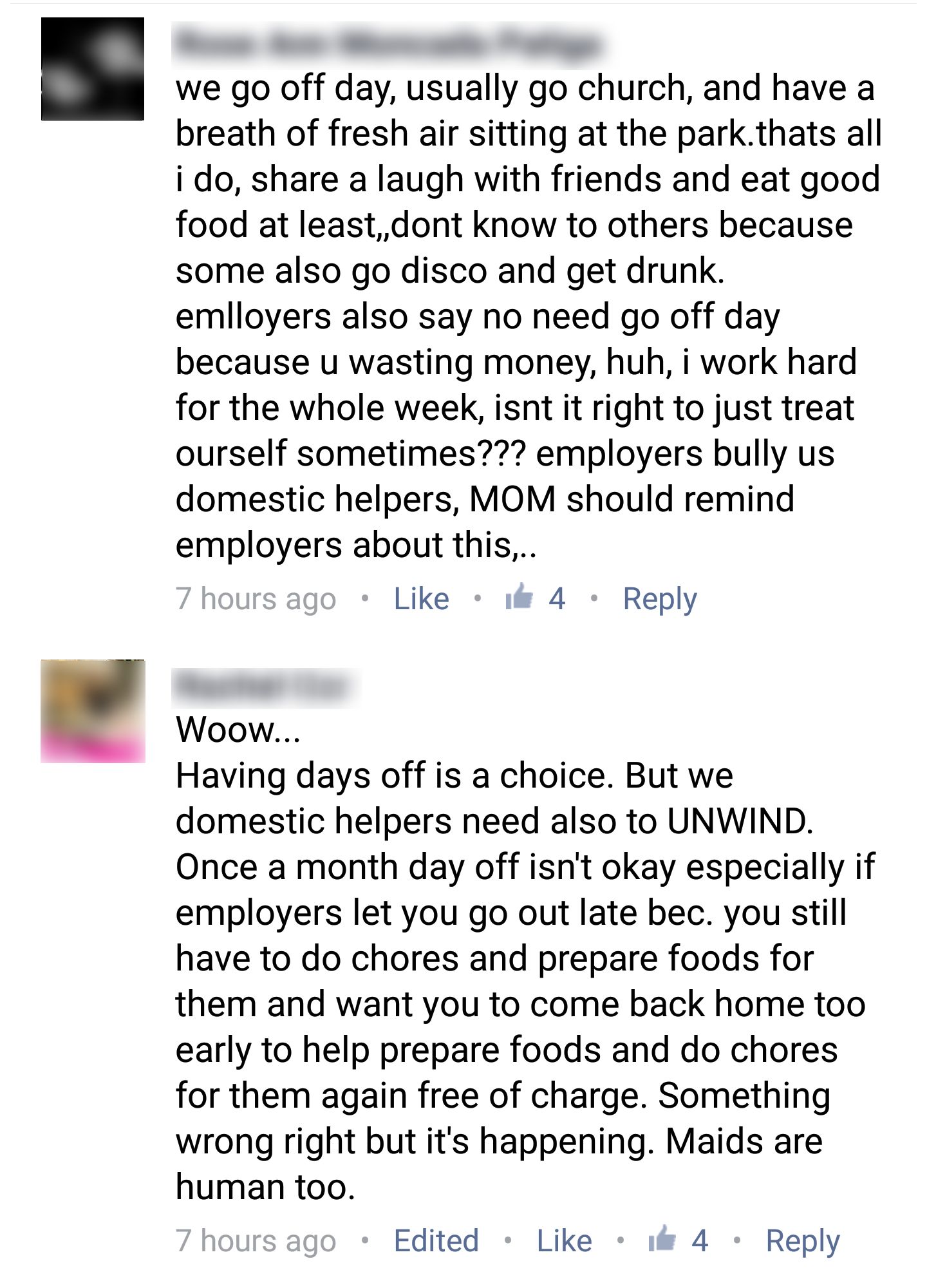 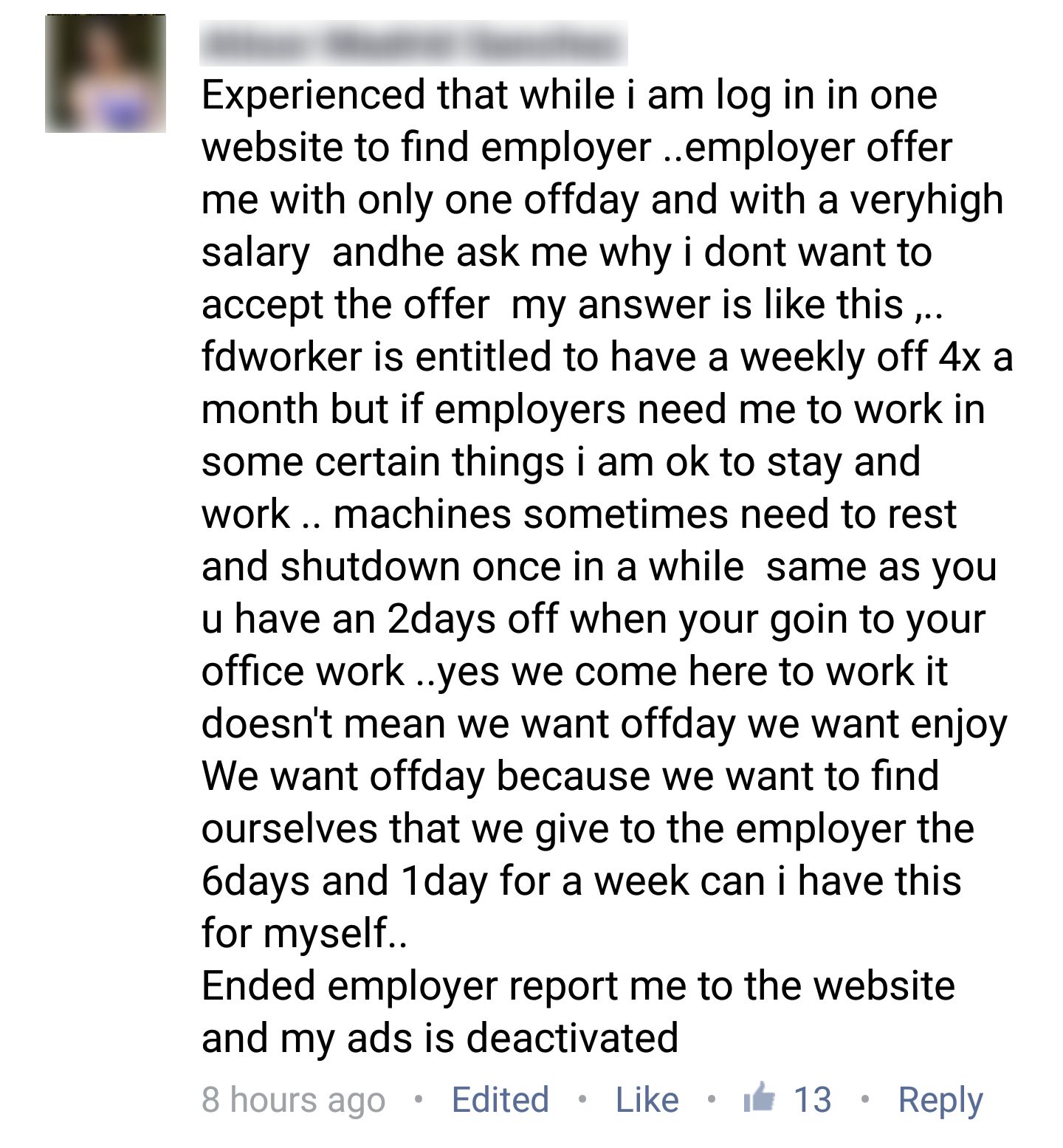 Now first of all, we should point out that requesting two rest days is completely within the foreign domestic helper's rights by law. She is not being fussy; she is not looking for a "holiday".

In Singapore, employers of foreign domestic helpers are required by legislation to give their helpers a weekly rest day, or a day's wage as compensation. This has to be mutually agreed between employer and employee, and must be documented in writing.

Employers who breach this requirement can be penalised with a fine of up to S$10,000 or a jail term of up to one year or both.

Secondly, even without the backing of the law, giving your domestic helper only one rest day per month is borderline cruelty. As highlighted by many of the responses, domestic helpers are not machines. They need rest days to unwind and recharge for the next week of work, just like the rest of us with two rest days each week.

Perhaps some employers genuinely need their domestic helpers to work daily, for example, to look after family members who require constant attention and care.

A simple work-around solution is to employ respite care services when your primary caregiver or domestic helper is not around. More information can be found in this Ministry of Manpower (MOM) handbook for employers

It's not difficult to treat foreign domestic helpers humanely. Just follow the golden rule: Don't subject others to things you won't do to yourself.

You wouldn't want to work as a slave — don't expect domestic helpers to be one.

Since you're here how about another article:

They say we can buy anything online, so here’s a life-sized gummy snake

Watch out, paper qualifications. Real life experience is coming for you.