This time, the 26-year-old mother of two made a TikTok of her telling her son that she is going on holiday without him to elicit a reaction out of him.

The video lasted 2 minutes and 44 seconds.

@naomineo Why would I think he wanted me to give up my seat for him?! 😭 #prank #fyp ♬ Monkeys Spinning Monkeys - Kevin MacLeod & Kevin The Monkey

It showed Neo telling Kyzo that he will promise not to be sad, before saying she forgot to buy his ticket, explaining why he cannot take him along, and insisting he has to stay home.

The video culminated in the boy crying out loud and burying himself in the suitcase.

In response, a woman in Singapore posted a 19-second video to take a swipe at the antics of a parent bent on saying outrageous things and blatantly recording the proceedings, and to show what it is like from a child's perspective to undergo such an experience.

The caption of the video read: "how does your child not see that phone in front of their face".

For effect, the woman said:

All the while, she was aiming her mobile phone at the mirror while recording, to show what the adult pulling the prank apparently looks like behind the camera.

The parody video has been watched more than 191,000 times in three days.

A majority of the reactions to the parody TikTok video laughed along with the woman and applauded her for shedding light on how ludicrous the set-up is behind the scenes and as seen by the child, who is likely too young to recognise the prank and call it out.

However, there were naysayers who accused the parody video of just disagreeing for the sake of disagreeing. 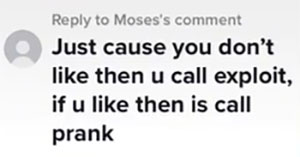 In response, the woman posted a 2-minute 15-second video response to explain her stance on why getting children to react, recording them, and turning them into social media content is exploitative and frowned upon.

The woman said: "I wish it was this simple, but unfortunately, it's not."

"In my personal opinion, I feel like posting a child once or twice as a prank is fine, but if that's the primary content to exploit their reactions for views, that's exploitation."

"Unfortunately, a lot of children don't understand the consequences of social media, the repercussions of being on social media a lot, like your face plastered everywhere."

"That's why most social media have like age limits so as to prevent them from seeing other content, and it is also to prevent putting themselves on social media."

She continued: "I'm not going to say anything about the trust (issues) because that's obviously between parent and their children. But as a bystander, and I'm watching this content, all I have to say is, 'Do you not have any personality traits?"

"If your entire account is based on pranking and exploiting your children, making them cry, maybe you should rethink your career. And hopefully, don't have any more children."

The TikTok user also added in the video that she's "not a child doctor" and doesn't specialise in "children and their thoughts," but still "strongly [believes]" that children should be allowed to protect their privacy and have a say if they want to appear on social media or not.