At least a hundred people turned up at Smith Street in Chinatown to watch a pair of buskers, a singer and guitarist duo, perform on Saturday evening, Sep. 10.

The buskers caught the public's attention earlier that week after a TikTok video showing them credibly pulling off a Cantonese song by Beyond the previous Saturday was widely circulated online.

Young and old showed up

The larger crowd that turned up this past Saturday included adults, children, and tourists, and it appeared many of them showed up just to catch the buskers perform live.

Some of those watching appeared impressed by the turnout and the level of audience participation.

A TikTok video of their latest busking session showed them performing the 1985 Cantonese hit "朋友" ("Friend of Mine") by legendary Hong Kong artiste Alan Tam.

The buskers performed vocals and guitar over a karaoke backing track.

The singer was seen engaging the crowd and encouraging them to sing along and wave their hands.

At one point, he even walked over to the audience to sing and stand with them. 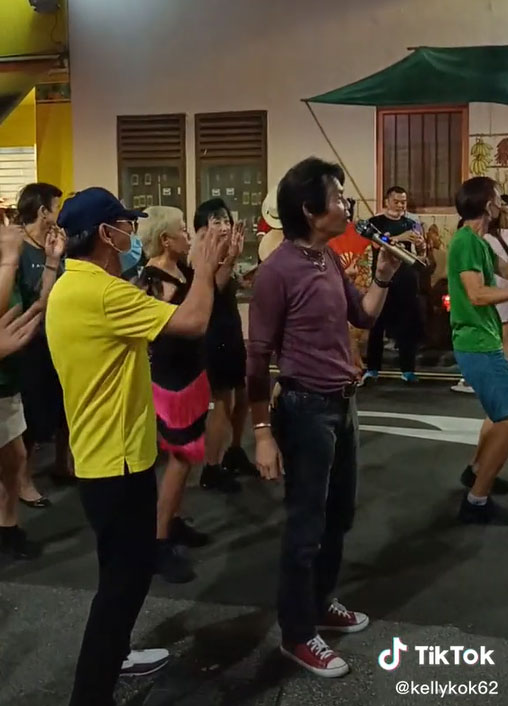 Some of those present were also line dancing.

The song ended with the appreciative audience clapping and cheering.

A separate video showed a group break out in a spontaneous song and dance after the buskers were done.

The duo have been regularly busking every Saturday from 5pm onwards at Kreta Ayer Square behind the Buddha Tooth Relic Temple or at Smith Street.

The singer is Steven Ho, while the guitarist is Peter Han of Tokyo Square, a Singaporean band that performed a popular rendition of "Within You'll Remain" in 1985.

Ho has been busking since mid-2018 after getting his busking licence.

His music in Chinatown is known for getting audiences on their feet.