For an HDB owner, which is worse: One cat or two dogs?

Trick question. Neither are allowed.

Under HDB rules, housing multiple dogs in one HDB flat is considered just as bad as having a cat. Those who break the rules are liable to be fined up to S$4,000.

But owners have been keeping multiple dogs and cats for years.

Now authorities in Singapore are finally considering the prospect of allowing HDB owners to do what many have already been doing — keep cats.

All along, HDB "closed one eye" to cats in flats. So what if the rules change?

There has not been consistent enforcement of the cat ban. Many HDB cat owners keep their cats openly without fear of being discovered.

As long as their neighbours don't complain, HDB cats and their owners are generally left to their own devices.

In fact, the current public consultation (which includes a public survey) contemplates that there may be some who are not aware of the rule against cats in HDBs:

The current situation could be described as HDB "closing one eye" to cats in flats.

But HDB has not closed both eyes, as it has acted on complaints and taken action against flat owners in some instances.

And, for example, if a flat owner allows their cat to roam freely, causing trouble to neighbours while pooping and peeing in common areas, HDB would have legal grounds to take action and can fine the owner up to S$4,000.

Is it true that "responsible cat owners have nothing to worry about"?

With this "close one eye" situation of enforcement, one might think that "responsible cat owners have nothing to worry about" — basically, if they keep their cats indoors, with proper catproofing, their neighbours will not complain.

While this might be true in most cases, there is always the possibility that vindictive neighbours would report (or threaten to report) the presence of cats to HDB over an unrelated issue — as a forum letter writer pointed out in 2019.

Thus, formally allowing cats in HDBs would allow these responsible cat owners to keep up their good work without fear of reprisal.

On the other hand, the rule changes being considered could make it easier for the authorities to take action against irresponsible cat owners.

At the moment, it may be difficult to trace the owner of an abandoned or lost cat, as there is no requirement for pet owners to have licences (regardless of whether they live in public or private housing) or for cats to be microchipped.

There is an existing pet dog licensing and microchipping scheme, and one of the things AVS is now considering is whether that scheme should be extended to cats.

If it does get extended, the owners of lost or abandoned cats can be easily traced and held accountable for their pet's welfare.

It could also allow for a clear and transparent framework for revoking the licenses of errant cat owners and removing their cats in extreme cases — in contrast to how there are presently no rules or guidelines specifying exactly when a cat will be removed from an HDB flat due to the owner's neglect.

Allowing cats in HDBs would also mean that the bulk of Singapore's HDB-dwelling population can officially adopt cats.

While it may be possible now for a HDB owner to secretly adopt a cat, being officially allowed to do so would ease the process, as organisations will be able to take the proper steps to ensure that the adoption is in line with regulations.

From "close one eye" to "open both eyes"

To sum up, if cats were to be allowed in HDBs, it would mean that HDBs could attend to all the surrounding issues and provide greater clarity on the dos and don'ts.

Which would be going from "close one eye" to "open both eyes".

And if you've ever tried winking for an extended period of time, you'd know that opening both eyes is a much more comfortable state of affairs.

But why were cats banned in the first place?

The Society of the Prevention of Cruelty to Animals (SPCA) pointed out in a December 2019 Facebook post that cats have been banned since the first public housing flats were built.

The present-day ban on cats in HDB flats can be found in Rule 3 of the Housing and Development (Animals) Rules, which came into effect in 1989. 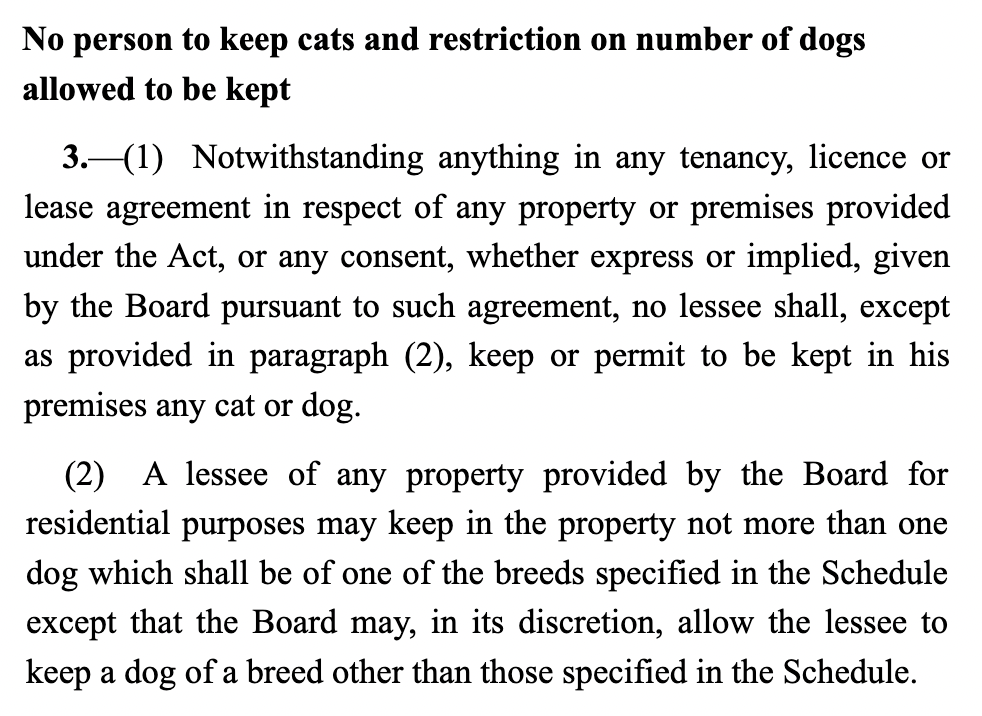 There was apparently no lengthy debate about this in Parliament, which had other pressing issues to discuss — such as how HDB flats were priced, for one.

But there was a brief exchange at the 1988 Budget debates, where Radin Mas Member of Parliament Chng Hee Kok proposed that dog owners living in HDB flats be required to register their dogs with their respective HDB Area Office, among other tightened regulations he suggested.

Registration, Chng said, would allow HDB to specify the size of the dog that could be kept in a public housing flat.

"Some residents therefore find that dogs are quite a nuisance in the estates. Owners do not keep their dogs on a leash. They let them run loose and the dogs go sniffing at passer-bys. They allow their dogs to run along the corridors and get into their neighbours homes. Sometimes this can be very offensive."

The issues Chng raised might sound familiar to some, as they are very similar to the reasons that HDB cites against cat-keeping in HDB flats.

In response to Chng, Lee Boon Yang (Minister of State for National Development and Home Affairs) said in reply: "Whether HDB should have more do's and don'ts, this can be considered."

Looks like the present public consultation on cats is going in that same direction, too.

So, why the need for public consultation?

Should the authorities decide to allow cats in HDB flats, it will be welcomed as a positive development by many, as the proposed rule changes do look like they will improve the overall situation for cats and cat owners in HDBs.

This is why you might think that a six-month-long public consultation on the matter is a little unnecessary.

After all, any change would just officially allow something that has already been unofficially happening for ages.

But, as with many things, the devil is in the details.

There are some who are opposed to having cats in HDBs, as Minister of State for National Development Tan Kiat How pointed out in the announcement of the public consultation.

And HDB has since revealed that it gets over one thousand cat-related complaints annually.

In past statements on the matter, the Ministry of National Development has said it would "balance the needs of different stakeholders" — something that can only be done after gathering those stakeholders' views.

Beyond addressing different views, public consultation may help the authorities to tackle some unanswered questions.

While it may make sense to change the rules to allow HDB owners to keep cats, there are still some unanswered questions about the exact content of the new rules.

This brings us back to the question at the start of this article about the equal legal status of cats and multiple dogs.

We know that multiple dogs are not allowed in HDB flats.

But will multiple cats be allowed?

One of the questions in the public survey asks how many cats should be allowed in a HDB flat: 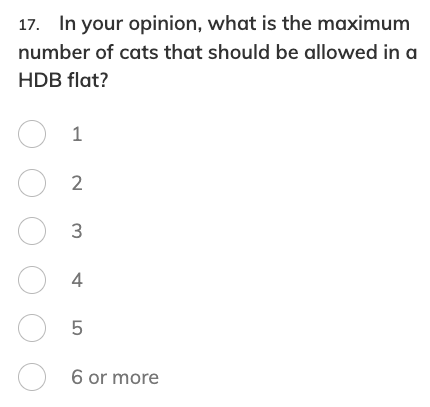 What will happen to HDB households that currently keep multiple cats?

Will they ironically be worse off after this public consultation and rule change, forced to decide which of their cats they will keep if there is a limit set on the number of permissible cats?

The survey also asks if rescuers and fosterers should be allowed to keep more cats than the average HDB homeowner. Thus, while allowing cats in HDB flats may seem like a simple matter, there are secondary issues — each attracting its fair share of differing views — which also need to be resolved before a decision can be made.

Top photo by AVS and via John T on Unsplash