A BlueSG car was caught on video making a right turn too fast in Bukit Batok, almost colliding head-on with one stationary car.

A video of the incident, which happened on Thursday, Sep. 22 at around 6:30pm, has been uploaded on Facebook.

It ended up hitting two other cars and a traffic light.

Vaanan Sivakumar, 28, the owner of the dashcam footage who was driving his yellow Kia Stinger, had just pulled up at the red light at a T-junction along Bukit Batok Road.

In less than 3 seconds, the BlueSG car was seen making the right turn from the opposite direction.

As it was travelling at a relatively fast speed, its tires were screeching and it could not complete the right turn properly, narrowly missing the Kia's bonnet by inches.

According to Vaanan, the BlueSG hit two other cars to his left -- a Honda Shuttle and another car with a learner driver inside.

The BlueSG car then hit a traffic light before coming to a stop.

Vaanan said a worker was beside the traffic light doing road works at that time and narrowly missed getting hit. 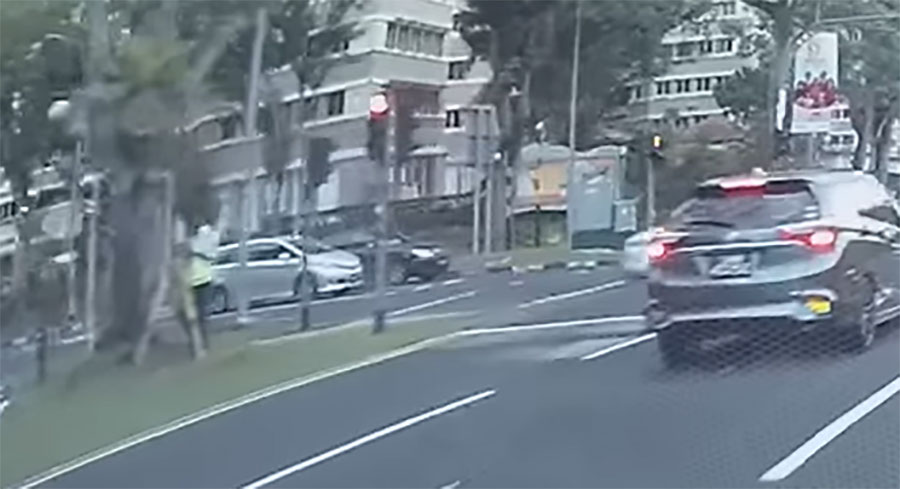 In response to a comment on his video, Vanaan said the screeching of the BlueSG car's tires was so loud at that time it was clearly audible in the footage and could be heard over the song playing in the car.

Vanaan could be seen in the video getting down from his car to inspect the bonnet.

His brand new car was unscathed.

Vanaan said he saw the BlueSG car's driver at the scene following the accident: "His face was red and in a state of shocked."

However, he did not speak to him.

He said: "I didn't communicate with him as my car had no contact, thankfully."