One lucky photographer has managed to spot a Sambar deer in Singapore.

In a 19-second clip uploaded to the Facebook group Singapore Wildlife Sightings on Aug. 19, the majestic animal can be seen strolling along, even looking in the photographer's direction for a couple of times.

Caught under the moon and street lights

Photographer Tan Yong Lin said he was holding his breath as he captured the deer with his camera.

As he was hiding behind a tree to take the shots, Tan was bitten by ants that had swarmed all over his body.

But he remained as still as he did not want to scare the animal off.

"Given how shy these creatures were, any slight movement would send them bolting back into the darkness of the forest," the photographer explained.

Tan eventually managed to take photos and video of the deer without using flash, thanks to the fact that the animal was idling near street lamps along the road.

It is rare to spot a Sambar deer in Singapore.

The photographer was lucky to have seen one real life, as according to one estimate from 2017, there are only 20 Sambar deer known to be on the island.

"The window of opportunity with these animals [is] small, and I have to treasure every second I have, to get some photos of these wonderful animals that dwell in the wilderness of Singapore," Tan said.

Many commenters who have not gotten the chance to see them thanked the photographer for sharing the videos and photos.

Watch out for them when driving

A commenter pointed out that these deers have been spotted in the Mandai Road area on several other occasions.

And while it's not ideal to reveal the location of where they were spotted, he said:

"Instead let's give the photographer all the credits he deserves, all the likes he can get for all his hard work, give all credits to the sambar deer group that advocate and protect the deers till it is increasing in numbers now." 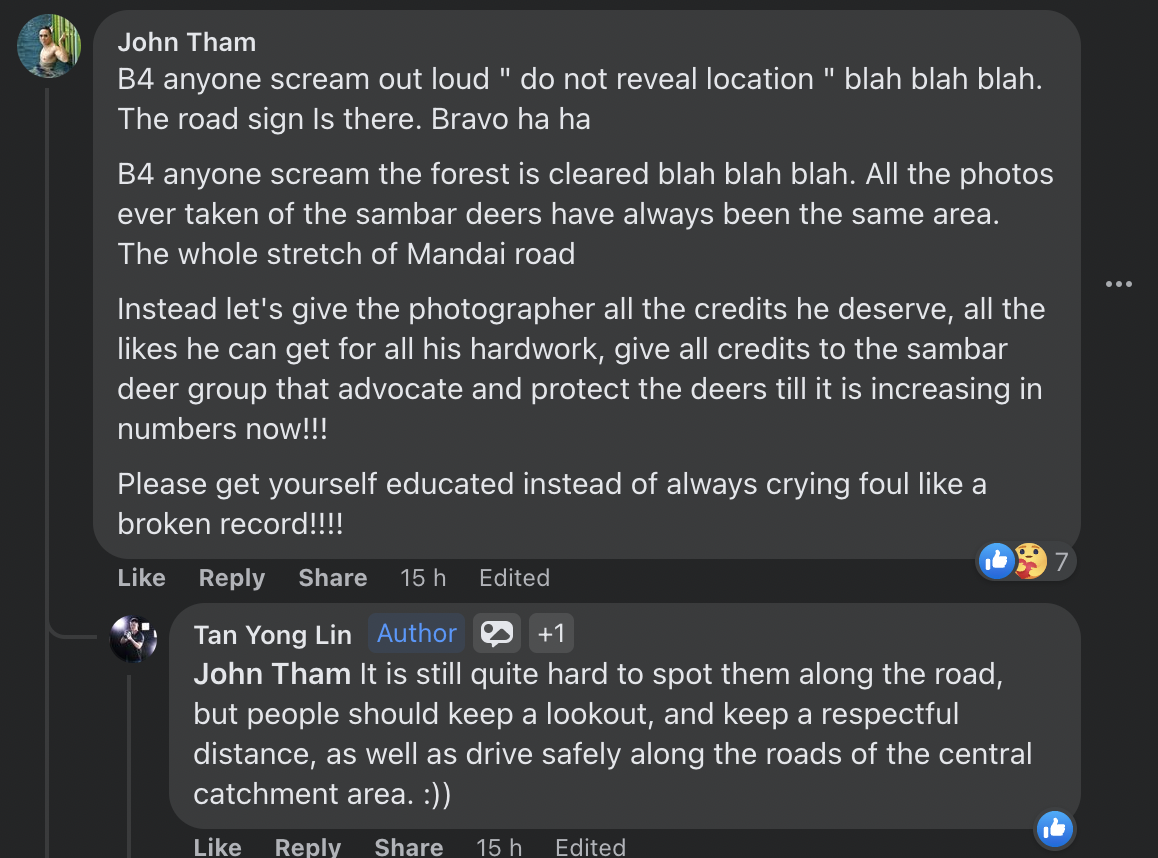 The photographer responded as well, saying that it was still not easy to spot them even if you're in the area.

He advised those in the area to keep a lookout, stay a "respectful distance" away from them, and drive cautiously.

You can check out more of Tan's works here, where he has photographed (what is presumably) another sambar deer on a previous occasion.