[Update on Aug. 7, 12:30pm: A Workers' Party spokesperson has clarified that the TikTok account @jamuslim does not belong to Member of Parliament Jamus Lim. This article has been edited to reflect the update.]

If you're a TikTok user, you might sometimes come across local politicians on your For You Page hopping onto the latest trends.

Low can be seen testing out the equipment in an Anchorvale HDB playground.

He had volunteered to stand in for Sengkang group representation constituency (GRC) MP Jamus Lim, who is currently away for a three-week fellowship in the U.S..

Such as checking if the playground's equipment is working properly for the residents' safety, as Low demonstrates.

Here is Low identifying a possible faulty equipment in the fitness corner of the playground:

The video was filmed as a POV (point of view) video, a TikTok trend where creators bring viewers into the scene by showing their perspective.

A quick search on TikTok reveals that there are personal accounts that are being set up and are linked to two WP MPs.

One is a personal account featuring WP MP for Aljunied GRC Gerald Giam.

The account posted its first video on Aug. 4, which is a clip from Giam's latest debate in Parliament about the Singapore Armed Force (SAF) amendment bill to establish the new Digital and Intelligence Service (DIS).

The second account is a personal account (@jamuslim), of WP MP for Lim, though there are no videos uploaded yet.

A WP representative told Mothership the @jamuslim TikTok account does not belong to the MP. 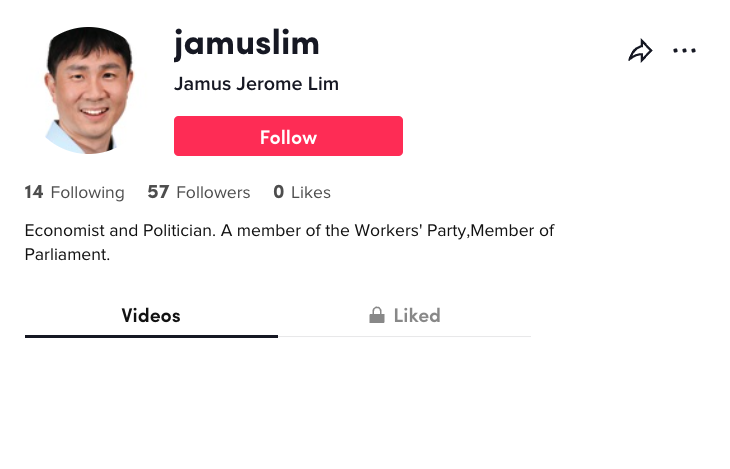 Other politicians on TikTok:

Images via @thehammertok on TikTok