A faceless rabbit outside Chinatown Point has been criticised for being "inauspicious" and "scary-looking," Shin Min Daily News (SMDN) reported after a reader called in to complain.

See it for yourself here:

Several more people that SMDN spoke to concurred, saying that the rabbit looked "strange" and even terrifying.

Lai, a 40-year-old man in the delivery industry, felt that since the Mid-Autumn Festival is a tradition, there was no need for decorations to be modern or unconventional.

Another 37-year-old in the civil service said that the rabbit needed features to be "cute".

However, a Korean tourist/art collector that SMDN spoke to provided a different perspective, explaining that there needs to be room for creativity within art, as each artist has their own ideas and aesthetics.

Another interviewee, a 25-year-old secretary, said it's not a bad thing that there's a variety of decorations for such occasions.

"There's still time to salvage the situation, it's so ugly!"

"The real name of the rabbit is 'vomit'!"

Note: This user is making a pun here, as the Chinese character for "rabbit" (tù) sounds the same as "vomit" .

"The rabbit is wearing a mask due to Covid-19, hence its facial features can't be seen! No need to go an extra step (of drawing its face)." 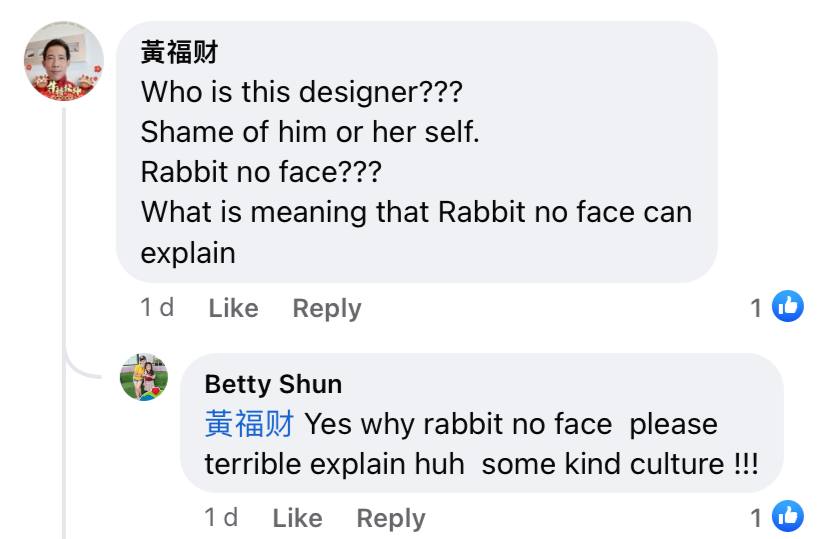 Although one user did have a rather pertinent observation:

"We're not celebrating the festival unless we're complaining about the decorations."

Competition by the mall

As it turned out, the celestial rabbit is actually part of the mall's Mid-Autumn celebration activity, which calls for shoppers to get creative by adding features to the rabbit.

The best entry stands to win S$100 worth of FairPrice vouchers, according to the mall's Facebook post.

After the competition ends on Sep. 1, one entry will be selected to "come alive"— likely meaning that the selected "face" will actually be drawn on the rabbit.

Attempts so far have been pretty good, although not all of them were submitted for the contest: 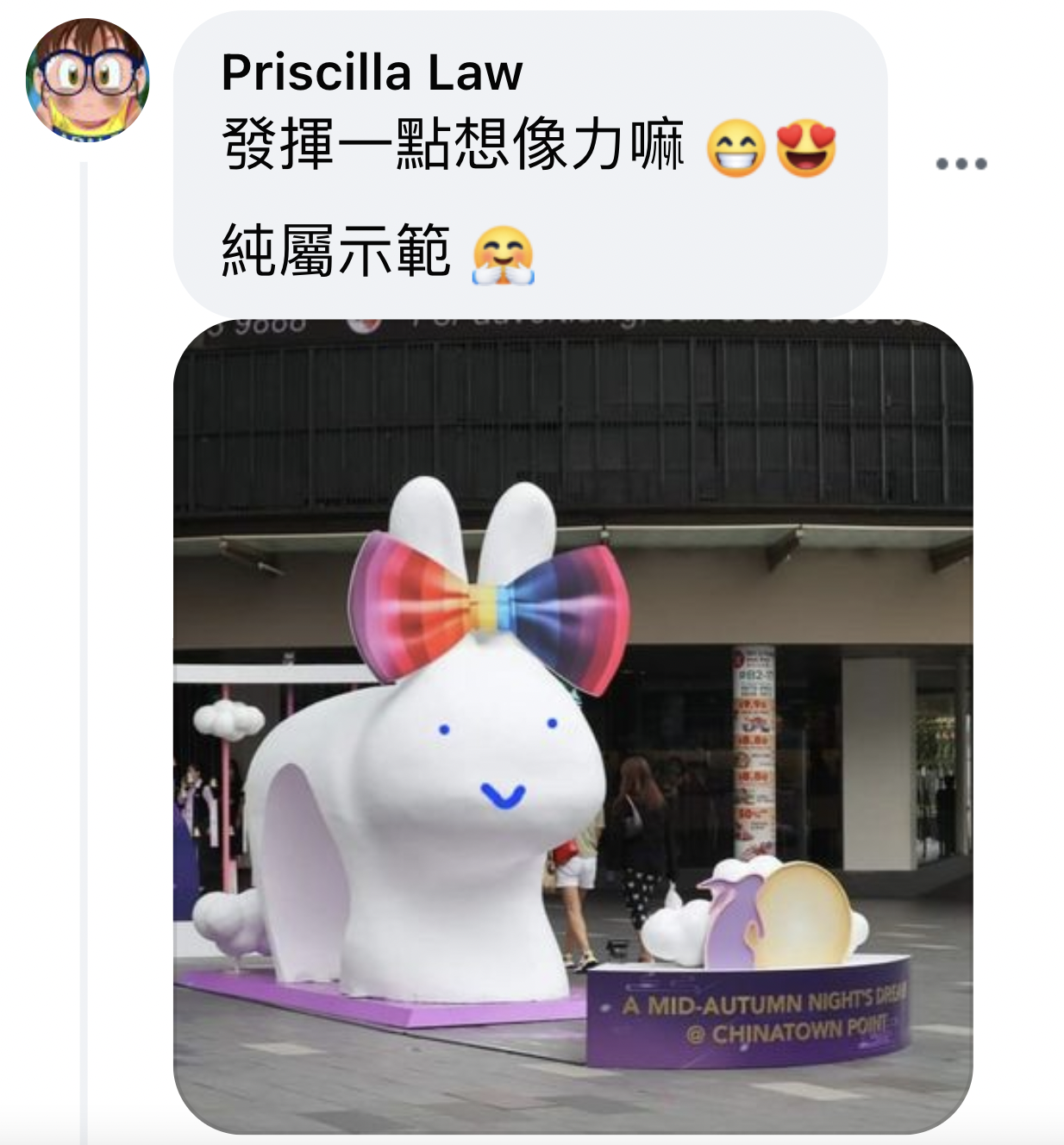 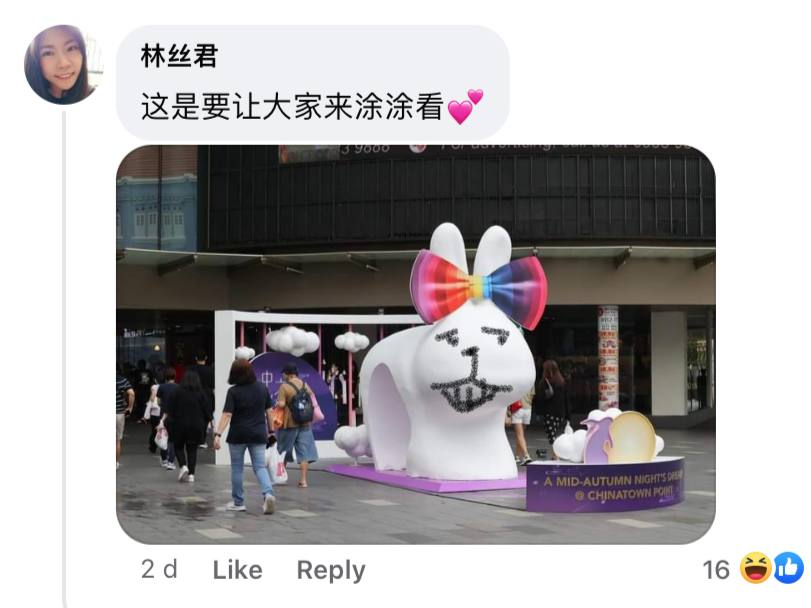 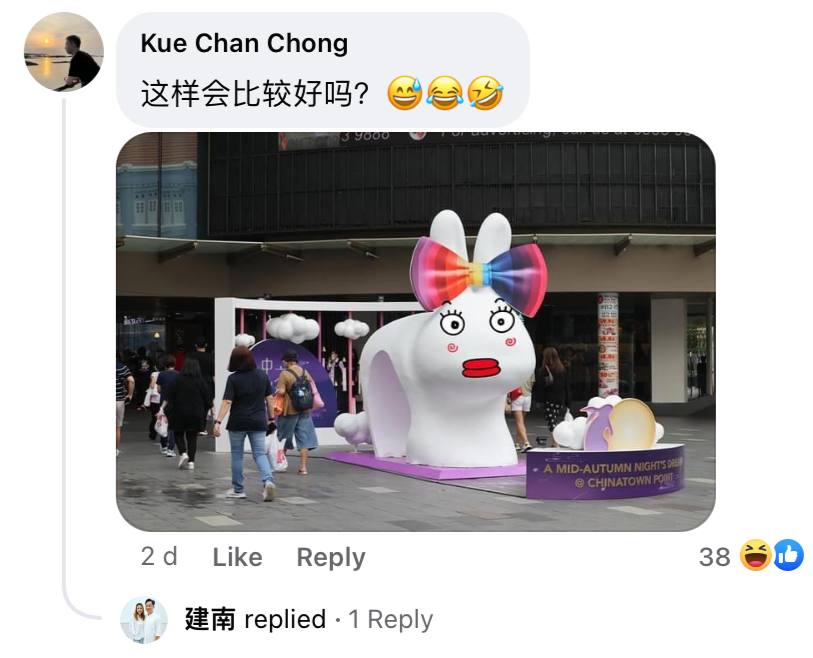 A date on the board indicates that the event will end on Sep. 30.

Official light up from Aug. 26

Elsewhere in Chinatown, the official light-up has also begun.

This year's installation, themed "Blossoming Flowers under the Full Moon", sees a 10 metre-tall diorama with jade rabbits and pastel-coloured mooncakes as the centrepiece.

For those who are wondering, Chang'e is not entirely retired yet.

After an eventful two years in 2019 and 2020, she is now perched among the decorations spanning the streets of Chinatown.

But she does look quite different from previous years.

Congratulations! You have made it to the end of the article (whether by speed-scrolling or otherwise). This alone qualifies you to apply for the role of a Lifestyle & Entertainment writer at Mothership. Click here to find out more.
Top photo via Chinatown Point's Facebook page, Priscilla Law/Facebook