DBS raised the interest rates for its Multiplier account in a bid to help customers with rising inflation and expenses, according to its head of consumer banking, Jeremy Soo.

This marks the first time that DBS has raised the interest rates after they were cut three times in 2020.

DBS added that the changes took effect from Aug. 1.

For this account, customers will get higher interest rates if they transact in larger amounts with DBS or POSB, and in more categories, including DBS or POSB credit card spending, mortgage payments and investments.

In order to be eligible, customers must credit their salaries or dividends to DBS or POSB, or connect SGFinDex to DBS NAV Planner, as well as transact in one or more of the categories, such credit card spend, DBS PayLah! retail spend, home loan instalment, insurance or investments.

Interest rates across the different transaction amount categories have been increased, with the highest increase being 0.8 per cent for spending in three or more of the aforementioned categories.

Here are the tables for the full changes: 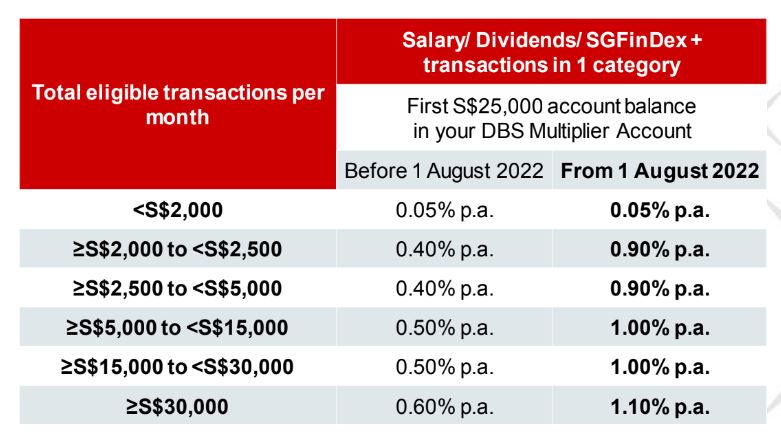 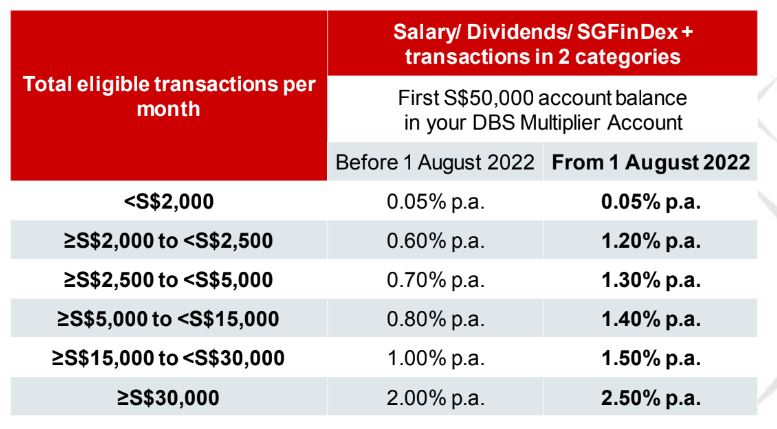 How the Multiplier deposit account works is that a customer who credits the salary plus has transactions in two eligible categories amounting to a total value of S$5,000, for instance, the earned interest will be 1.4 per cent, as compared to the previous 0.8 per cent, on the first S$50,000.

Soo noted that the income of nearly half a million of the bank's customers lagged behind inflation, and that expenses had increased twice as fast their income over the past year.

He added: "While the effects of inflation cannot be easily avoided, it is now more critical than ever for us to do all we can to collectively lessen the pain for our customers, especially those in the most vulnerable groups, by protecting their savings and grow their wealth."

"The latest revisions to the DBS Multiplier programme are among the initiatives DBS/POSB is reviewing to ensure our customers have access to relevant solutions and the know-how to save more, spend wisely and invest smartly to give them a stronger footing to navigate today’s uncertainties but not compromise on their future financial wellbeing."

Rates have risen as the United States central bank has been trying to tame surging inflation.