It started with an episode of “Modern Family”.

“There’s this scene where Cam and Mitchell were both trying to propose to each other, or something like that? Because they’re both guys, so they didn’t know who’s the one to propose, right? So in that episode, they were trying to figure it out and it ended with both of them proposing to each other.

Why a joint proposal?

Tong Xueyin explains that there were several reasons behind her idea for both she and her now-husband, Daniel Ong, to propose. For starters, Tong isn’t one to sit back and wait for her partner to make the first move. In fact, when the couple first started going on dates, Tong hatched a whole plan to ask Ong if he wanted to officially date.

“On our third date, we went to an Okinawan restaurant. And because he had spent one year in Japan, I thought his Japanese should be quite good. So I bought Koi bubble tea, and in Japanese, “koi” means romance. So it was kind of a bilingual pun.

And at the end of the date, I took out the Koi bubble tea and I asked him, ‘koi shimasu ka?’ which is like, ‘do you wanna fall in love?’” 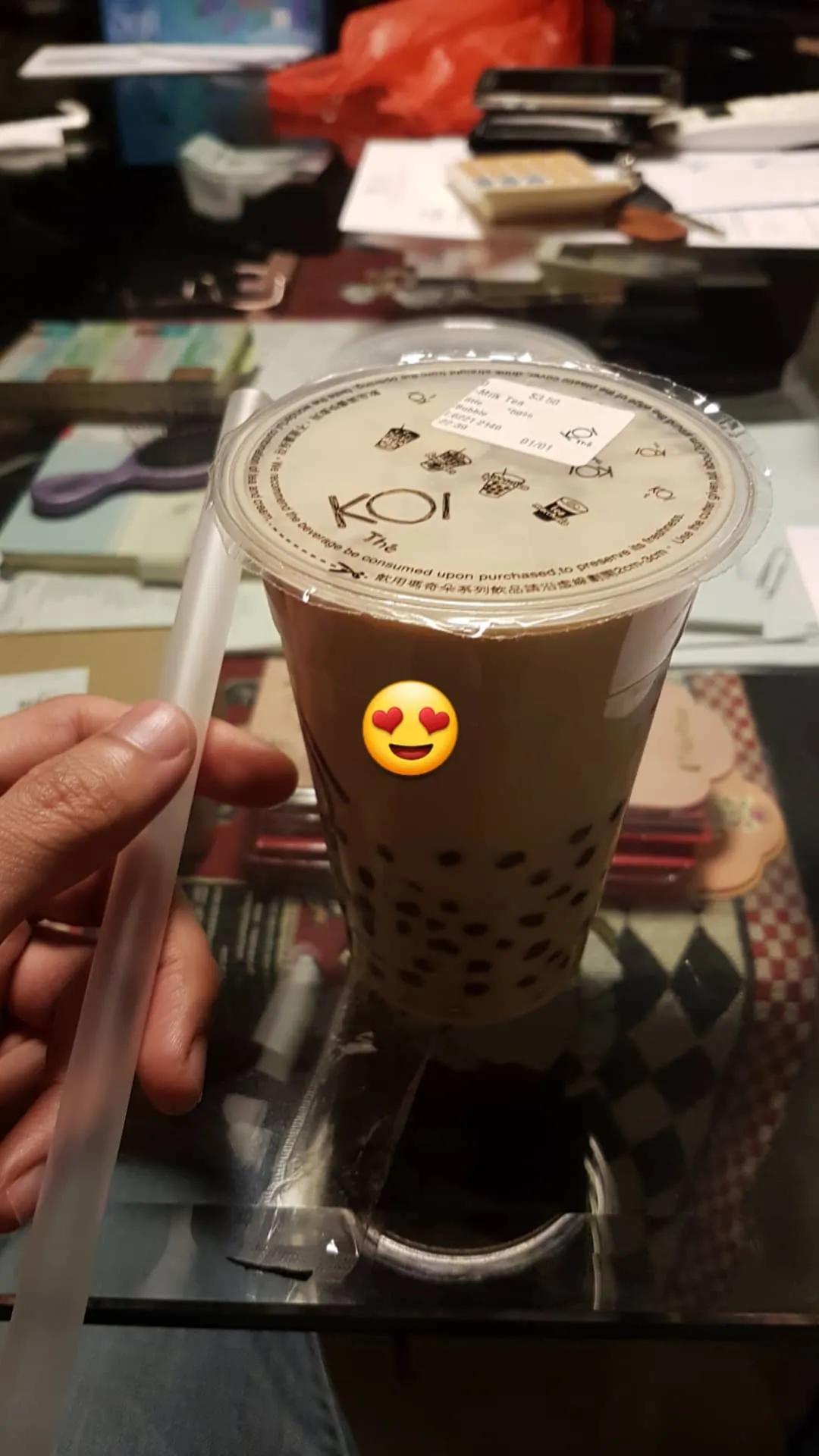 Unfortunately, it did not quite go according to plan.

“Little did I know, his Japanese was so lousy that he didn't understand it at all!” Tong says exasperatedly.

She ended up repeating herself a few times, before explaining it to him in English. “It was so embarrassing, oh my gosh!” she recalls.

Thankfully, once he understood what was going on, Ong said yes.

Going into more detail about why she suggested a joint proposal, Tong says she didn’t want to be surprised “in a bad way”, not knowing how to react while feeling a need to react in a “proper way” since it was a proposal.

Secondly, by the time the joint proposal idea came up, the two of them already knew they wanted to get married, so there was no surprise there.

And finally, Tong didn’t want Ong to feel like he needed to plan a big event all by himself and keep it a secret.

“Also, I wanted to choose my ring,” she laughs. “I don't want him to choose it!”

Ong admits that he was surprised and did feel some hesitation about Tong’s suggested joint proposal.

He acknowledges that it is becoming less rare nowadays for a woman to propose to a man, but still felt it was a bit “unusual”.

He was confused about how both of them proposing to one another would work, logistically.

Not to mention, Ong had actually already planned a huge proposal for Tong: “So when she said that she wanted to propose to me, it was like, ‘Argh, my plan is destroyed!’”

In fact, if it had been up to Ong, he probably would have already proposed by then. You see, back in 2019, just a few months into their relationship, Tong went to the U.S. for a year-long master’s degree program.

During that time, she set a rule:

“The rule was that we cannot make major decisions during LDR. Because it’s only 10 months right? And to be fair, it’s not a fair representation of your relationship with someone.

So essentially, during the period when I'm away, we cannot get engaged and we cannot break up.”

When Ong planned to visit her in March the following year — about one year after they officially became a couple — Tong reminded him: “Don’t come here and propose.”

Her straightforward communication worked, as Ong had been “lowkey thinking about” asking her to marry him during the trip, as he felt ready for the next step.

However, he respected Tong’s preference to only start planning for marriage when she returned to Singapore.

He did manage to sneak in a fake “proposal” though, in Stardew Valley, a role-playing video game the pair played online together.

How did Ong eventually come around?

This brings us back to Tong’s suggestion of a joint proposal after she returned from overseas.

Ong explains how he came around to the idea after a few days of thinking it over:

“Knowing Xueyin, it's something that she would want to do, and I don't want to deny her that opportunity and that experience. I mean, it's not like I'm the one who decides, right? It's both of us.

And I thought it was a good thing to do — that both of us would get the chance to ask each other to get married.”

For Tong, who was also inspired by a friend and his wife, who proposed separately to one another, she was also thinking about Ong:

“It’s always [expected that] the guy must put in the effort to surprise the girl, but yeah, I think it'd be nice for Daniel to have a special day as well!”

How do you pull off a joint proposal, practically?

The couple now sees how a joint proposal ended up saving them a lot of trouble.

It allowed them to share the workload and ensure that it was something that both of them wanted.

“It was like planning a party, I guess!”, Ong explains.

When I ask them how their parents reacted to their unconventional plan, Ong says:

“I think we’re pretty unconventional to begin with. We’re both generally quite weird — I mean, that’s what people say. So it wasn’t surprising for them — or at least for my parents — to know that we’re doing something unique like this.” Tong and Ong stood at the end of a public pier in Keppel Bay, focusing on each other while getting gawked at by passers-by; a sports team of secondary school boys and yacht passengers.

The only other attendee, aside from their families who were watching from afar, was a friend who they had asked to be their photographer.

Tong and Ong took turns reading their proposal speeches to each other, with Tong going first. 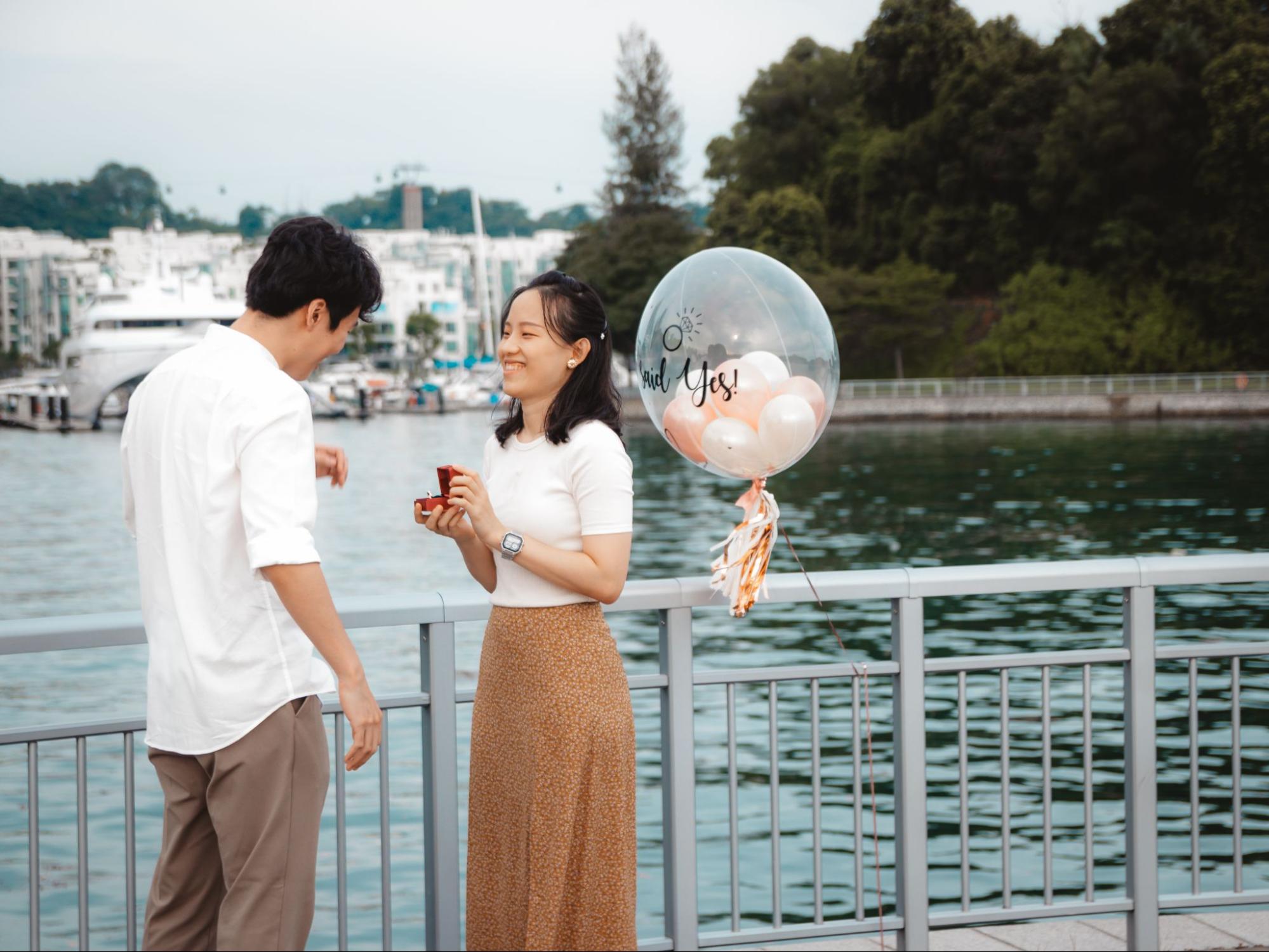 “Because it was her suggestion so it would be good for her to initiate and kick it off, like initiate the proposal. And then for me to finalise and wrap it up,” Ong shares.

He goes on, jokingly, “Actually, because I had a really good proposal video that I didn't want to overshadow, or set the bar so high. So I let her go first and then I [showed her] the video.”

Spoiler alert, both of them said yes. 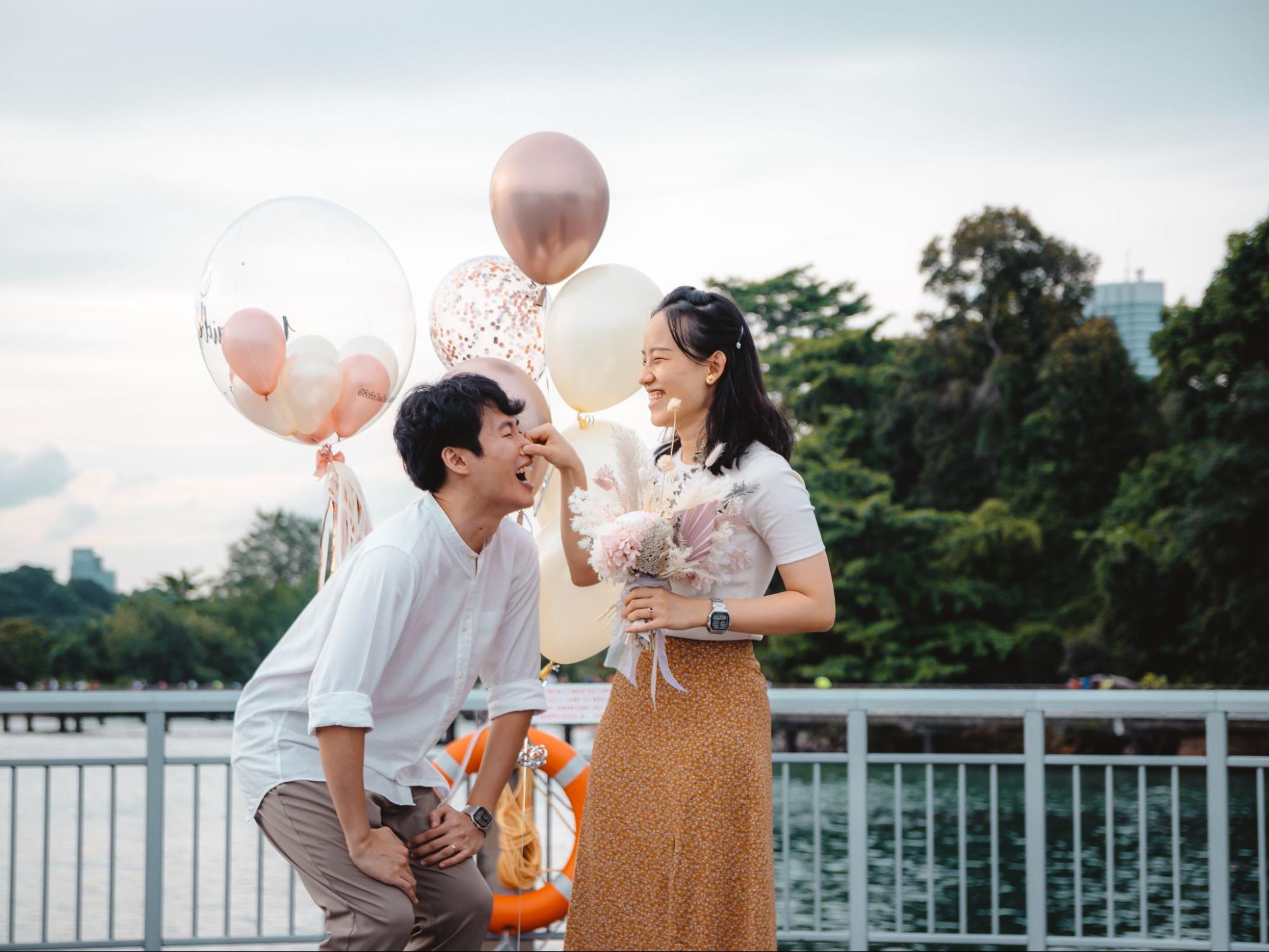 What else do you need for a joint proposal?

Ong, a self-professed romantic, planned an elaborate proposal, only for it to turn out quite differently from what he initially expected.

This would happen yet again, in the lead-up to the couple’s wedding.

“He really took ownership of a lot of things in wedding planning,” observed Tong. “Way more than the regular Singaporean man does.”

“He had this crazy spreadsheet with every single detail; a breakdown of the programme details and the emcee script. And he did everything from scratch.”

But when Tong wanted a part to play too, Ong was happy to oblige.

“I think I'm fortunate because Xueyin is a person who wants to get involved, wants to pull her weight, who knows what she wants and wants to contribute and be part of the whole process. So it's easy for me to just take a step back, or say, ‘Yeah, please come get involved. Let's do it together and let's make it 50-50.’”

“But he definitely did more,” Tong adds quickly. “I think it's an ideal relationship kind of thing, where both partners are pulling their weight. […] I think even now, in our lives, everything that we do is a partnership,” Ong says, as the two of them smile and fist-bump.

Over the course of the hour and a half I spend talking and laughing with Ong and Tong, I realise that to understand their joint proposal is to understand the dynamics of their relationship — it is truly, as Ong put it, a partnership.

Tong shares her gratitude for the relationship that they have:

“I am very fortunate that Daniel’s someone who celebrates my success, who likes that I know I want and I go for it. He has always been very supportive, and I think that's not something that can be taken for granted.

He's also very hardworking — so for the wedding preparation, even though he says ‘50-50’, no, he did most of it. Legit. So yes, I snatched a good deal.”

All article photos courtesy of Tong Xueyin and Daniel Ong. Some quotes have been edited for clarity.