A bizarre fight involving two men in Yishun was streamed live on YouTube on July 5, taking the concept of "kayfabe" to its most extreme.

The fight involved hardcore wrestling fan Kurt Tay and another man, whom Tay referred to as his "hater".

The video was originally streamed live on YouTube on July 5 on Tay's account for close to 17 minutes, but has since been made inaccessible.

According to a person posting as Tay on the Hardwarezone forum on July 6, it was claimed that he and his opponent had been called up to assist with police investigations following the fight.

However, copies of the same video were put up on other social media accounts.

The video started with Tay arriving at Yishun MRT station. 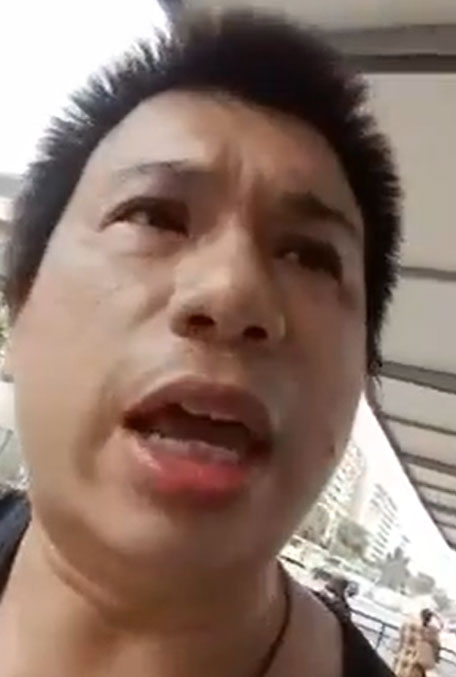 Addressing the camera, he said: "Okay, so he want to talk big, you know, say I got no balls to meet him. Then he say, 'Oh, he can finish me in 3 minutes' time."

He added: "So this hater has been talking s*** about me for the past few months. Okay, so I'm coming here right now."

Tay said he was sure the man who had antagonised him was also in Yishun, as he saw him post on Instagram about arriving there.

Upon meeting each other in the MRT station, Tay's opponent, dressed in green and accompanied by another person, asked if they should settle the score at the void deck. 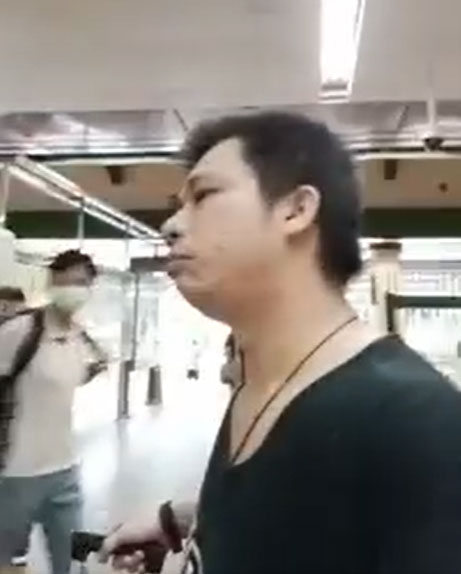 Tay responded as if he wanted to get things on there and then: "You want to go void deck? Go void deck for what?"

Upon exiting the MRT station, Tay's opponent handed over a form for Tay to read. It is not known what the contents of the form said, but it is assumed to be an indemnity form to not hold Tay's opponent accountable for injuries.

They then walked for about 2 minutes to a nearby void deck and prepared to start their duel.

Before the fight began, Tay's opponent removed his shoes while Tay set up his camera to stream the event live. The pair even shook hands before throwing any punches. 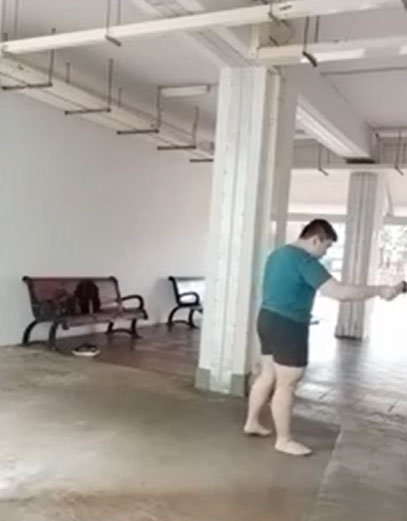 The situation was surreal as multiple passers-by could be seen strolling past where the fight occurred. 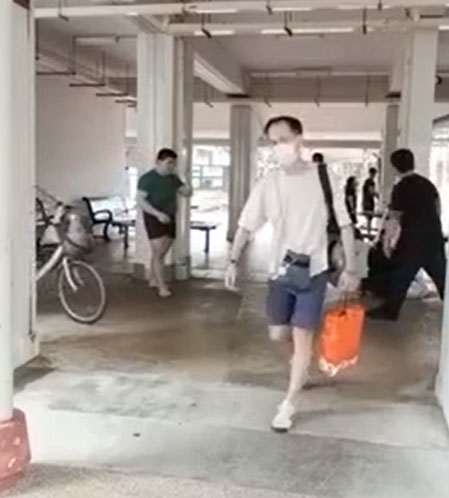 The fight started some 7 minutes and 30 seconds into the live stream.

Right off the bat, Tay was punched and kicked within seconds of making physical contact. 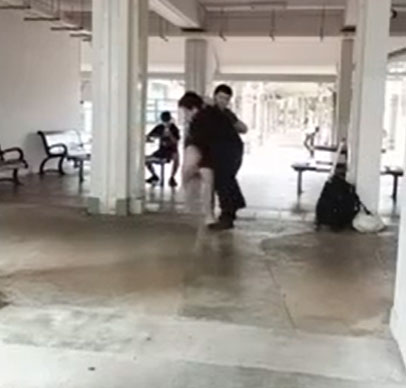 He was seen rolling on the ground while his opponent taunted him.

Tay was then seen diving head first into his opponent, only to be thrown onto the ground, where he started flailing. 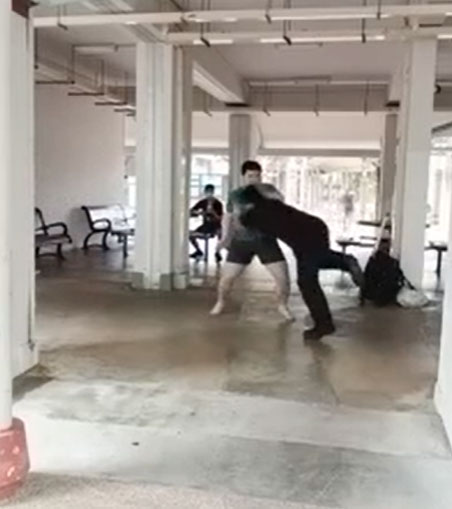 At the 9-minute mark, Tay took a shot to the face and stumbled backwards. 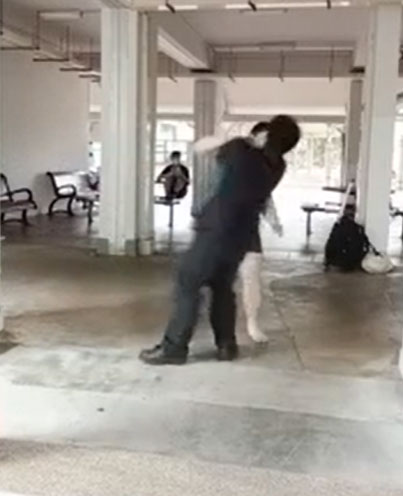 About 30 seconds later, Tay took another shot to the face. 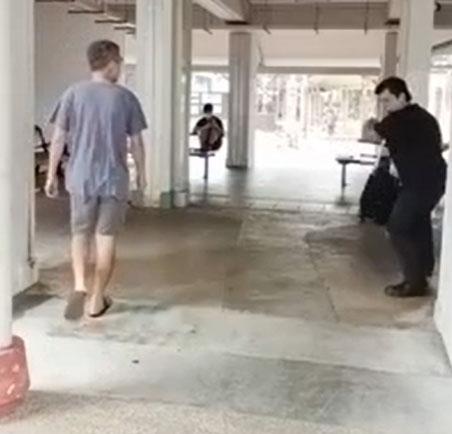 After this point, Tay gassed out and asked to take a water break and to catch his breath.

Once the duel restarted, Tay ate a kick to his lower body. 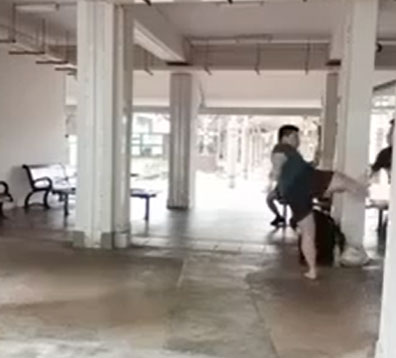 He then asked to halt the fight to readjust his position multiple times, so that he can appear in his live stream.

Tay then took one more punch and two kicks before admitting defeat. 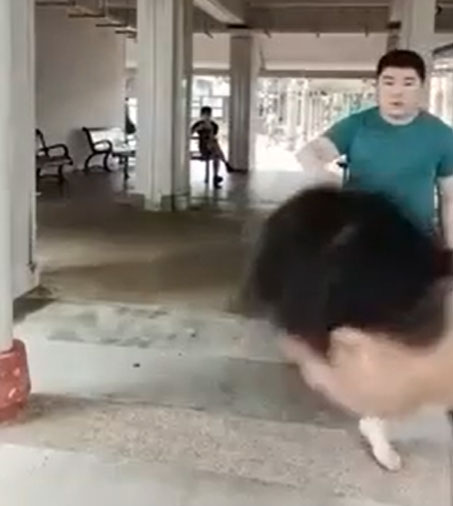 The two men then shook on it.

It appeared they stopped fighting when police officers showed up and were seen walking across the void deck, but it is not known if they were alerted to respond to the incident. 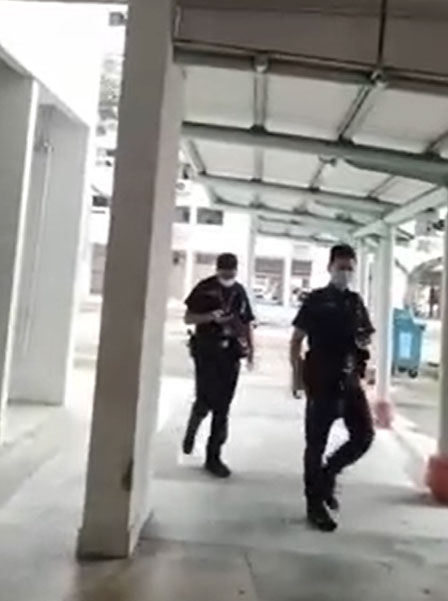 The police officers appeared to have walked away off-camera.

Tay said to the camera while perspiring profusely: "I lost to him. He's the winner. Never mind."

The opponent and the other man with him then took photos with Tay.

Tay expressed his surprise at the photo request.

Many of the comments mocked Tay and slammed him for being rash and reactive.

One forum user, which appeared to be Tay's account, responded in his inimitable style that he was provoked to act and only fought to prove himself.

He reasoned that he showed up to fight a more seasoned and trained fighter despite not having practised fighting in the past five years.

Tay also admitted that he got hurt.

He wrote, in his unique style: "My Stomach no injury due to many Fat I hav.However my finger is swollen until very Jialat definitely need c Doctor.My Elbow got cut bleeding & my lips also got bleeding".

Tay's other comments in the Hardwarezone forum are collated below:

Tay wrote: "My Stomach no injury due to many Fat I hav.However my finger is swollen until very Jialat definitely need c Doctor.My Elbow got cut bleeding & my lips also got bleeding"

Tay wrote: "That Guy challenge me to a fight & says I got no balls fight him & many Haters laughing at me says I Humji meet him so I Buay Tahan they says me & accept d challenge"

Tay wrote: "Is unfair.I more than 5 years never do sparring already.D last time I do sparring is 5 years ago at MMA school while this Guy has been training regularly is not a fair fight.I should hav few months training before d actual fight"

Tay wrote: "I agree he didn't use Full Force or else I Black eyes 👀 already.What I m saying is This is not 🚫 a Fair fight because I more than 5 years didn't do sparring while he is training regularly"

Tay wrote: "I m asking Wen Loong 2 revenge 4 me by sparring with him mWen Loong is The Best Fighter In The World🌎🌍I m His Good friend.Wen Loong experience fighter say less than 2 mins can defeat him"

Tay wrote: "Good News!Good News!My Good Friend Wen Loong has agreed 2 revenge 4 me!He says will spar With him At Evolve MMA school.Wen Loong learnt MMA there.Wen Loong don't want Void Deck.I will text That Guy if he got balls 2 spar with my friend Wen Loong.That is a reason y I call Wen Loong The Best Fighter In The World🌎🌍I seen Wen Loong fight before very fast very good in Fighting.Wen Loong is piss off 📴 that guy embarrassed me & will revenge 4 me.Wen Loong is Confident can defeat that Guy in less than 2 mins"

Tay wrote: "When my friend Wen Loong destroy him less than 2 mins u c who Xia Xuay"

Tay wrote: "He don't even dare accept my friend Wen Loong challenge at proper MMA school in the Ring when in d 1st place he already agreed"

Tay wrote: "Steven Lim do sparring before in His YouTube Channel.If illegal y Steven Lim Post u explain to me"

Tay wrote: "I got proof that Guy is a Humji Kia.He himself admit he Only dare 2 target weaker ppl like me!At 1st he thought 💭 my friend Wen Loong cannot fight accept d challenge but after find out My Friend Wen Loong is Real Fighter From Evolve MMA he change his mind & rejected d challenge.He don't know what is call Man Of Yr Words.After I find out he is a Bodybuilder I still keep to my promise 2 meet him even though I m weaker than him.I got more balls than him because he doesn't dare spar with Wen Loong who is better than him"

Tay wrote: "Even though that Guy show mercy to me but what he doing is not 🚫 good Just because he don't like a online Celebrity he go Jio him fight 2 hurt him never think I got family 2 feed my Son, My Daughter,My Parents.Dont like me can don't watch my video no need 2 hate me"

Tay wrote: "My Parents r looking after my children what just leave kids at center"

Tay wrote: "Next Time When I m Super Rich,I myself,my Son & my Daughter all 3 of us Must go to Evolve MMA 2 learnt Martial Arts.Must get a Black Belt in MMA so that next time got bullies can self Defence.Go learnt Wrestling got no use.Real Fight Wrestling moves no use.I go copy what Goldberg did In d Survivor Series Match,Goldberg 1st Move is Spear.He runs & Hit Brock Lesnar with The Spear.Then Brock Lesnar holding ribs in pain.Goldberg runs & Hit another Spear & wins the Match in less than 2mins.But When I copy Goldberg it doesn't work In Real Fight!That Guy didn't follow d script & let me Spear.Wrestling Fake & Useless In Real Fight"