A woman went into "Karen mode" in her attempt to secure a parking spot at the Marina Bay Sands car park recently.

A video shared by SG Road Vigilante (SGRV) showed the woman standing in a parking spot on May 15 to reserve the space.

A driver entering the car park spotted the empty lot, where the woman in yellow top and white pants was standing in, and decided to just occupy it, even though the woman was making it clear she wanted the spot. As the car was reversing into the lot, the woman did not budge and even knocked on the vehicle repeatedly in an attempt to stop it from moving into the space further. The woman eventually gave in and walked away. She appeared to have walked to the front of the car, and the furious knocking continued as the driver took the parking space.

According to the post by SGRV, the woman said she was trying to "chope" the space for her husband's car.

After the driver took the space, the woman threatened to report him to the police, according to the tip-off.

Most commenters were not on the woman's side.

Some called out the woman for being entitled and others said she was endangering her life even though the driver was not entirely right in this case as well.

On the HardwareZone forum where the video was discussed extensively, one commenter tried to make the false equivalence that this case is similar to the incident where a white Bentley was seen insisting on its way and driving into a security personnel at Red Swastika School in Bedok North. 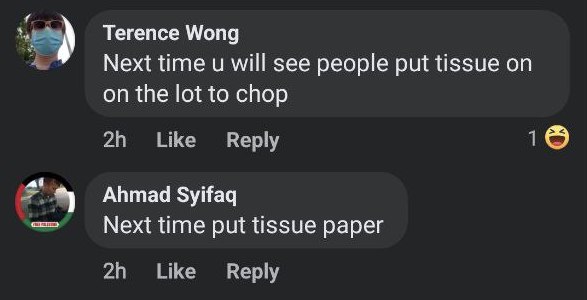