Veteran hawkers often find themselves in a difficult situation when age starts catching up with them.

Many express a desire to continue serving up the food that has kept loyal customers coming back for years, conscious of how their humble fare embodies Singapore's cultural heritage.

Yet, they struggle to hand over the reins to the next generation.

Some resort to offering precious recipes for sale, to varying success, even if they offer to train their successors before stepping aside.

It's easy to imagine why many younger people shy away from the long hours and hard work of a hawker's life, on top of all the uncertainty that comes from being self-employed.

As Wong would come to realise, even his own family's affinity with his grandmother's century-old recipe would potentially fade over time -- if the business were to come to an end with his father's retirement.

Faced with this prospect, Wong left the stability of his job in the air force, and stepped up to the plate — or bowl.

In the five years since Wong took over as the second-generation owner, business has more or less doubled.

Wong's part in the business' expansion comes on the back of an online order system and islandwide delivery, as well as improved kitchen facilities at the business's second outlet, a 50-seater eatery on the ground floor of a HDB block, just a five minutes' walk from Paya Lebar MRT station. 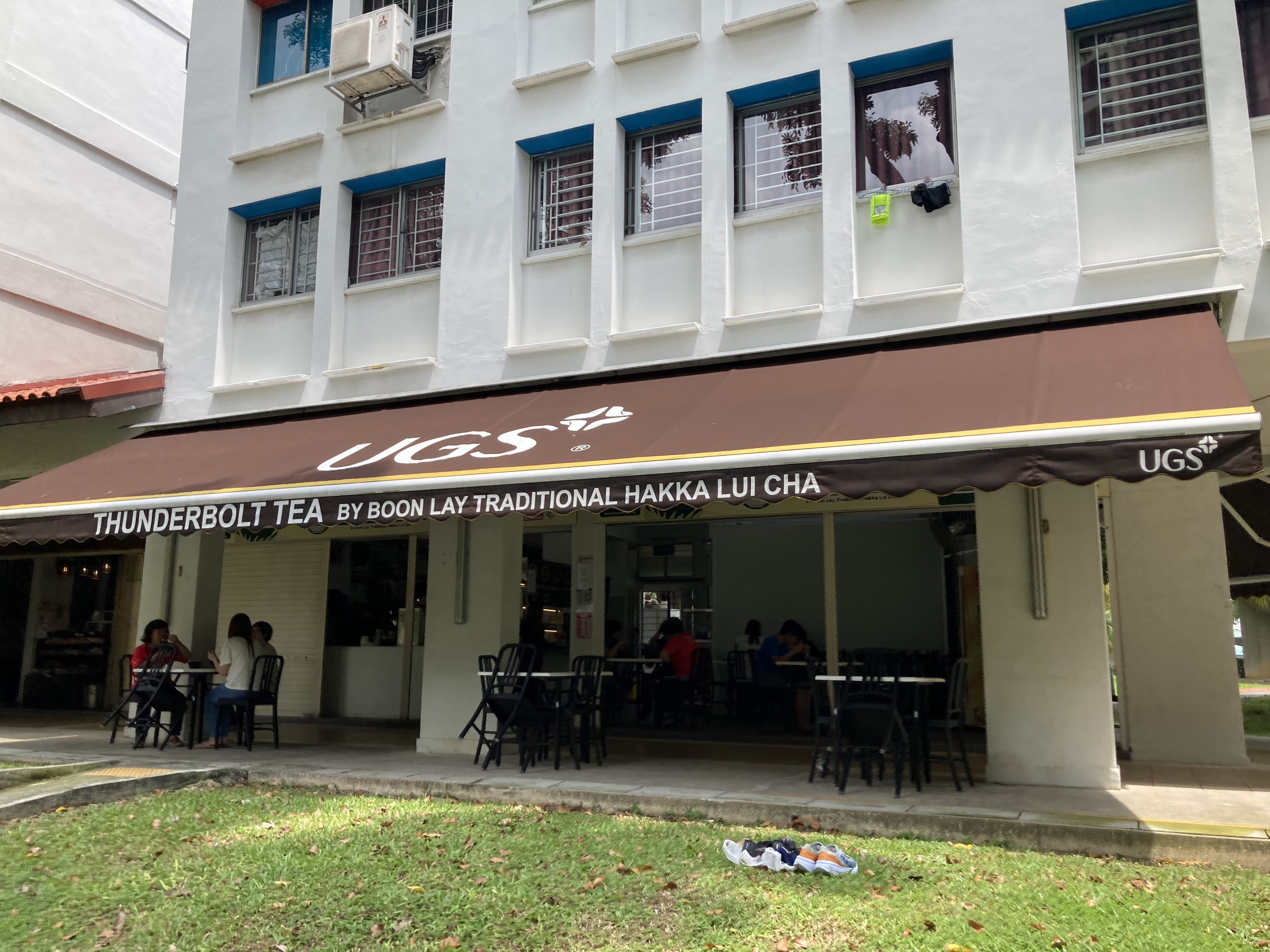 Here's a look at what it took for the spunky millennial hawkerpreneur (Wong's preferred job title) to find the "success" in "succession" — fidelity to the dish's roots, along with a shrewd sense of how to modernise and optimise things without taking away from the authenticity of the food.

As thunder tea rice is still quite an uncommon dish in Singapore, I usually try it whenever I encounter it at eateries and coffeeshops.

Although I'm no connoisseur, I must say that Thunderbolt Tea's signature offering is very, very good.

Like many renditions of the traditional dish, the rice bowl offers a wonderful range of textures ranging from its crunchy peanuts, to tender tofu cubes, to chewy whole grain rice (or white rice, if you prefer); and of course, a variety of vegetables (long beans, cabbage, leek, and sayur manis) stir-fried just right.

What's almost shocking, however, is that the dish is full-flavoured, and quite savoury.

"It’s actually not very green!" says Wong, grinning triumphantly as he watches me dig in.

It's difficult to get this from just looking at the food, but although the dish mainly comprises vegetables, the umami flavours of dried shrimp and preserved radish (or cai po) permeate every mouthful.

It's somewhat oily — but not greasy — and definitely does not taste like health food or a salad.

Not meant to be "healthy" food

Many would consider lei cha to be a healthy option, and this would indeed be the case, at least when comparing it to many other hawker food options which don't include as much in terms of vegetables.

But, Wong points out that it was not originally conceived as health food. Instead, it was the product of a nomadic culture that made use of dry ingredients (like rice, beans, and tea) that could be stored for a long time.

In fact, it is "fatty and oily and savoury" food that's more common in Hakka cuisine.

It's their heritage that we have to thank for such culinary wonders as braised pig trotters and salt-baked chicken, among others.

Another distinguishing feature of Thunderbolt Tea is the use of sayur manis (which means "sweet leaves" in Malay).

The leafy vegetable, common in the Malaysian province of Sabah, is a bit of an enigma, as scientists cannot identify why it causes lung damage if eaten raw.

Thankfully, its toxicity can be easily neutralised once cooked.

Expect a texture similar to that of kai lan leaves, but thinner and slightly chewy.

Tea paste is actually what gives lei cha its name.

Fittingly, Thunderbolt Tea's name also comes from the tea paste, as it is what most clearly differentiates its offering from that of any other lei cha place.

I remember my first tentative sip of it as a bewildering experience.

It's pastel green and very liquid, but somehow tastes creamy and savoury.

While the exact recipe for the tea paste is a closely-guarded secret, Thunderbolt's website has some clues.

Besides peanuts, the paste is also made with basil, green tea leaves, sawtooth coriander, and sesame seeds.

There is that peanut-ty sweetness, but it's also slightly savoury, and overall, very light.

It also leaves just a mild herby aftertaste, which Wong tells me has been pared down slightly to accommodate the majority of customers who may not be accustomed to the herbs.

Lei cha is not a dish that one can easily prepare for themselves, given the labour-intensive preparation required to chop all of the vegetables and other ingredients.

There's also the fact that the tea paste must be painstakingly hand-ground with mortar and pestle — though Thunderbolt does it with machines these days.

This is why Wong would often have to wait for family gatherings to eat it, on occasions like Chinese New Year, where relatives would come together and prepare the ingredients in large batches.

Each person could then scoop their preferred share of each ingredient according to their preference.

This, Wong says, is a tradition that carries on to this day in some Hakka households.

But it wasn't till around 20 years ago that Wong's father started the business as a hawker stall.

Then, lei cha was difficult to find outside of Hakka families' personal kitchens and was relatively less known in Singapore compared to the ubiquitous Hainanese chicken rice, satay, or roti prata.

Seeing the potential of the dish, the older Wong took the plunge and started Traditional Hakka Lui Cha in Boon Lay.

The plan from the start was simple: To sell lei cha made with the family's prized recipe, which had been passed down from Wong's grandmother, one of many Chinese immigrants to Singapore in the pre-war years.

To this day, the family stays connected to their relatives in Hepo — a sub-district of China's Guangdong province — where lei cha originates.

Wong tells me that the dish was what would be prepared for his family when they went to visit.

(The large characters on the banner say: "Hepo lei cha". The Facebook caption translates to: "Boss is back in his hometown!")

This contact generates marketing value too, as Wong claims that Thunderbolt is one of the only lei cha joints in Singapore that still has connections to its roots in China.

Marketing is one thing, but how does it translate to the food?

Pretty well, according to Wong, who receives comments from Hakka customers saying that the food at Thunderbolt is "homely", and reminds them of what they used to eat while growing up.

Growing up with the business

Wong's own growing up experience played a part in him eventually taking over the business.

He remembers helping out at the stall from a young age, together with his siblings.

That being said, Wong says he never really thought of taking over the business until 2017.

He'd noticed that age was catching up with his father, even while demand for the dish seemed to be ramping up.

At the same time, Wong says his career was at an inflexion point.

"It was a point in my career in the air force where if I decided to stay on, I'll probably stay on a lot longer."

Like his father before him, Wong's decision to get into the business of selling lei cha came out of recognising untapped potential, and a desire to keep the tradition alive.

"Even up till now I have friends who sort of know this dish, but who haven't tried," Wong says.

"I realised, eh, actually I need to push it out a bit more, and try to let people know. Because it is quite an interesting dish, historically and culturally."

However, the younger Wong had the benefit of building on the processes his father had established over the years.

"We know that the product kind of works in its own way. It's a traditional dish, it's tasty, and there's a sort of traction going on for lei cha consumption over the years."

Wong's first step toward taking over the business was to spend around six months at the stall in Boon Lay learning the ropes.

It was of course important to Wong that the recipe and the taste of the dish would remain consistent even after he took over, even as he set out to modernise and grow the business.

This, he explains, is why he hasn't expanded more aggressively — the concern that running too many branches would not be sustainable in terms of capacity and quality control.

Personally experiencing the 4am start time helped him understand the constraints of operating out of a single hawker stall, especially if the brand was to expand online.

Today, the larger kitchen at Thunderbolt's Paya Lebar outlet allows them to meet growing demand from online delivery orders, while catering to walk-in customers too.

More cold storage also allows for prep work to be done the day before, which allows for a slightly later start time for Wong and his workers.

The larger kitchen also paved the way for a new menu item: Hakka style fried pork, which was introduced in response to requests from meat-loving customers.

While Wong served me a portion on the house, I could see myself happily parting with their (very reasonable) price of S$2 for that extra indulgence.

"Our original stall name is 'Traditional Hakka Lui Cha', and there's no way you can copyright that," explains Wong.

The name "Thunderbolt Tea" gave the business something they could claim as their own, while allowing them to stand out from other brands online.

Wong tells me his initial plan was to have his father retire "as soon as possible".

But this changed soon enough, when Wong started to realise that his father was none too keen on completely abandoning his familiar routines.

Thus, on a typical day, the elder Wong can be found at his original hawker stall in Boon Lay, though he no longer does all of the hard work.

He shares that his friends from northern parts of China have not even heard of lei cha, and imagines that one fine day, Thunderbolt could perhaps expand overseas, from Singapore back to China, bringing the cultural exchange full circle.

Till then, the business continues to grow at a modest, steady pace — at least, for now.

Opening hours: 9am to 2pm daily