Some Singaporeans who either had no plans to travel overseas or wanted some time outdoors over this Labour Day and Hari Raya Puasa long weekend headed to Changi Point Ferry Terminal to try and get on a boat to Pulau Ubin.

Unfortunately for these people, however, their attempt to get away from the mainland for some peace and quiet was less successful as they were met with hundreds of others who coincidentally had the same idea.

Hundreds of people in queue

TikTok user @botakbonsai, who had planned on visiting Pulau Ubin, was greeted with a snaking queue of people waiting to board the boat on Monday (May 2).

The video showed hundreds of people standing in a line that started from the ferry terminal and stretched around Changi Village.

People in the queue were armed with picnic gear, bicycles and luggage.

There were also young families with children.

People often head to Pulau Ubin to hike, kayak or cycle. There are also camping grounds and scenic picnic spots on the island.

Others may visit the island to fish or bird-watch.

Why the long queue?

Many who saw the video were perplexed as to how so many Singaporeans all decided to show up to Pulau Ubin, of all places. 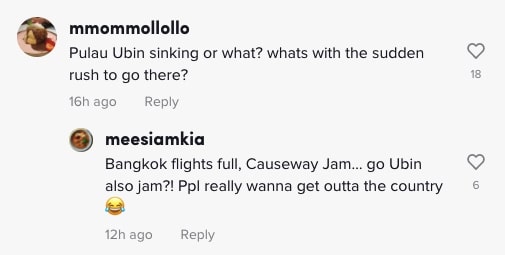 The TikTok user also mentioned that it was his first time seeing such a long queue for the boat.

Another commenter likened the queue to the crowds spotted during the Omega x Swatch watch collection launch in Singapore.

One person pointed out that the bumboat used to ferry people to the island can only accommodate 10 to 12 people per trip, which may have contributed to the wait.

According to NParks' website, the bumboats have no set departure schedule and will set off once there are about nine to 12 passengers on board.

Another video uploaded today (May 3) showed that the queue for the boat to Pulau Ubin is still going strong.