It's always fun to discover Singapore mentioned in overseas pop culture, but the depictions aren't always the most accurate (such as this instance of a Bukit Batok condo making an appearance in an episode of animated sitcom "Archer").

A "Singapore" character in a Thai television series became the source of quite a lot of amusement for Singaporeans due to his unique and quite inaccurate use of Singlish.

"Didn't know that the Singaporean accent is just LAH"

Digital content creator Zhi Kai shared a clip of the character from the 11th episode of The Judgement, a Thai television drama, on TikTok.

In the clip, one of the show's female main characters, Som, bumps into a stranger with a camera on the street.

"Hello lah, I'm Singapore," the man says, with an extremely unnatural emphasis on the "lah".

"I'm a photographer lah. I walk along to take a photo on the street and I saw you ah."

After Som asked him who gave him permission to take a photo of her, the photographer answered:

"Oh. I'm sorry lah. You looked so beautiful, I cannot stop myself. I will delete it lah!"

"Oh, thank you lah," the man replied, continuing with his alleged Singlish.

After some more conversation, Som gets into a taxi and says goodbye to the photographer, saying cheekily, "Nice to meet you too... lah!"

Here's the full scene, for your viewing pleasure:

Speaking to Mothership, Zhi Kai said that he burst out laughing as soon as he heard the photographer say, "Hello lah," despite being alone in his room.

The scene also appears to have struck a chord with many in Singapore, as Zhi Kai's TikTok video has been viewed more than 113,000 times, garnering hundreds of comments within 36 hours of it being posted. While others utilised humour to express their amusement: 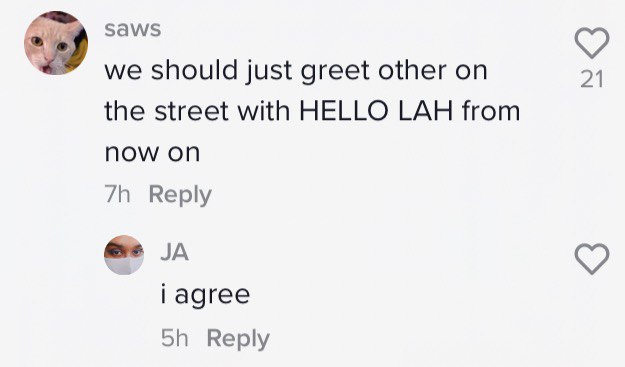 While Zhi Kai was amused by the "lah"s and inaccurate accent, he says he didn't think that they were a big deal because "the [Singaporean] character was not a bad person or having any unhealthy stereotypical Singaporean behaviour".

Zhi Kai said that he began watching The Judgement because it was recommended to him on Netflix, and he frequently watches Thai content.

He feels that issues covered in the series are important and relevant to Singapore as well:

"The series does highlight very important issues and messages like victim-blaming culture, social media bullying, sexual consent, sex under the influence of alcohol, and more importantly, empowerment and community support.

These topics are not so well-discussed here in Singapore, and I believe there is much work to be done in this area."