It's Jeremy Cheong, informing me that he would be arriving half an hour earlier — at 2.30pm — for our 3pm meeting.

I chuckle at his text. 😲 and 😱 were my exact reactions when I first heard of Cheong's staggering feat — namely that he is a longtime forum letter writer who has had about 180 letters published in mainstream media over the past decade.

If you have ever tried submitting a letter to the press to get it published, you would know that this isn't an easy endeavour.

A bit of a question mark, a little bit quirky(?)

He arrives at 2.22pm, blonde (courtesy of a S$9 hair dye product from Sheng Siong, I later learn) and dressed in a smart navy polo tee.

Up close, Cheong is a bit of a question mark. Some might even call him "quirky".

The 38-year-old can be awkward at times; sometimes he avoids eye contact when talking. Sometimes, he trails off mid-sentence as his mouth catches up with his mind. Most times, he's confident and self-assured, elucidating his thoughts on why he is very insightful and very clever.

But above all, Cheong is clearly passionate about and very proud of his letters to the press.

They have been painstakingly cut out or printed out, laminated, and neatly compiled in a little folder, with little "sign here" labels affixed to the parts where he signed off "Jeremy Cheong".

I marvel as his letters begin to take over the table that we're sitting at. In total, Cheong estimates that he has submitted about 150 letters to The Straits Times, 20 to 8 Days, and 10 to Today over the past decade.

"This was the first time that I wrote in," he says, brandishing a particularly large newspaper clipping.

"Why is this important? Not because it was the first time I wrote in but because this shows the date. I didn't realise it was 10 years ago lah."

The decade-old letter was — I realise, with mild amusement — a rant against the authorities for 1) closing a much-beloved community library, 2) converting a couple of void decks into a family centre, and 3) intending to build a block of studio apartments for elderly folks at Toh Yi Drive.

All these were, as per Cheong's tirade, "arbitrarily imposed" upon Toh Yi residents and they — or at least, he — had had enough.

"I wasn't happy having one block of seniors spoiling the harmony," he admits.

"Because Bukit Timah was mainly for good schools, education. So by having one block y'know as an 'old folks home', I just didn't—I just felt—

Okay I know, I know—

I am Singaporean...but I'm always very critical of the government's execution. So anything that I don't agree with the government, I've always made myself clear."

That 2012 letter was his way of claiming ownership of his estate, says Cheong. It was him reacting to yet another perceived failure of the authorities the way he knew how — by expressing himself through his writing.

"I'm not afraid to express my mind. I believe in free speech — I shouldn't be here in this country," he giggles conspiratorially.

And Cheong was over the moon when his rant was published by The Straits Times, never mind that the newspaper's framing of his letter — contrasted side by side with an outsider's plea for Singaporeans to be more accepting of the elderly — wasn't the most flattering.

Perhaps it is the exhilaration of seeing your own words in a national broadsheet. Or maybe it is the satisfaction of knowing that your views and your thoughts are being heard (or, in this case, read).

In any case, that first forum letter, published in all its glory in 2012, marked the start of a journey that snowballed into an obsession.

Over the years, Cheong has made his mark (and is leaving behind a legacy in laminated newspaper clippings and archived microfilms), on a variety of issues.

Seriously, it is an extensive list, ranging from green rebates for taxi customers to the safety hazard that is a narrow passageway at Hai Di Lao.

Cheong has suggested increasing airtime for Crimewatch, blasted SingPost for not putting enough security on its large parcel mailbox at the Bukit Timah Post Office, asked train operators to designate train boarding doors for the elderly, ruminated on the sunset days of the F&B industry, tackled an alcohol-sale ban on a bar in a university campus, and warned about the deleterious effect of the property trend of smaller-sized private property on population planning.

Phew. And this is just the tip of the iceberg.

"There was one year, I appeared once every month and everyone in my church was like, 'Wah Jeremy you very famous!'"

The lottery of the forum

Getting your letter published is very much a game of chance.

"It's actually a lottery. Every day, we try our luck and we pitch something in response to whatever, y'know...so if they like what we pitch, we get chosen."

And like most games, there are ways to increase your chances of "winning", well to Cheong at least.

Over the past 10 years, he has learned to treat his trial-and-error approach to submitting forum letters as an education. Whenever his letters are chosen, Cheong sees it as tacit approval from the forum editor, signalling the type of content that works. 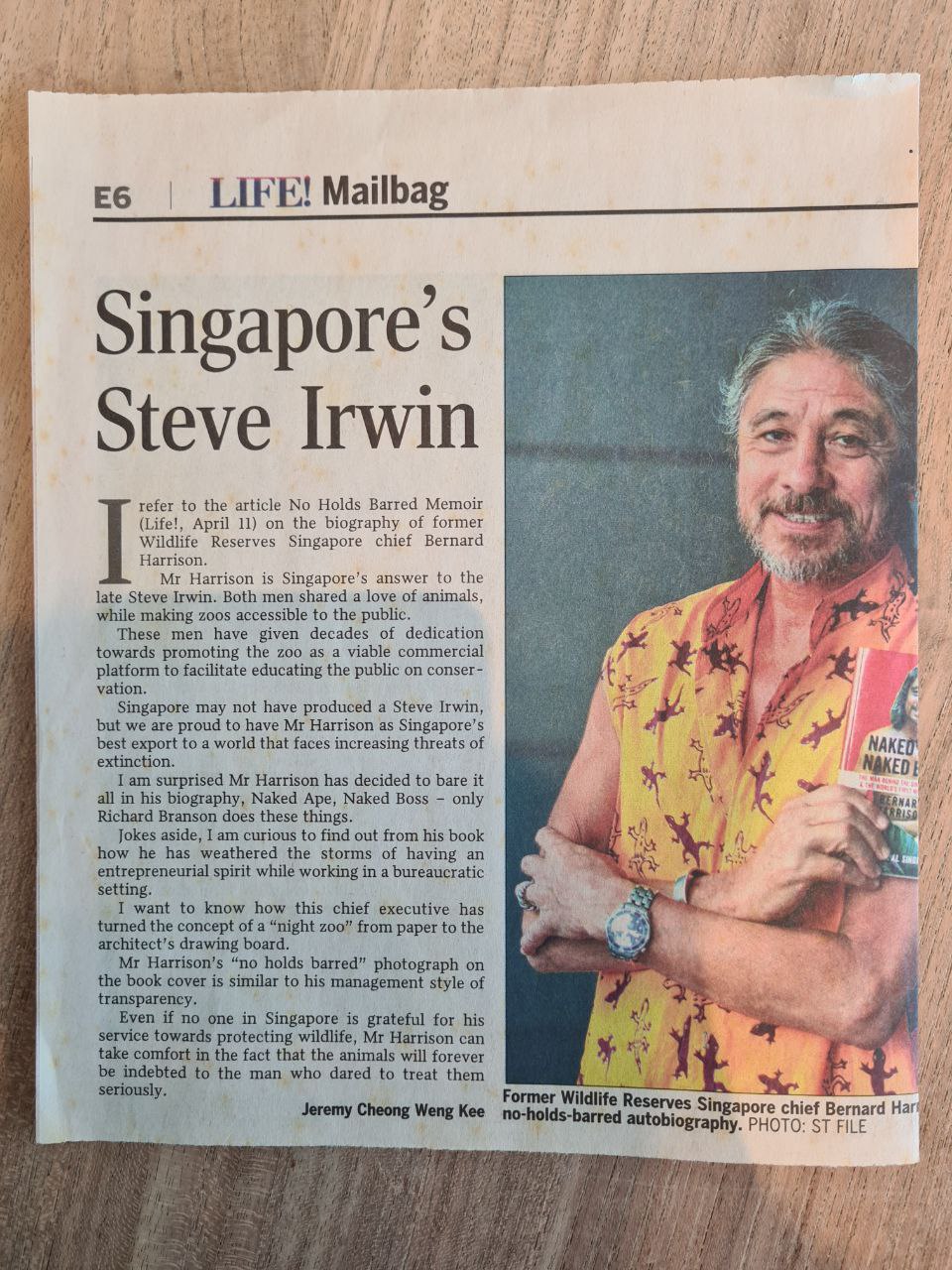 "The editor taught me that turnaround time is [very short]," and

"The Straits Times taught me how to pitch my ideas."

Over time, he interpreted these cues as tips on how to refine his submissions.

Firstly, your topic has to be current. No one wants to read about yesterday's news. If you are writing in response to an article that is published today, you have to write your piece today, says Cheong.

"I think for me, the most important thing about writing is to have timing...you need to know when the time is right to pitch it, or y'know, when the iron is hot."

Cheong's next tips involve a bit of educated guesswork.

"Try and guess what the editors want," he explains. Very much in the same way that a writer pitches a story to their editor, Cheong sees himself "pitching" his letters to the forum editors.

And think about what kind of emotive response your letter might elicit from readers.

"So whatever you read here," he says as he gestures to the spread of letters on the table, "it is supposed to create a certain response."

A cruel turn of events

"What motivates you to write so frequently to the press?" I ask.

Two reasons, he says. Firstly, he wants to use his writing to encourage others to write as well. Second, Cheong wants to offer discourse.

"There's always a backstory. Everything that the media publishes is very one-sided. So my job as a reader and my response, is always to provide a discourse."

As he is talking, my attention shifts to one of his letters that he had so thoughtfully printed out for me to keep.

Peeking out from under the pile, the words "brain tumour", "diagnosed", and "rare disease" leap off the page.

I realise, with a jolt, that Cheong was referring to himself in the letter.

Up to this point, not once did Cheong volunteer this (arguably important) bit of information that is central to his life story, as if it's something he deigned insignificant in the grand scheme of things.

It turns out that when he was 20, Cheong was diagnosed with hypothyroidism. One month later, doctors found a hypothalamic tumour growing in his brain.

The tumour was removed successfully, thanks to a very prompt neurosurgical operation.

But in the process, Cheong also lost his hypothalamus and his pituitary gland.

Later, a biopsy of the tumour revealed that Cheong has a rare disease called Langerhans Cell Histiocytosis which damages tissues and causes lesions to form in the body. To deal with this condition, Cheong has to take multiple pills each day.

However, that's not the only thing he struggles with.

All neurosurgical procedures inevitably result in some form of brain injury. Cheong says that he wasn’t informed about this after the operation, and had to find out the hard way.

Because of brain surgery, he says that he developed major depression and an extremely volatile personality that went undiagnosed for nine years (he was so aggrieved that he wanted to march up to the neurosurgery department at the hospital and erect a sign that said, "If you have surgery, take note of the head trauma.").

"I felt—I think that was the most cruel thing the doctors did to me," he says softly.

"So—So, I would like to say that Straits Times really grounded me because even though I—Y'know I was very volatile for so many years, but every time I wrote and every time I was chosen and published, it brought me great joy."

Being selected, being chosen, being published — that, in Cheong's eyes, is one of his greatest achievements in life.

"I hope to be remembered as a Singaporean who offered a perspective and a discourse at that time...and I think if I can continue doing that, I will be relevant and I will be selected."

On the bright side, Cheong is now convinced that linking his personal experience to news topics of the day is a "sure tio" way to getting his forum letters published in The Straits Times.

"Again, The Straits Times editors taught me secrets — it's not good to always complain...if you read a story and then you share your own personal experience, then I think that is gold standard," he quips brightly.

Of epilogues and erotica

As we wind up our meeting, I ask Cheong about his future plans.

Through our short time together, I've grown to be quite fond of his quirks and his unique way of seeing the world.

He currently writes this erotica on a local gay forum and has plans to migrate to Australia one day, to see where this talent can lead him.

Meanwhile, he has no plans to stop writing forum letters. In fact, he is toying with the idea of submitting his letters to the South China Morning Post.

As we say our goodbyes and he walks off, leaving me with that stack of printed letters, I think about this hour-long ride, one that started off with me intending to interrogate Cheong but which left me questioning myself.

If I can be completely honest, there was a part of me that was a tiny bit sceptical about Cheong prior to our meeting.

I thought that writing to the press reeked of self-importance, the work of people who were simply out of touch with the world.

But here, Cheong's backstory is flipping these presumptions on their heads, forcing me to reevaluate my narrative and my views about the people behind these letters.

More importantly, it is forcing me to think hard about my reasons for meeting Cheong.

As I reflect deeper, I realise that my intentions for meeting him were not completely altruistic, perhaps the very same intentions behind a newspaper's decision to shine a spotlight on a Toh Yi resident's ageist, NIMBY rant.

But as I take Cheong's words to heart and search for that backstory, I find a man whose aspirations are not all that different from yours and mine.

Here is a man who trying his hardest to find meaning in the broken pieces of his life, yearning to be heard amid all the noise, striving to make an impact.

And if we were to think about it, isn't that what we're all trying to do with our short time here?