The Chinese city of Shanghai is currently under a strict lockdown that has been extended on Apr. 5 after a fresh wave of Covid-19 cases emerged.

The extension meant the entire city, with its 25 million people, is under lockdown with no definite end date in mind as the authorities attempt to stamp out the virus under the country's "zero Covid strategy".

Residents are not allowed to leave their homes, not even to collect essential supplies.

As a result, many have complained of a shortage of food and other essential supplies as the city struggles to get groceries delivered due to factors such as a lack of delivery workers, even as the local authorities continue to censor such public discontent, and push out news that highlight health workers helping the people instead.

Making use of state-approved hashtags to voice their anger

Seemingly fed up with the local government's handling of the situation, several Chinese social media users have taken to popular microblogging platform Weibo to voice their frustrations.

However, to make sure that their grievances were heard, they made use of two state-approved hashtags by including them in their posts, even though the content had little relevance to the hashtags themselves.

As pointed out by Ma Wenhao, a journalist with U.S. state-owned broadcaster Voice of America (VOA), the hashtags were "Shanghai handled several pandemic-related rumours" and "The U.S. is the largest country of human rights deficit".

It's gone unnoticed by many. So I felt like I should properly document what just happened on Weibo today.

Netizens in China, for just a few hours, got to unleash their wrath on the Chinese government for how they handled the Covid crisis in Shanghai and other social issues.

They were most likely approved by the state as topics of certain sensitivity don't usually get to top the chart, Ma conjectured.

The two hashtags topped the trending list for a few hours before other topics replaced them.

Some users who used the hashtag "The U.S. is the largest country of human rights deficit" expressed their discontent at the government for criticising a foreign country, which they saw as an attempt to divert attention from the country's domestic problems, instead of addressing local issues head on.

Utilising a sarcastic tone, while they appeared to be criticising the U.S. due to the attachment of the hashtag, they were in reality slamming the Chinese government.

Here are some posts that have resonated with many other Chinese online users, as anger mounted over the government's refusal to budge from its "zero Covid" stance. 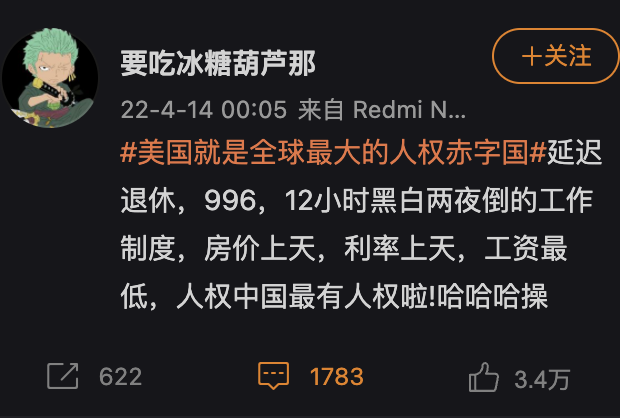 One post made a reference to a recent case of a woman who was discovered chained up in a Chinese village, and later found to have been a victim of human trafficking. "Yes yes yes, a woman in the U.S. was chained up and forced to give birth to eight children. Later the government even rewarded the man who chained her up by building him a house and giving him money.

Americans are all working 996, the labour law is just there for show, and there's no labour union. Their mortgage interest rates are the highest.

In the middle of a lockdown, their people were still forced to repay their housing loans even though they couldn't feed themselves. The American government is really too evil, too scary, fortunately I live in China."

Some even stopped all pretence and simply addressed the government directly. 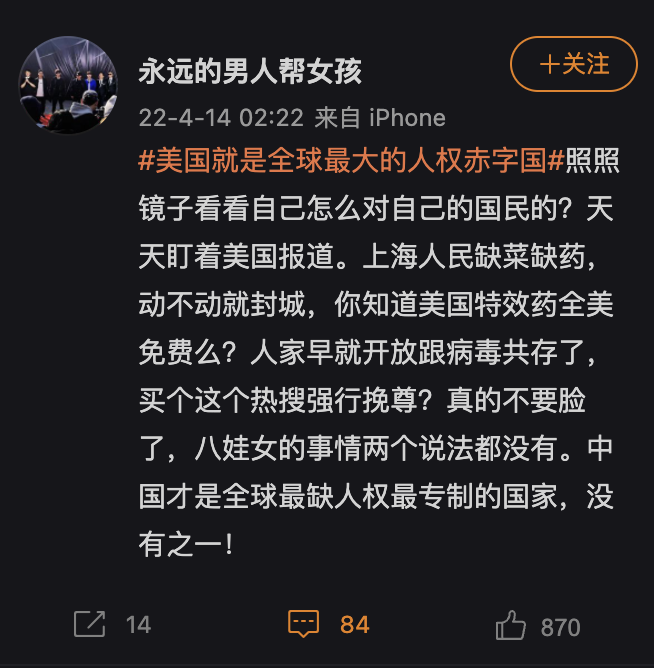 "Look at yourself in the mirror and see how you're treating the people. (You) keep starring at American news all day. People in Shanghai are lacking groceries and medicine. (You) simply lock down the city at the drop of a hat.

Do you know that the U.S. is giving out Covid anti-viral pills for free? They have already opened up and are living with the virus, and yet (you're) trying to buy this trending topic to forcefully salvage some of (your) pride?

Really shameless, you can't even provide an explanation for the chained woman incident. Actually, it's China that's the most autocratic country in the world that lacks human rights, no other country can surpass it!" 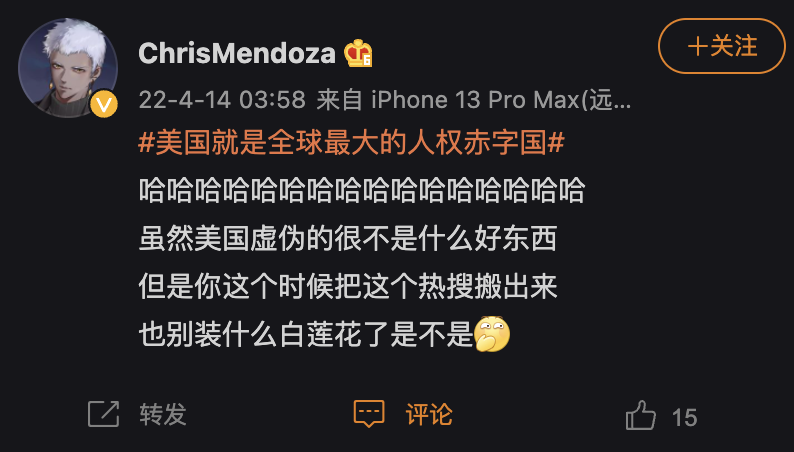 "Hahahaha. Although the U.S. is hypocritical and is no good either, you pushed this hot topic out at this particular time. So just stop pretending to be a saint now, okay?"

Many also mocked the state's policy of censoring what they perceived as unsavoury news that cast the government in a bad light. "Due to the author's settings, you are currently unable to view this post. This post goes against the relevant legal guidelines, and is no longer shareable now.

Apologies, this post has already been deleted by the author. This content is unable to be viewed right now. The author has customised the comments' settings. This video is no longer available, the user does not exist."

(Reply) “How similar is this to 2020, history always repeats itself. After the pandemic is over, the media will once again report on how the U.S. abuses human rights, and how great our country is."

"You'll be censored if you say the truth."

(Reply) "Three of my accounts have already been banned."

Another Weibo user said, "We could only watch on as the elderly and weak suffer as we can't help, we could only share their difficulties with others, call for help repeatedly, and voice our requests rationally, but we were all 404-ed."

"404" is an error code that shows up when a webpage is not available. It's used by social media users in China to say that their posts have been censored by the authorities.

Deaths that allegedly occurred due to lockdown measures

Someone also compiled various accounts of people allegedly dying due to lockdown measures, rather than the virus, such as the head of a security team who was found dead in his office due to suspected overwork.

There are also supposedly a number of elderly people who died alone in their homes as they likely didn't know how to get help, and no help was extended to them.

Several commented on the cost that China's "zero Covid" strategy had wrought, amid criticisms that the strategy had failed in containing the spread of Covid-19 cases in Shanghai, which now account for majority of the country's cases of community spread.

"They didn't die from the virus, but from these unreasonable policies."

"The price of zero Covid, sighs."

Several were in favour of China giving up on its "zero Covid" path as well, even though the government doesn't appear to be changing its course anytime soon.

"Seriously, if the Chinese are able to succeed in only having one case with severe symptoms and zero deaths among 100,000 people, then the country should reopen."

The outrage among the Chinese people appear to have spilled over from cyberspace, as seen from the following widely-circulated picture that appeared to capture a rare instance of a silent protest over the government's policies.

In what appeared to be a scene of people queuing up to get tested, a picture of Chinese foreign ministry's spokesperson Zhao Lijian was attached onto a man's back.

The caption on the picture roughly translates to, "To be in China during the pandemic, you should be secretly happy and count your lucky stars."

Zhao had directed these words to foreign journalists at a press conference in December last year, when one of them asked about China's response to criticisms towards the World Health Organization for its pandemic management, Global Times reported.

He added, "Any complaints or criticisms of China's handling of the pandemic will all turn into a farce in the end."