A candlelight vigil was held at Hong Lim Park on Apr. 25 for Malaysian drug traffickers Nagaenthran K. Dharmalingam and Datchinamurthy Kataiah, who are both scheduled to be hanged on Apr. 27 and Apr. 29, respectively.

Despite the rain in the evening, about 300 to 400 people attended the vigil, with some bringing along cardboard signs and placards calling for the abolition of the death penalty in Singapore.

At one point, a small scuffle broke out towards the end of the sombre event after a passer-by heckled one of the speakers at the vigil.

People show up with handmade signs

Groups of people were seen streaming into Hong Lim Park via an designated entry point at 7pm when the event started.

People who wished to enter the park had to get their NRICs checked to verify that they were Singapore citizens or permanent residents, as per the rules for participation in events at Hong Lim Park.

Posters and signs with messages of support for those sentenced to death in Singapore, and calls for the abolition of the death penalty, were put on display. 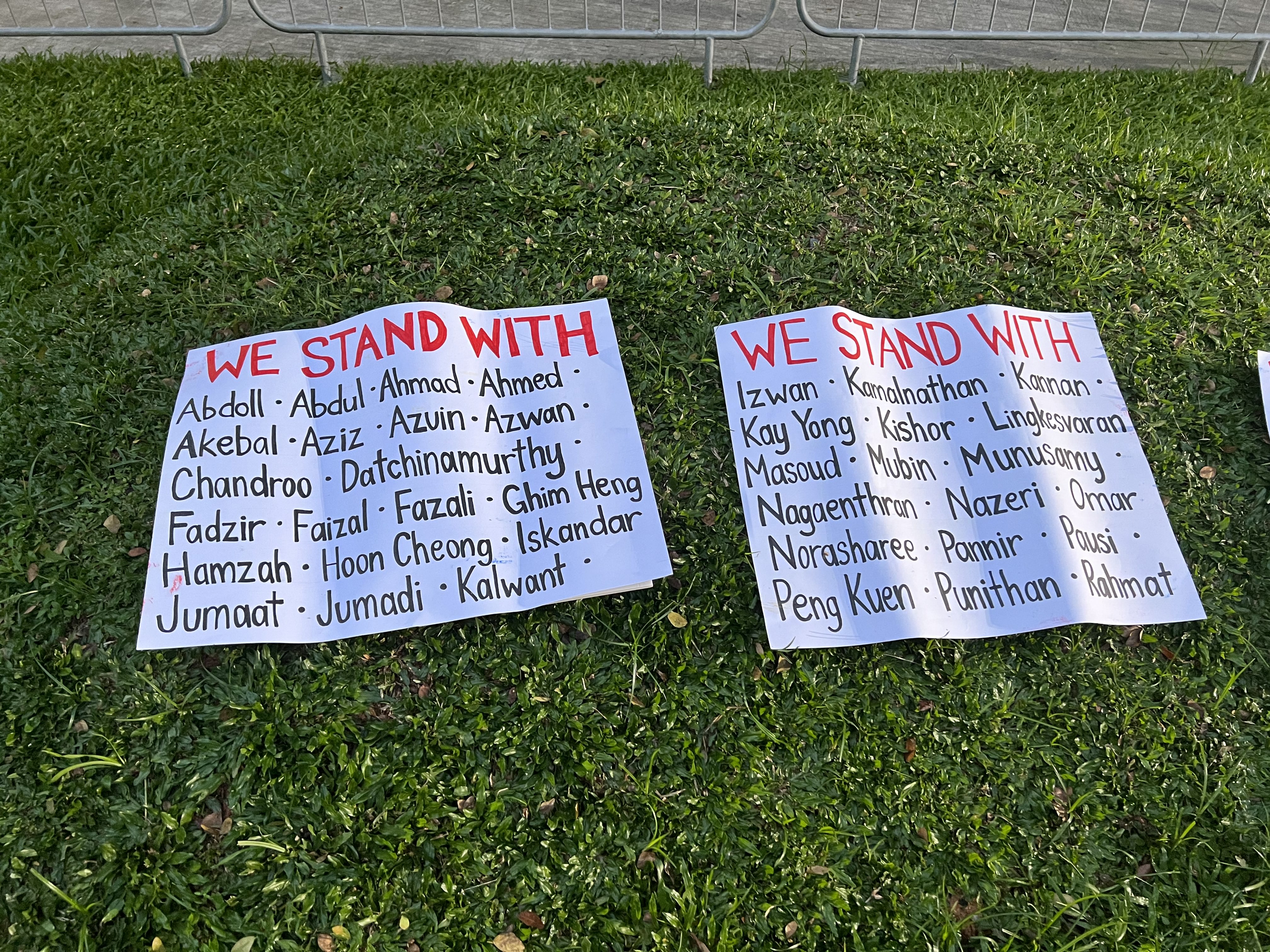 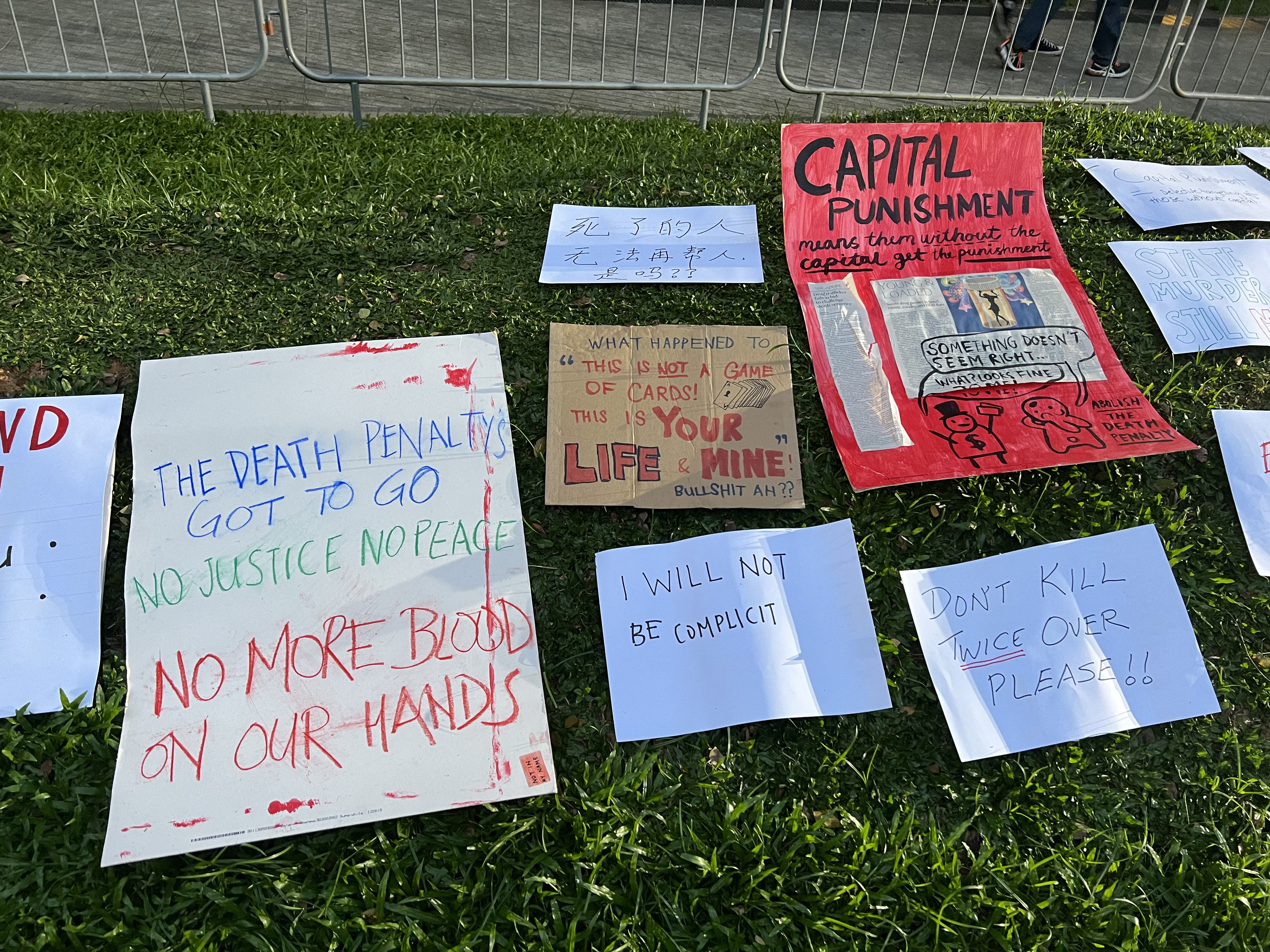 Attendees observed safe management measures as they were spread out across the park and displayed some of the handmade signs they had brought. 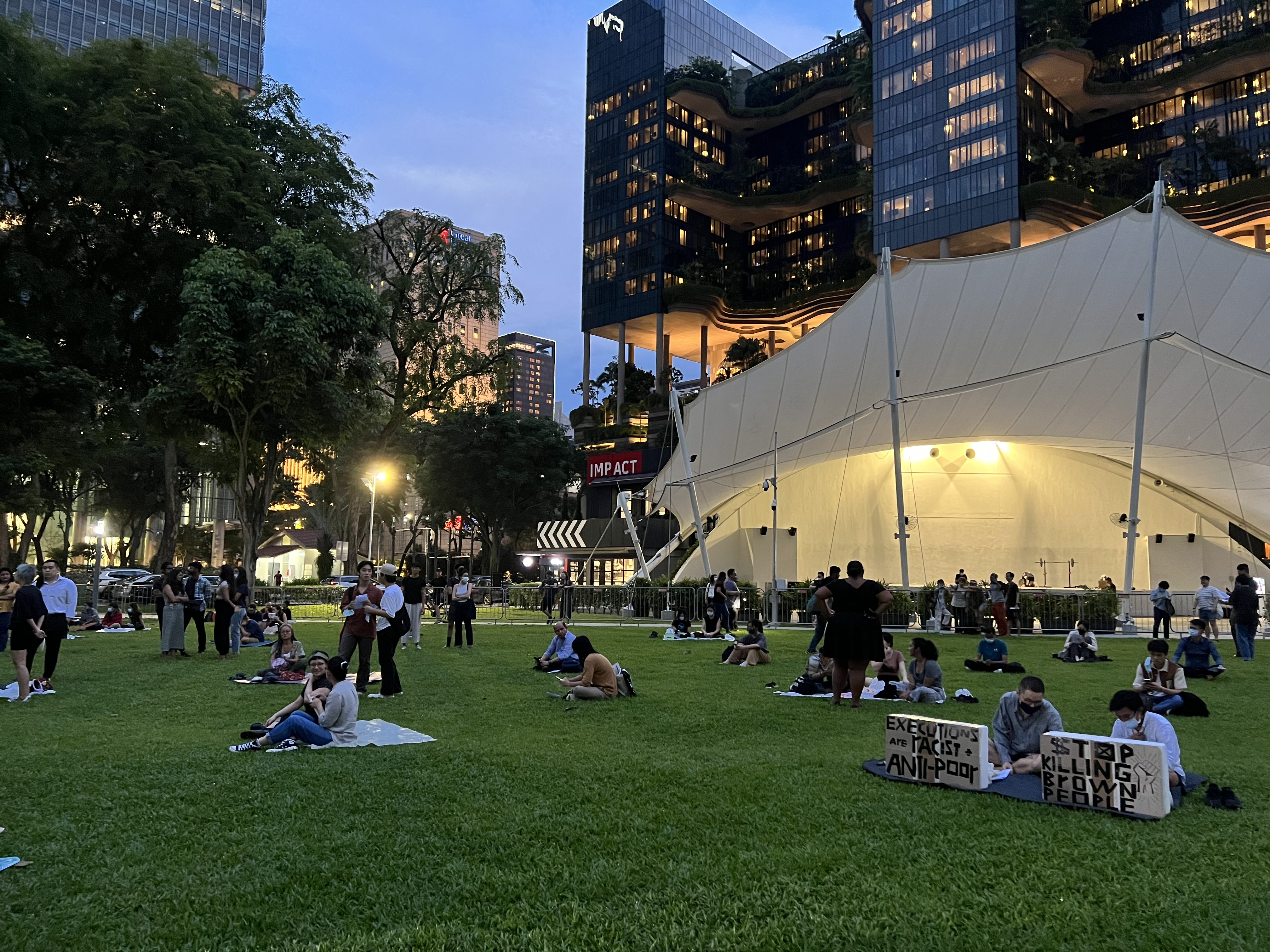 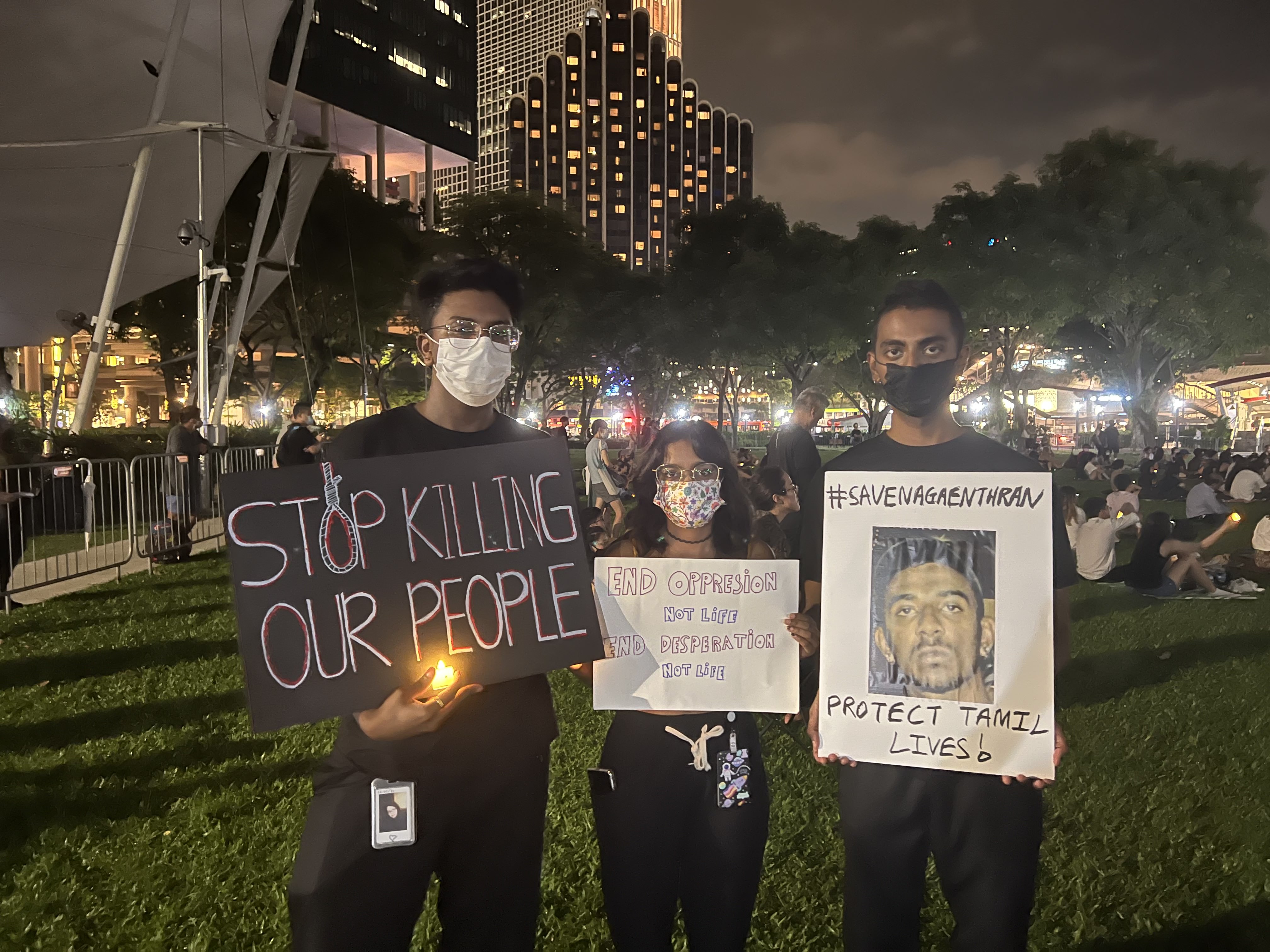 A sheet with chants and slogans were handed out to the attendees.

Electric candles were also given to participants as candles with open flames were not permitted within the park.

Rain did not faze crowd

Even as rain started to fall at around 8:45pm, those gathered at the park pulled out their umbrellas and stayed on. 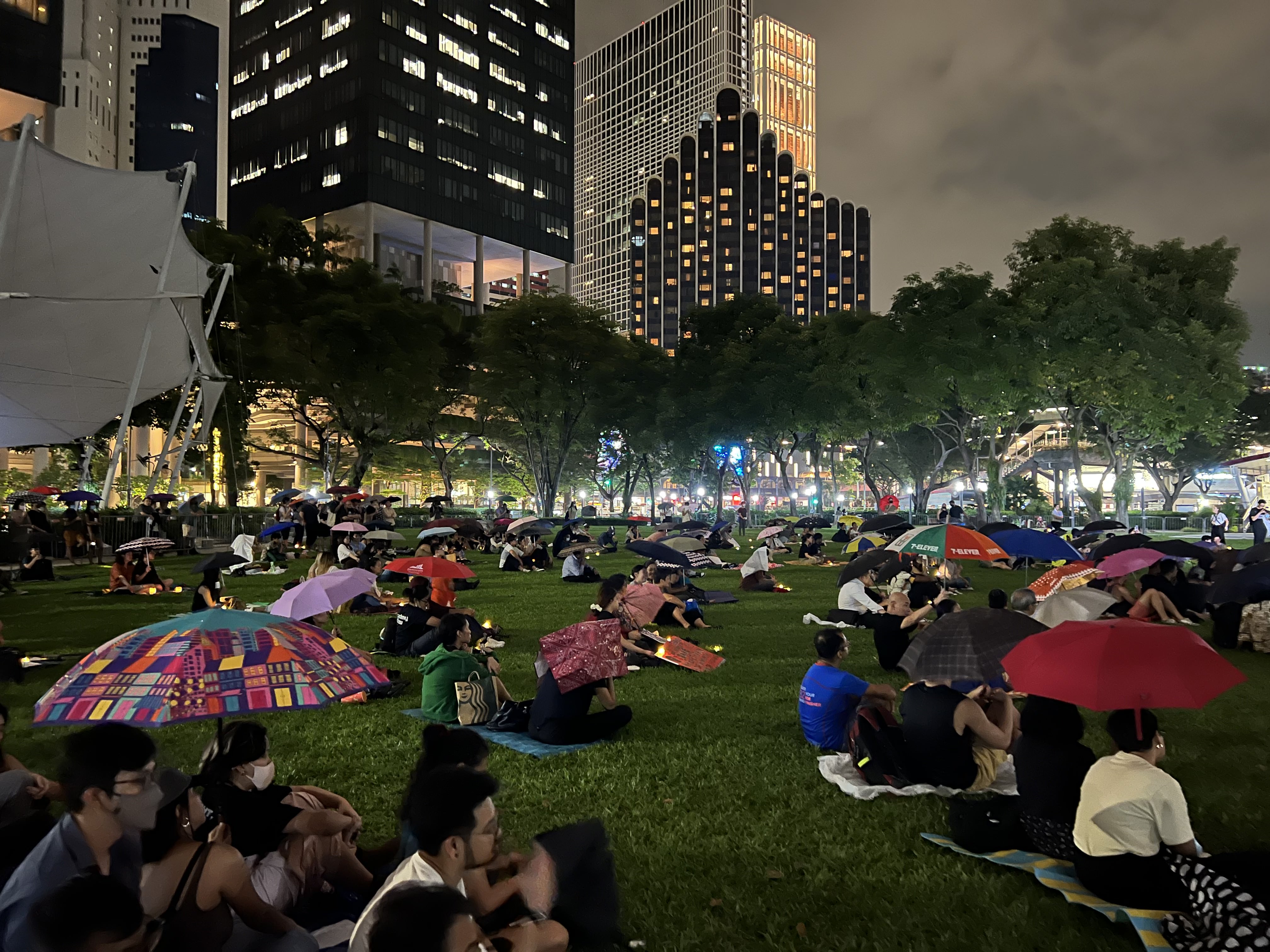 Local activists, such as Kokila Annamalai and Ariffin Sha, gave impassioned speeches at the event.

Kokila led a call and response with the people gathered:

Representatives from various religions were also present to give speeches and prayers, and a few musicians played to the crowd. 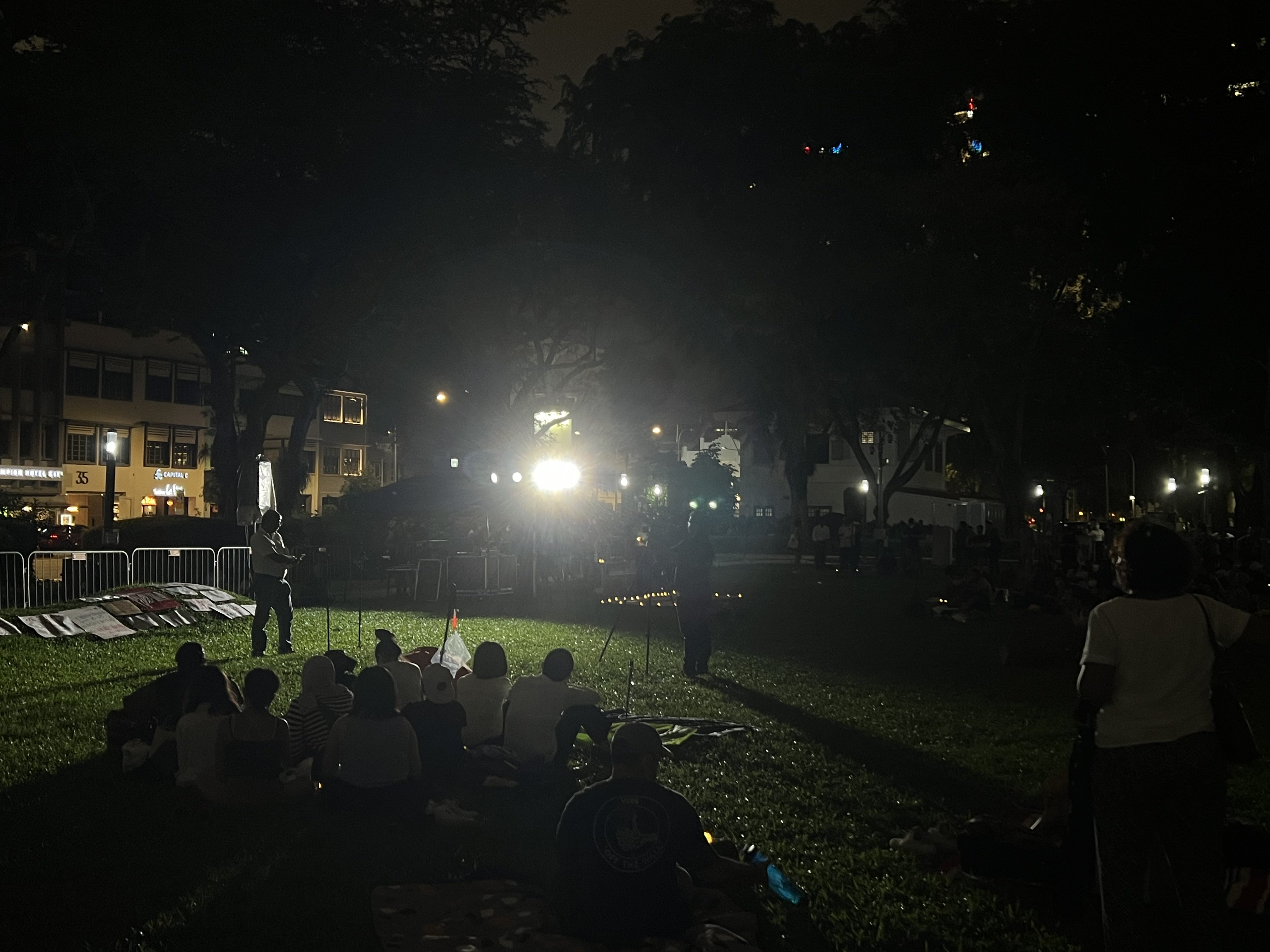 Participants at the vigil were asked to hold their candles up and hold hands with one another while observing a moment of silence. 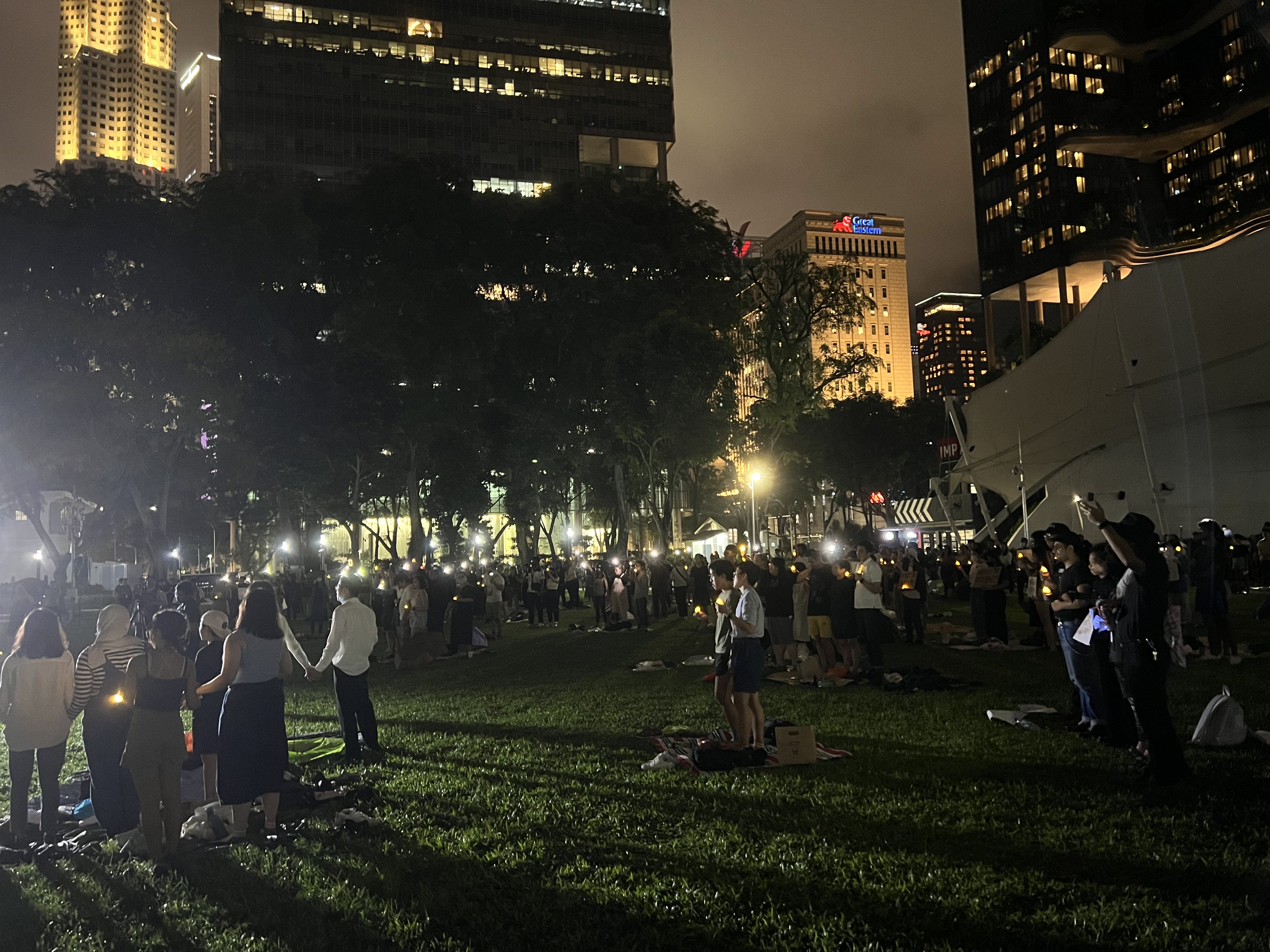 Towards the end of the event, a man standing outside the venue heckled a speaker who was giving a speech.

It was unclear what the heckler said.

Hearing this, a man in a leather jacket at the vigil ran up to the heckler, and shouted: "What the f**k did you just say?"

Another shouted for the heckler to "get lost".

Some of the vigil attendees jumped over the barricades to confront the man, and some forceful shoves between the heckler and the man in the leather jacket were exchanged. 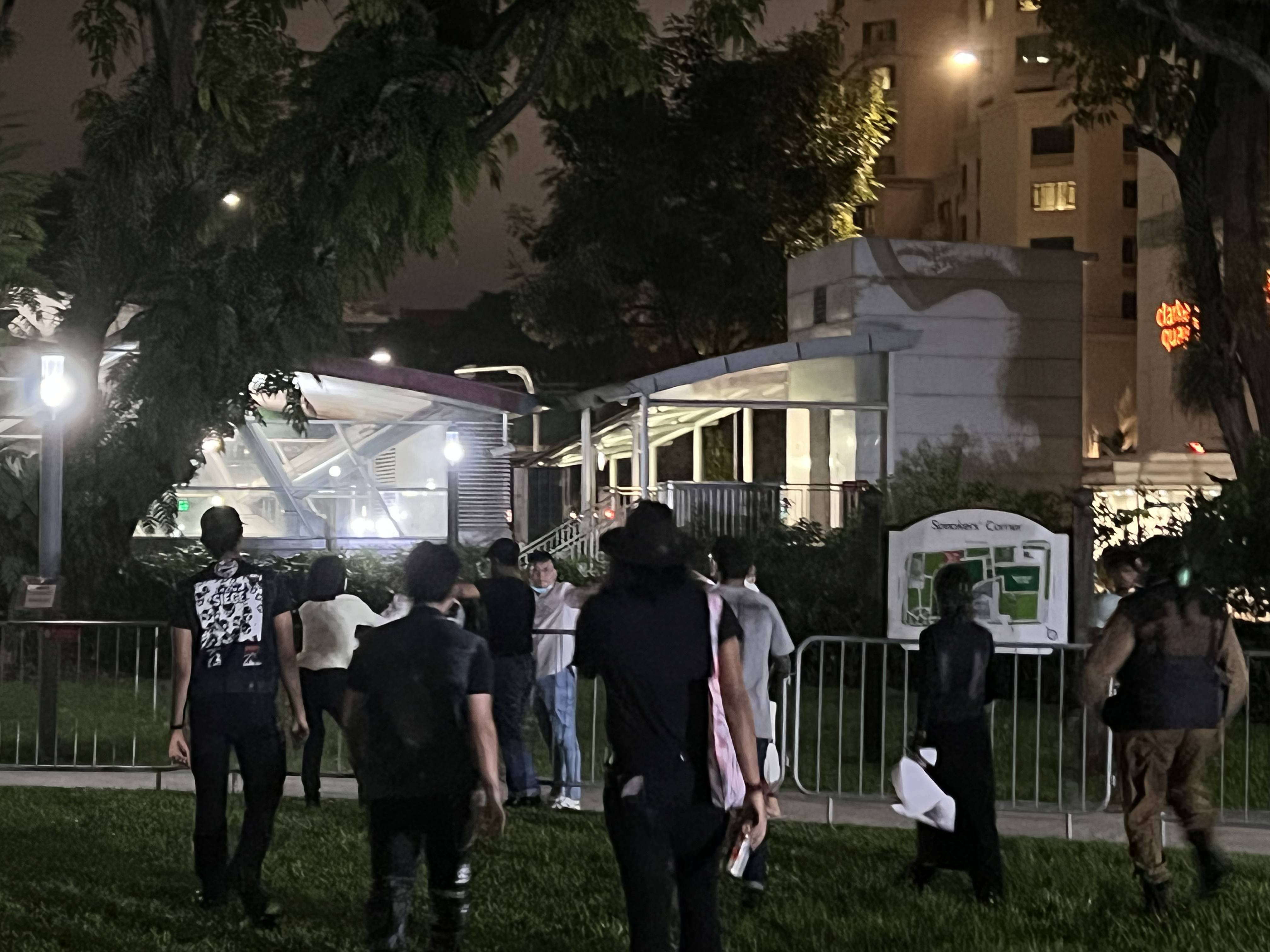 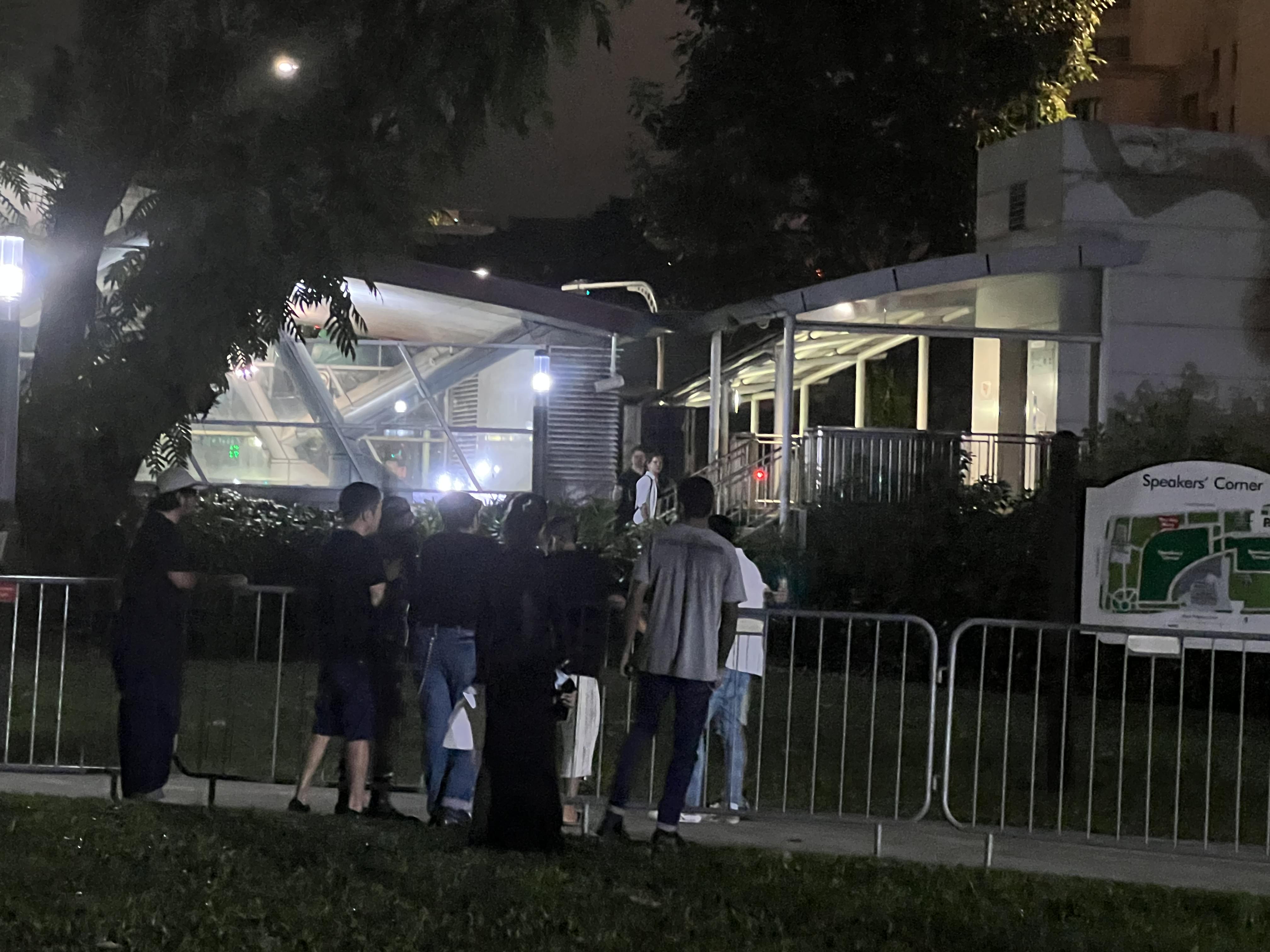 The scuffle was swiftly dissipated by other vigil attendees.

This vigil follows an anti-death penalty protest that was recently held on Apr. 3, 2022, when more than 400 people reportedly attended.

Activist and vigil organiser, Kirsten Han, estimated that approximately 400 people were in attendance for this latest Monday evening vigil.

An electronic crowd tracker at the entrance to the park also reflected similar numbers:

On the other hand, Reuters estimated the numbers to be about 300.

At the end of the event, participants were asked to sign and write messages of support on a banner. 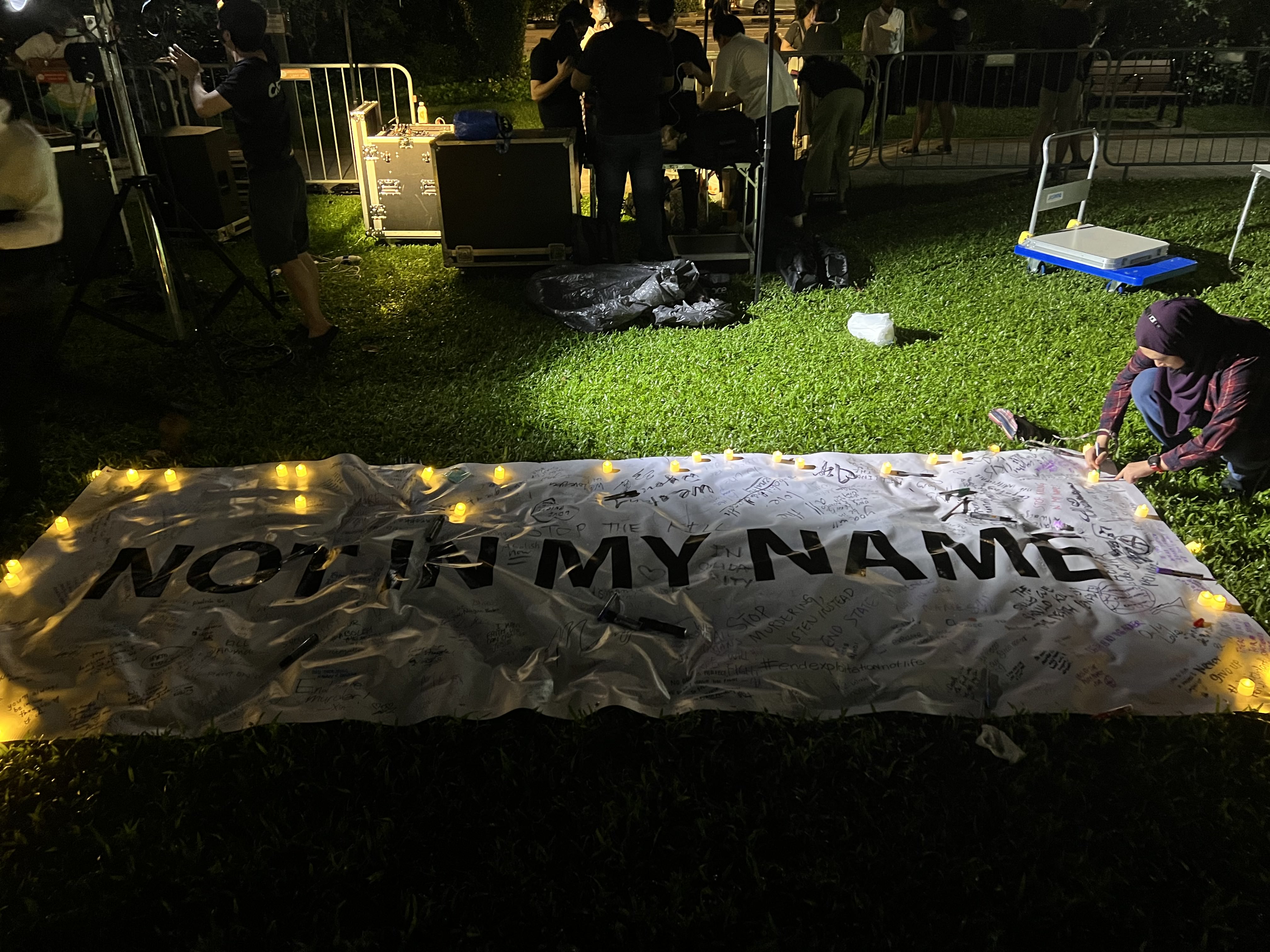 Nagaenthran and Datchinamurthy's families were present at the vigil, having travelled from Malaysia.

They remained outside of the barricades.

Under the terms and conditions for the use of Speakers' Corner at Hong Lim Park, which comes under the jurisdiction of NParks, only Singaporeans and permanent residents can take part in demonstrations held there.

Foreigners cannot participate unless they apply for a police permit to organise or assist in the organising of the event.

All photos by Low Jia Ying unless otherwise stated