A picture of a monitor lizard with a cable tie around its neck has been circulating around nature groups.

Facebook user Loke Peng Fai had taken the photo on the morning of Jan. 16 in Sungei Buloh Wetland Reserve, and only realised its predicament when they got home and looked through the images later that night.

Loke shared the image on the Facebook group "Singapore Wildlife Sightings", and said that the reptile disappeared into the water after the photo was taken.

The monitor lizard was photographed with a rather large fish in its mouth, and a black cable tie tight around its neck. Its eyes are closed, and a few flies had landed on its face. 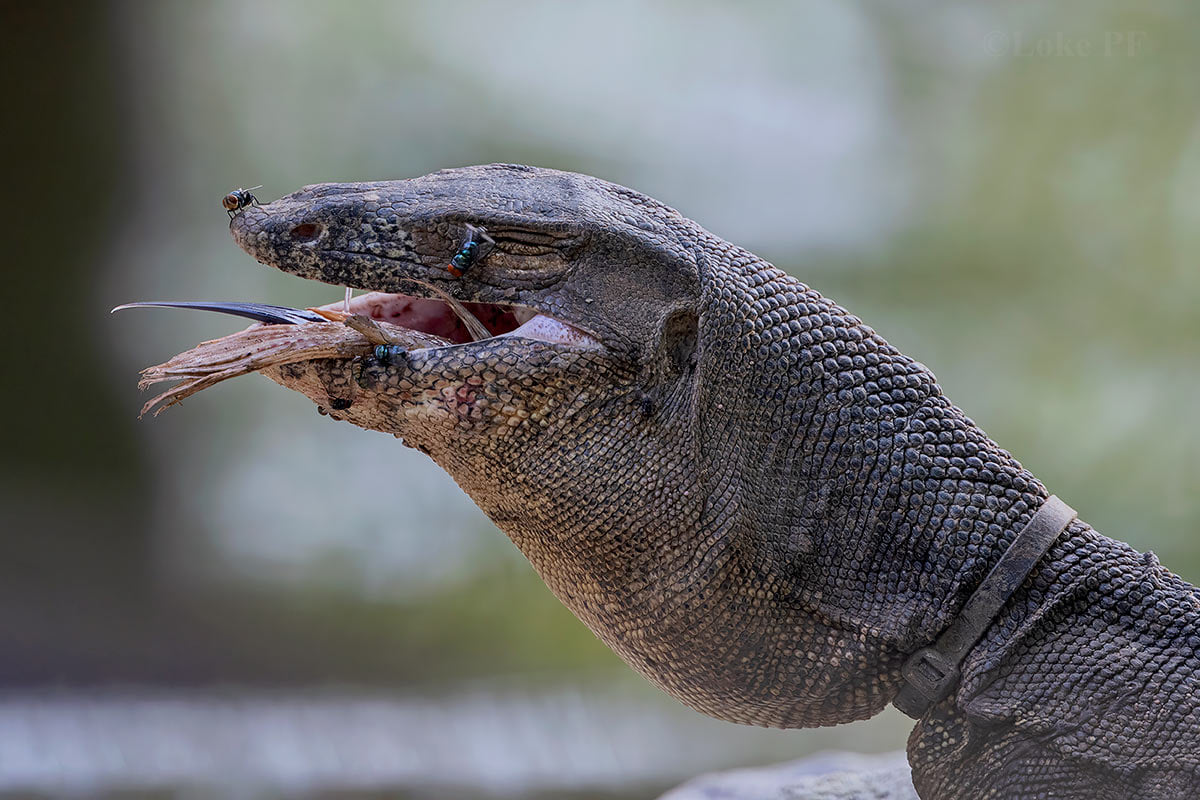 Bernard Seah, who has been a National Parks Board (NParks) volunteer for 10 years, alerted the Sungei Buloh NParks Team after he was tagged in Loke's post.

He told Mothership that the flies are not of concern, as they appear in swarms on a seasonal basis in Sungei Buloh.

He emphasised that while agencies like NParks and Acres have previously tried to intervene in such situations, catching animals like monitor lizards is no easy feat.

"All they need to do is run below a fence, or a low clearing structure, and humans cannot follow," he said.

The monitor lizard can still ingest scraps of food, which would give them enough energy to escape from humans.

A problem of litter

Seah told Mothership that this is the fourth monitor with plastic around its neck that he is aware of.

He had once came across a small monitor lizard with a distinctive blue plastic ring from a disposable water bottle around its neck.

The monitor lizard appeared to only be a few months old, and he added that it likely didn't survive without human intervention.

In the comments section of Loke's post, a few users also shared their experiences of encountering monitor lizards in similar situations.

Seah, who is also part of a working group for otters, said that they also receive reports of otters caught in litter once every few months.

He noted that while marine litter in coastal areas often do not originate from Singapore, "the bottom line is that we need to dispose of litter properly".

Members of the public should refrain from littering, and pick up litter if they see them to prevent such incidents in the future.

Seah thinks that the monitor lizard needs help as soon as possible, as its situation will soon turn dire.

"Looking at the size of the cable tie, I think this monitor lizard has reached a crucial stage. But I don't think it will die in the next few days," Seah told Mothership.

He also asked hikers to keep their eyes peeled for the reptile in a Facebook post on the group "Sungei Buloh Nature Park Network Flora & Fauna".

He advised group members to avoid speculating on how the cable tie was found around the monitor lizard's neck, but instead focus on helping it.

Members of the public can call NParks Animal Response Centre at 1800-4761600 if they spot this monitor lizard or any other animals that require assistance.

"It would be even more helpful if you can stick around to observe or track it (from the designated human path) until staff are activated and arrive on-site," he said.

He warned visitors not to step off the path at anytime, and make sure to check for other animals like bees, hornets, wasps, snakes and crocodiles.

In response to Mothership's enquiries, Group Director of Conservation Lim Liang Jim said that the agency is aware of the monitor lizard and advised visitors to green spaces to dispose of waste properly:

Littering not only spoils the beauty of our green spaces, they may also harm the animals.

Kindly dispose of your litter at the designated bins located around our parks and reserves.