Since Loh Kean Yew was crowned badminton world champion, it has been noticed by some that the 24-year-old did not receive any prize money for his historic win.

Five businesspeople subsequently came together to raise S$50,000 for the badminton player.

The endeavour was led by the managing director of Pine Garden's Cake, Wei Chan, who is himself an avid player and fan of the sport.

Chan decided to set up another donation fund via Ray of Hope on Jan. 2 to allow members of the public to contribute as well.

Chan approached the crowdfunding charity organisation to facilitate this after many members of the public approached him hoping to show their gratitude in a similar way.

The platform also ensures that all of the funds raised will go to Loh directly, a Ray of Hope spokesperson told Mothership.

The donation campaign has since raised S$67,323 as of the time of writing, including a particularly generous donation of S$50,000 from someone claiming to be a former national badminton player.

Some have also left Loh notes of encouragement. 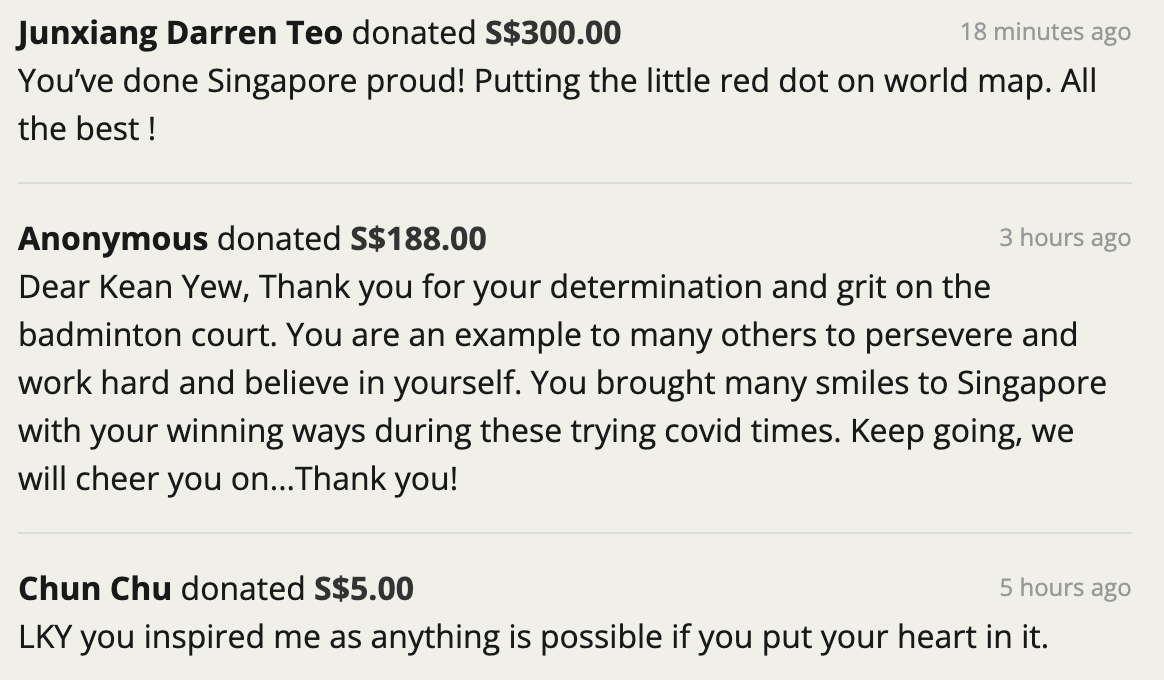 Chan shared that he was motivated to crowdfund for Loh because he saw several similarities between him and the badminton player.

He started playing badminton at a young age, and like Loh, would spar with his father at the front gate of his house.

He has also represented his schools and university in badminton.

As such, Chan said he has a clear understanding of the effort Loh put into the sport.

"Having gone through rigorous training of sorts, I know the amount of sheer hardwork, perseverance, tenacity and grit that is required for Loh Kean Yew to achieve what he did, love for the game aside."

He thus felt "compelled to do something to thank him for what he has achieved for himself and Singapore, and further encourage him towards his badminton hope and dreams".

Those who would like to contribute to Loh's Encouragement Fund can do so here.