Right after we published this story on smoked salmon trout masquerading as smoked salmon, a friend said to me: "You should check out what's going on with cod too."

I was intrigued, partly because my mother had, for some time now, been buying frozen fish on e-commerce platform Qoo10.

She loves the wide selection of fish available online as well as the convenience (as a value-added service, suppliers deliver your order in a cooler bag right to your doorstep. Some even throw in gifts). But above all, she loves buying "cod fish" from them. 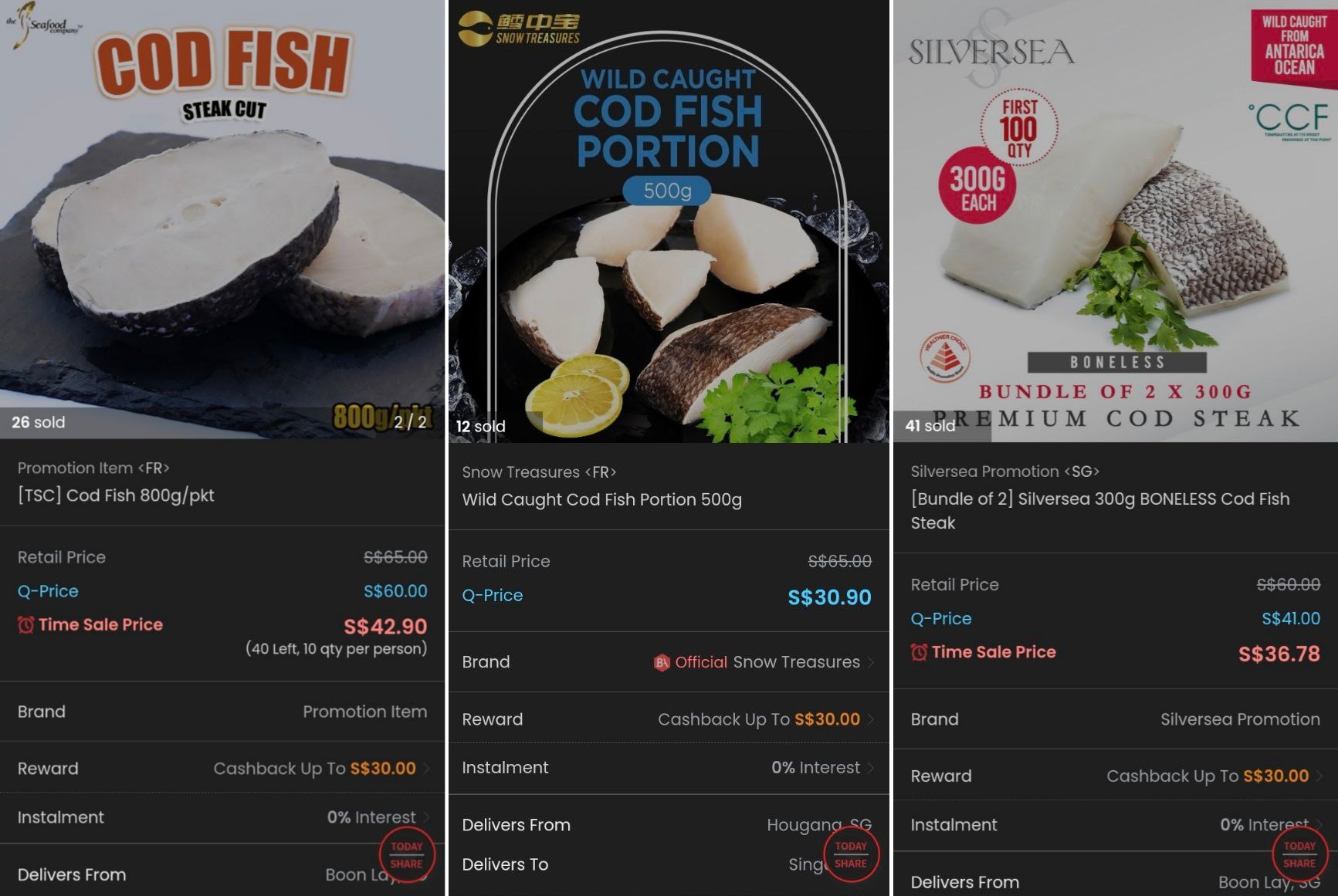 But the cod that my mother buys online doesn't taste or look like cod. It looks creamy white and tastes a lot oilier and juicier than cod. If it isn't cod, then what is it?

I went back to seafood supplier FISK to get some answers from senior sales executive Takashi Takeuchi.

According to Takeuchi, the term "cod" is used in Asia to refer to three very different types of fish:

I reached out to three suppliers of "cod fish" on Qoo10 — The Seafood Company, Snow Treasures, and Silversea.

The first two confirmed that they're selling Chilean Seabass. Silversea did not respond.

How do you tell them apart?

Well, it's quite easy to tell from the exterior.

The Atlantic Cod has a spotted exterior and a prominent line that runs through its middle.

The Sablefish has black skin with small scales. The Chilean Seabass also has dark skin but it is much lighter than the Sablefish.

Looking at the flesh, the Atlantic Cod has white flesh with pink streaks while both the Sablefish and Chilean Seabass have creamy white flesh. The latter two are also oilier to the touch.

Atlantic Cod is found predominantly in the North Atlantic, in areas like Norway, Russia, Iceland, Greenland, Canada, USA, Scotland, the Faroe Islands and the UK.

According to Takeuchi, about 1 million tonnes of Atlantic Cod are caught per year.

Compared to the other two, the Atlantic Cod has more bite and is a lot less oily. Conversely, it might be a bit dry to some consumers, especially if it is overcooked.

This is because its flesh has a fat content of about 2 to 3 per cent.

The Sablefish and Chilean Seabass — which according to Takeuchi are commonly known as 鳕鱼 (xuě yú) or Snow Cod in Singapore — have a fat content of about 20 per cent.

The higher fat content gives them an oilier, richer feel, which could explain why many consumers prefer the Sablefish and Chilean Seabass.

The Sablefish is a type of deep-sea, bottom-dwelling fish belonging to the Anoplopomatidae family. They are typically fished from the North Pacific Ocean, from places like Japan, Russia, Korea, Canada, and the U.S.A.

Its name is derived from its scales which feel almost velvety to the touch.

The Chilean Seabass is also sourced from the deep sea.

It is typically found in the Antarctic Ocean, fished from places like Argentina, Chile, Uruguay, Falkland Island, New Zealand, Australia, and South Africa.

The term "Chilean Seabass" is the product of a clever marketing campaign in the 1970s to sell an ugly, unknown species of fish known as the Patagonian Toothfish.

The campaign worked and demand for Patagonian Toothfish/Chilean Seabass shot up, to the point that the global population of the fish reached dangerously low levels.

Ok, so the 'cod fish' that I'm eating might be Chilean Seabass. So what?

Before we get there, here's another surprising bit of information that I learned from Takeuchi: The Chilean Seabass is the most expensive of the three.

Aside from the high demand for the Chilean Seabass' rich, fatty cuts, there's also the issue of supply. Chilean Seabass is caught in deep waters and require the use of specialised equipment and longliners.

In addition, Chilean Seabass is expensive because it has to be fished from sustainable sources.

You see, the Chilean Seabass today is considered overfished.

Environmental group Greenpeace has put the Chilean Seabass on its Red List and claims that our voracious demand for the fish will make it commercially extinct in five years. For those who are more environmentally conscious, this fish might not be so palatable.

For those who are not ready to give up the melt-in-your-mouth texture of Chilean Seabass just yet, there are sustainable fisheries that produce Chilean Seabass. These are certified by the Marine Stewardship Council (MSC), an independent environmental agency.

The MSC ensures that these fisheries are sustainable and not subject to overfishing or poaching (yes, illegal fishing of Chilean Seabass is rampant. Although there are laws in place to prevent poaching, they are difficult to implement).

Chilean Seabass that come from these certified fisheries are typically more expensive.

Local seafood suppliers like FISK and DishTheFish say their Chilean Seabass come from sustainable sources — and they can prove it with certificates.

Chilean Seabass should be eaten in moderation

Environmental concerns aside, there are also health concerns when it comes to eating Chilean Seabass.

According to the U.S. Food & Drug Administration (FDA), Chilean Seabass has a mean mercury concentration of 0.354 ppm. Sablefish has about the same level of mercury — 0.361 ppm. Cod has 0.111 ppm.

0.354 ppm of mercury is not a dangerous level — there are fish with much higher levels of mercury, like sharks (0.979 ppm), swordfish (0.995 ppm), and king mackerel which is known as batang locally (0.73 ppm) — but it is enough to warrant an FDA advisory for pregnant and breastfeeding women to eat only one serving of Chilean Seabass a week.

Mercury is a naturally-occurring contaminant and long-term exposure to it can lead to brain and heart problems, especially for at-risk segments of the population like pregnant women, breastfeeding women, and young children.

This might be concerning because locally, Chilean Seabass — or 鳕鱼 (xuě yú) — is often touted as a good fish for new mothers who are on confinement.

Two new mothers I spoke to said that they were advised to eat Chilean Seabass because it is supposedly good for recovery and more importantly, good for the production of breast milk.

Both said that because of this, they have been eating Chilean Seabass about twice a week.

The problem of mislabelled fish

One root cause of these issues may be the fact that fish in Singapore can be mislabelled.

Takeuchi concurred, saying that "there is room for mislabeling where the aim is to sell a cheap fish for a higher price — or maybe [suppliers] don’t know better themselves".

It must be said, though, that this is a global issue and not specific to Singapore.

Earlier this year, The Guardian reported that 36 per cent of seafood products sampled from 30 countries were mislabelled. Supply chains in the seafood industry are complex and opaque, hence making it "relatively easy and profitable" to mislabel fish.

If you read our previous article on suppliers marketing smoked salmon trout as smoked salmon, you'll know that the Singapore Food Agency (SFA) does not require suppliers to declare the type of fish used in fish products because it is not a food safety concern.

Instead, the food agency says that it is up to the industry to make sure that food labels are accurate and can be substantiated.

But what about Chilean Seabass with its moderate amounts of mercury? Isn't it a food safety issue?

When contacted, the SFA said that when it comes to food safety, it adopts a risk-based approach that is guided by a science-based risk assessment and management approach that is consistent with international standards.

"SFA has in place an integrated system to ensure that both imported and locally produced food is safe for consumption. Food products such as seafood can be imported from a wide range of sources, but are subjected to post-import inspection and sample testing based on our risk assessment. Samples are tested for a wide range of food-borne hazards such as chemical contaminants (e.g. heavy metals, drug residues, food additives) and microorganisms (e.g. harmful bacteria like E. coli, Salmonella, Listeria)."

Specifically, Chilean Seabass that are found to contain mercury levels exceeding regulatory limits are not allowed to be imported, manufactured or sold in Singapore, said SFA.

In the case of seafood, the SFA has this consumer advisory:

Well, there you have it. Next time you're shopping for "cod fish", make sure you know what you're getting because it can have an impact on your health and the sustainability of the fish you're eating.