It seems like the smoked salmon you're getting at the supermarket might not be salmon at all.

Some time back, Ivan, a reader who shopped regularly at Giant, Cold Storage, and NTUC FairPrice, wrote to us with this tip:

"One item that is sold in the smoked fish section is ‘salmon trout’. It is marketed as smoked salmon but the ingredients will list it as salmon trout. It is cheaper than smoked salmon."

But that's not all. According to this aggrieved reader, there's no such thing as "salmon trout".

"Salmon is salmon and trout is trout. There is no salmon trout," was his terse response. 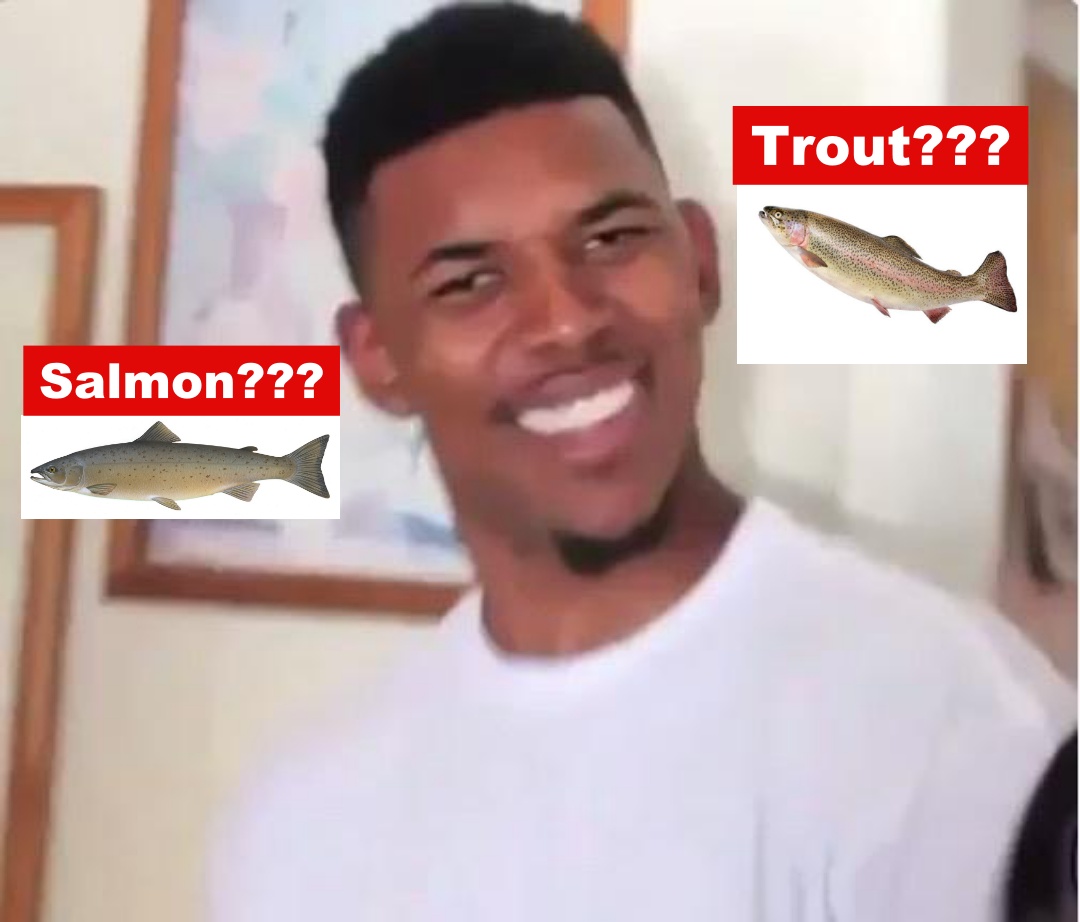 "It is false advertising," he said, surmising that retailers do this because salmon sells better than trout.

Of course, I was intrigued.

I headed to a few supermarkets to take a look for myself and sure enough, found these packs of smoked salmon trout masquerading as smoked salmon: 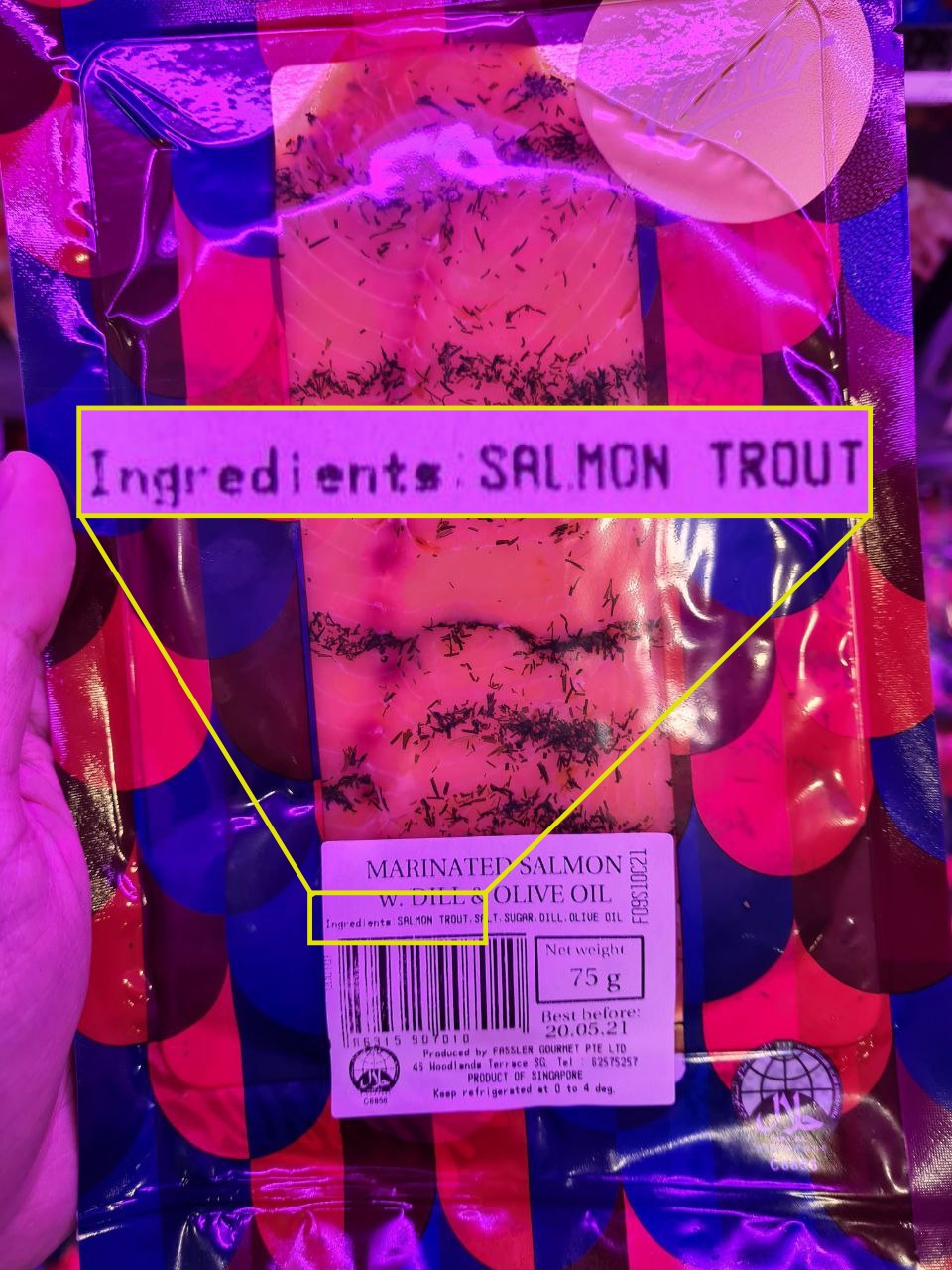 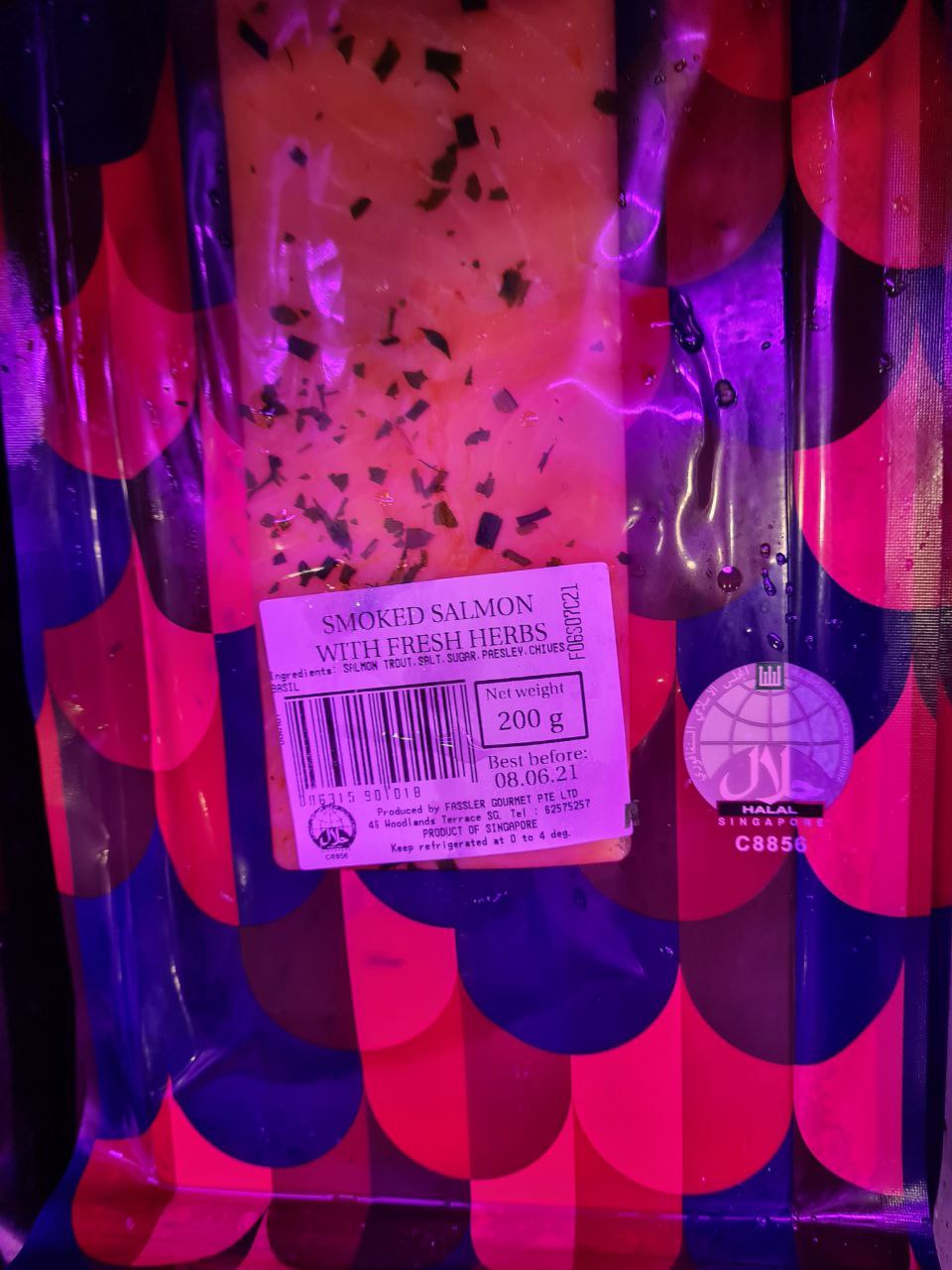 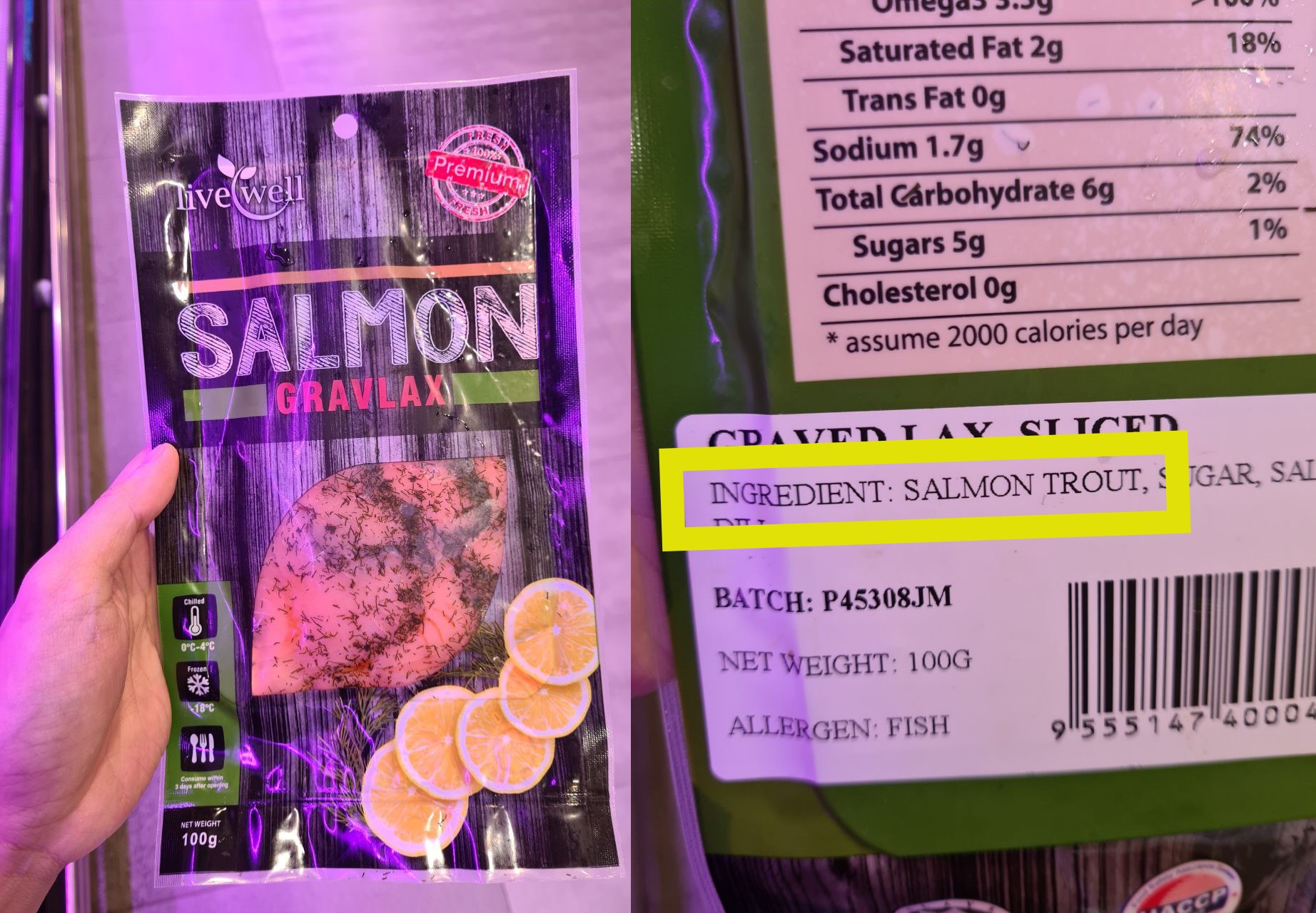 A quick Google search yielded this 2018 report which basically confirmed that "there is no such thing as salmon-trout", attributing it to a case of "acute mislabelling".

Cool, but do you know what else we found on the internet when we searched for "salmon trout"? 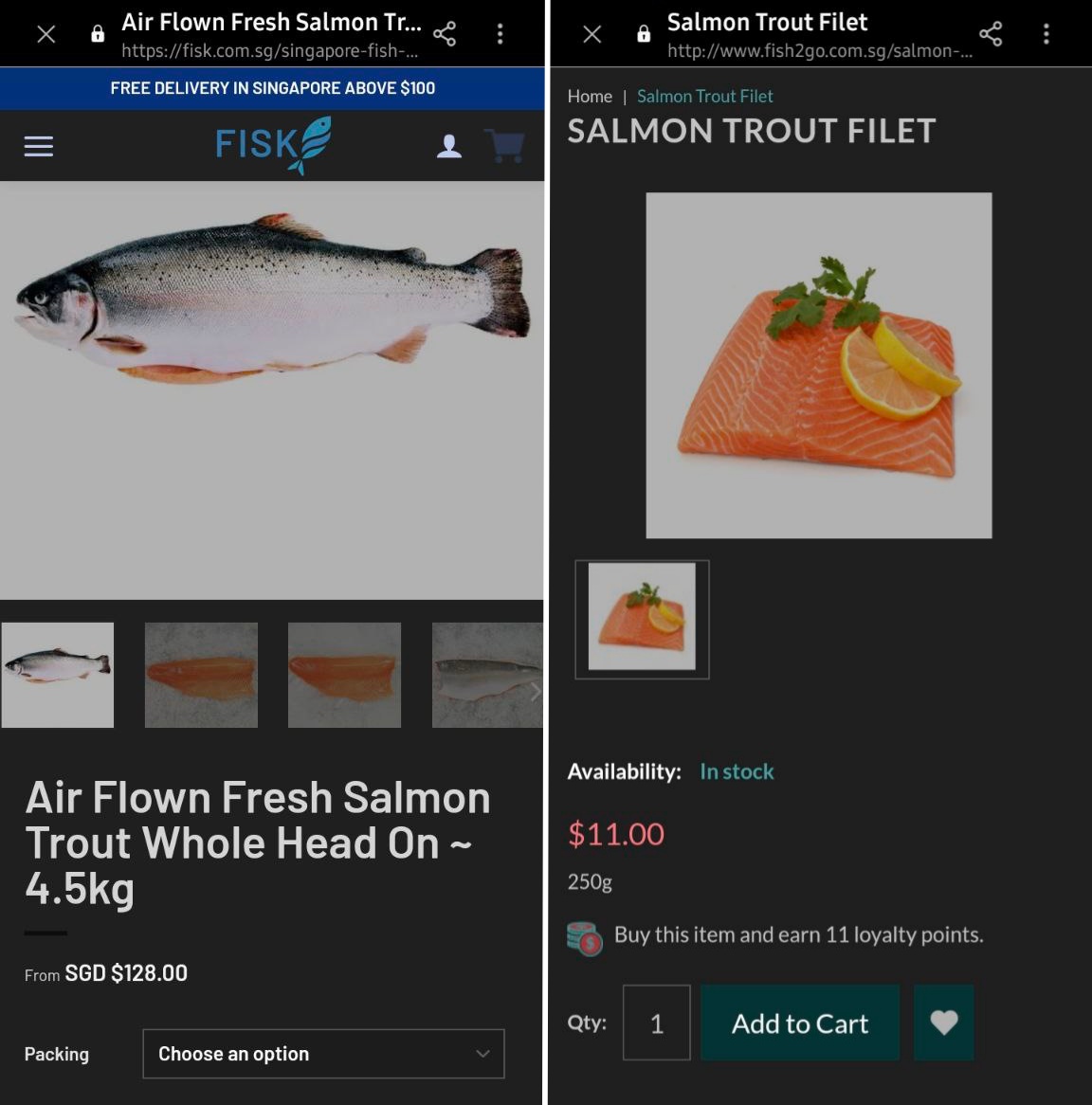 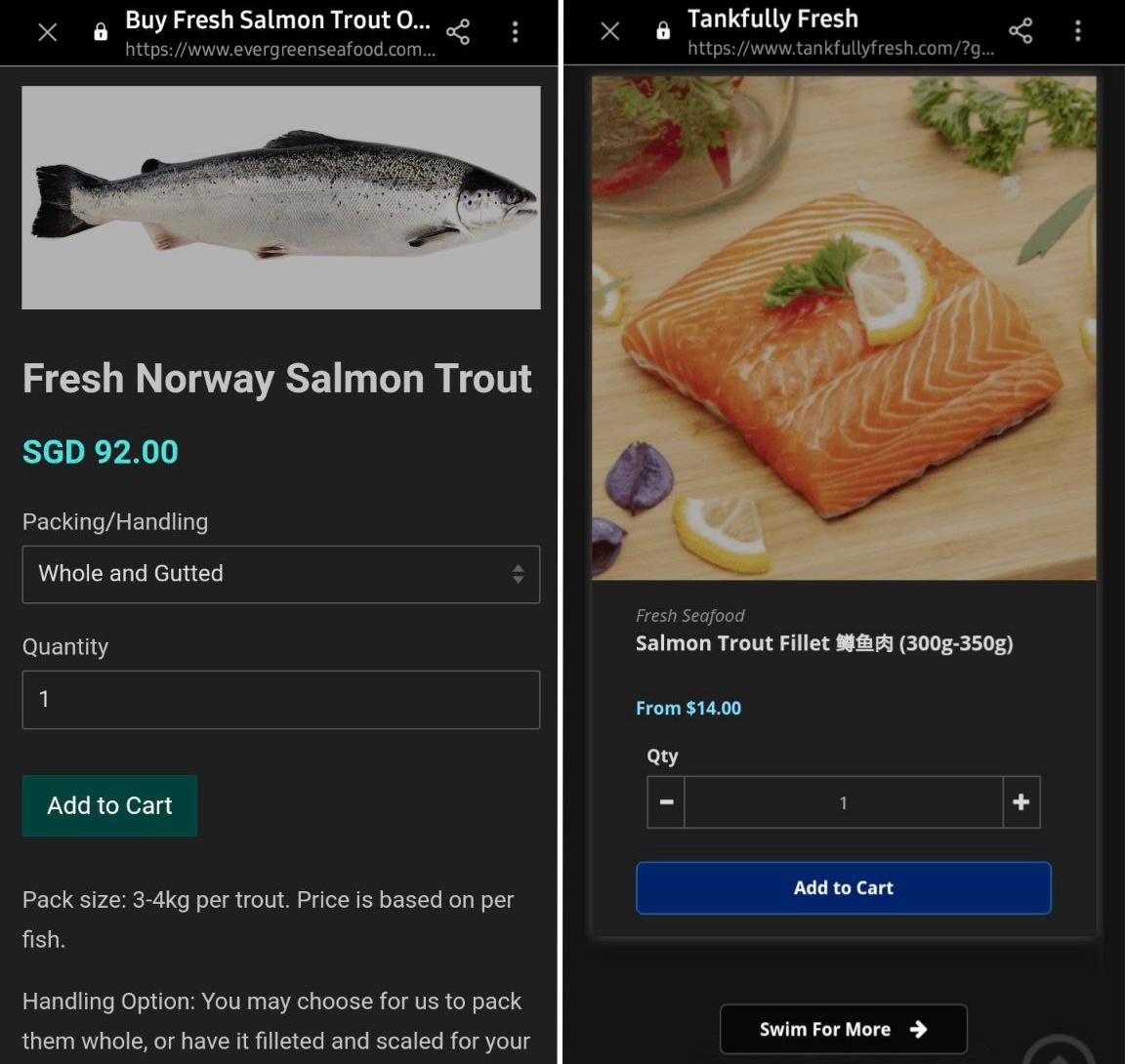 The mystery deepens: Is salmon trout a real fish?

If it is, is it considered salmon? If it isn't salmon, then what is it?

Will choosing to serve smoked salmon trout over its more conventional cousin diminish the lustre of my bougie home party?

The folks at the Singapore Food Agency entertained my questions about salmon trout with this rather interesting piece of trivia:

OK, so they come from the same family, but they aren't the same, according to a couple of seafood suppliers whom I spoke to.

The first was Fisk which is headquartered in the far reaches of Fishery Port Road.

There I met senior sales executive Takashi Takeuchi, a very stout and earnest Japanese man, who gave me a quick refresher course on Norwegian fish as well as this revelation: Salmon trout has a proper name. Fjord trout.

40 years ago, the seafood industry labelled the fish "salmon trout" in order to differentiate it from its cousin the river trout, said Takeuchi.

However, over the last decade or so, the confusion between salmon and salmon trout resulted in the industry giving it a new name: Fjord trout.

And while it is quite similar to salmon, salmon trout (or rather, fjord trout) "is not exactly salmon", said Takeuchi, explaining that while both have the same nutritional value and can be eaten raw, they differ in look and size.

There's a difference in taste as well, according to Kogu, the boss of Fish2Go, another local seafood supplier who sells fresh salmon trout fillets online:

"Taste wise, salmon has a strong oily fishy taste. But on the other hand, trout does not have the fishy taste and people who don’t like salmon tend to go for trout."

While salmon trout can come from a variety of countries like Chile, Australia, U.S., Canada, and Scotland, both suppliers said that most salmon and salmon trout come from Norway.

Norway and Chile, in particular, supply 80 per cent of the salmon trout that the world consumes, said Takeuchi.

Salmon trout costs about 10 per cent to 20 per cent higher than salmon, he said:

"This is due to the economies of scale. Salmon has 10 times more production than salmon trout. Salmon trout takes a longer time to grow than a salmon thus they eat more and this impacts the cost."

Salmon trout has been in the Singapore market for a few decades now and there is a demand for it, according to both suppliers.

Fisk has been importing it through its parent company Snorre Food for 34 years, selling "hundreds of tonnes of salmon and salmon trout per year".

Fish2Go, on the other hand, has been selling salmon trout since 2006 and according to Kogu, it's quite well-received by his customers. However, he declined to review the amount of salmon trout he sells ("It’s a trade secret. Lol.").

Distributor: "We are not trying to mislead our customers"

OK, so thanks to Takeuchi and Kogu, we now know that salmon trout is not salmon. However, that still left us with Ivan's original gripe: Smoked salmon trout being passed off as smoked salmon in our supermarkets.

I wrote to Fassler Gourmet, pointing out that their Marinated Salmon (actually salmon trout) with Dill and Olive Oil is kinda mislabelled.

Unfortunately, I did not get a response from them.

Thankfully, Champ Fungi, the distributor of a particular brand of smoked-salmon-that-is-not-salmon, responded to my email:

"We are not trying to mislead our customers nor deliver something inferior," came the reply from a sales manager, who included a link to this article.

"(Salmon) trout is well known for its firmer taste than salmon besides having a better colour and flavour. In gourmet markets like Malaysia and Japan where they really appreciate their fish, trout is much preferred in these countries.

As a matter of fact that trout is also costing more than salmon and is considered premium."

Well yes, but customers who purchase this particular brand of smoked salmon might not be too happy to know that they're getting a different fish, regardless of whether it is more premium or not, I replied.

To this, the sales manager pointed out that the ingredients are "clearly stated in the label, so the customers can check the labels before buying them".

SFA: No requirement to declare type of fish for pre-packed food

If you're thinking that perhaps a mislabelled pack of smoked fish runs afoul of food regulations, you are wrong.

"Fish, or fish product ingredients, can be declared using the generic term 'fish'. There is no requirement to declare the type of fish used as this is not a food safety concern."

The Singapore Food Agency also said that the industry must be responsible for ensuring that any food labelling claim made is accurate and can be substantiated.

It also advised that consumers should check the ingredient listing to ascertain the contents of the product before purchase.

Well, there you have it. The next time you're shopping for smoked salmon, best to make sure you're really getting what you think you're getting.

Top images by Joshua Lee. Special thanks to reader Ivan for his tip!