A Singaporean woman has paid over S$80,000 for nail care services at Nail Palace since 2019, supposedly due to the business' hard-selling tactics and overpriced packages.

Opened in 2002, Nail Palace is a nail salon chain with 26 outlets, many of them in heartland malls like Jurong Point, AMK Hub, and Northpoint City.

The woman's son, Loh, wrote to Mothership after discovering that his 67-year-old mother had racked up over S$80,000 in credit card charges since 2019 at the Nail Palace.

"When I asked her how she thought she could realistically afford the high prices charged by Nail Palace, she told me that the employees in the store would not allow her to leave if she did not sign on to a package," said Loh.

When Loh's mother said that she did not have the means to afford this, the staff would explain that their services are affordable when the charges are paid over 12 monthly credit card instalments.

"They would also call her multiple times to harass her and ask her to return to the store," he said.

Even when the nail salon was closed for the majority of the 2020, Loh said his mother was pressured into purchasing more packages.

Loh told Mothership that his mother, who works in the finance sector, visited Nail Palace about once every three to four weeks before and during the pandemic.

As Nail Palace is well-established in Singapore, with numerous chains in the heartlands, Loh said she believed that they were trustworthy and did not suspect anything.

His mother has been struggling to pay her credit card bills due to difficulties in maintaining her income during the pandemic, and had also recently suffered a stroke.

"She is feeling lost and perplexed about why she is made to accumulate credit card debt for nail services, and is looking for a way to end this vicious cycle," said Loh.

Loh also uncovered a receipt that showed that the nail salon had charged his mother over S$11,000 during a single visit.

Nail Palace also provided a breakdown of the costs on the receipt to Mothership.

Checking the prices of other nail salons, Loh said he found the prices at Nail Palace "far too exorbitant and a rip off".

"I was shocked that a nail salon located in the heartlands would try to cheat my mother of her money by hard-selling her a ridiculous number of overpriced nail packages over the course of the last three years," he told Mothership.

Loh plans to lodge a police report and has raised the matter to the Consumers Association of Singapore (CASE).

In response to Mothership's queries, Nail Palace provided a statement on the matter.

Nail Palace said Loh's mother is a VIP and a regular who frequents Nail Palace at least once a month.

The business stated that it does not harass its customers, but give priority to VIP customers to make appointments to utilise services in their packages.

Nail Palace said: "Due to this pandemic, our schedules for the services in the outlets are very tight and we are very short on manpower, hence, we will call all our VIP customers to make sure that they are scheduled an appointment slot so as to prevent any complaints or disappointments."

In response to the claim that Loh's mother was not allowed to leave the store without signing a package, Nail Palace said:

I believe that there might be some misunderstanding. Our shops are quite small so we are not able to accommodate so many customers in a shop. If all customers visit our store (and) don't leave without signing up any package with us, we would definitely have no space to accommodate and service our existing 600,000+ members.

In addition, safe distancing is being implemented and it is also our company's responsibility to follow the law, therefore, we need to allocate time-space for every customer to have their services so, in fact, they might not be able to stay too long in an outlet.

Nail Palace also said Loh's mother has been patronising the establishment for two years, and that "she definitely likes [its] services and products".

"And throughout this period, she had never filed any official complaints or requested any refunds," Nail Palace added.

Regarding the prices at the salon, Nail Palace said the amount is not for just the products themselves.

"They are multiple sessions of services we provide together with the use of the products," Nail Palace said, "as from our records, they are all a minimum of eight to 10 spa/ treatment sessions."

"Please do not misunderstand them as just a simple bottle of nail mask or moisturising cream," Nail Palace added.

A quick look online reveals that Loh's mother's experience is far from a one-off incident.

Many users on the online forum Complaints Board have shared similar experiences of hard-selling and being sold overpriced packages.

One user had stepped into Nail Palace for a simple service, but left with a package that amounted to over S$8,000.

One customer was also pushed to purchase more packages, and left the nail salon after forking out over S$10,000.

Another said the dermal fungus treatment she was recommended was "daylight robbery", and the packages the staff were "hard-selling" started at S$20,000. 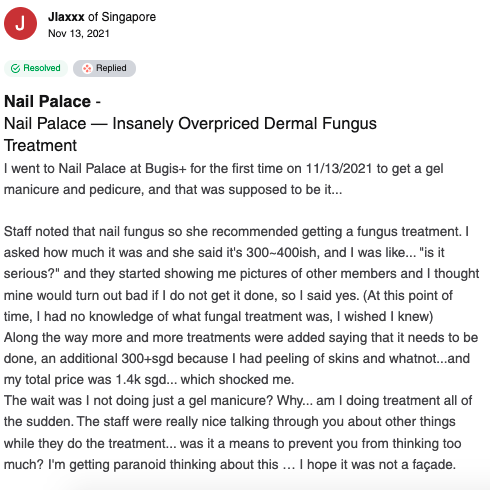 Regarding the online complaints, Nail Palace said "it cannot be helped", and complaints aside, they receive many good reviews from their customers.

CASE received 408 complaints about pressure selling in the beauty industry in 2020.

In 2019, Nail Palace was one of several beauty businesses that were sent warning letters by CASE due to complaints of pressure sales levelled against them.

CASE had also invited Nail Palace to enter into a Voluntary Compliance Agreement (VCA) as provided for under the Consumer Protection (Fair Trading) Act (CPFTA) to cease its unfair practices and to compensate affected consumers.

However, Nail Palace declined to enter into the VCA, and CASE noted in 2019 that they continued to receive such complaints against Nail Palace.

Errant suppliers who persist in unfair practices will subsequently be referred to the Competition and Consumer Commission of Singapore (CCCS) for investigation.

CASE advises consumers to exercise their right and walk away from a dubious deal with unclear terms or aggressive pressure sales tactics.

Consumers should also refrain from making any financial commitments if they feel overwhelmed, uneasy or intimidated during the sales pitch.

They should be wary of “special discount” or “one-time only” offers, as staff may take the opportunity to push packages and leave little time for consideration.

If you are barred from leaving, you can consider bringing a friend or family member along and/ or call the police.