Over the past two weeks, Singapore's Parliament has published five special reports and more than 34 hours of footage from the ongoing Committee of Privileges (COP) hearings.

If you're a regular follower of Singapore's Parliamentary proceedings, those numbers might not faze you one bit.

After all, Parliament hearings just for a single day have stretched for as long as 10 hours, sometimes running past midnight.

All Parliament sessions have been live-streamed since Jan. 4, 2021, in the name of "transparency, accountability, and accessibility".

But the recent COP hearings are not ordinary sessions of Parliament, and received different treatment.

While Parliamentary debates are transcribed and made available to the public via the Hansard, transcripts of the COP hearings were not published. Instead, the COP made special reports summarising what was said, and capturing the minutes of the COP's meetings.

Instead of live-streaming, Parliament published video recordings of the COP hearings in full, some time after the hearings.

A number of videos from gov.sg were identified to be "Trending" on YouTube in Singapore, after the first batch of videos were released.

Method and timing of COP materials' release decided by COP itself

But who determines what the COP should publish, and when?

These appear to be issues that were decided by the COP itself.

In fact, after the release of the first special report and first set of videos on Dec. 3, the Office of the Clerk of Parliament issued a statement about the issuance of reports.

The statement cited the Standing Orders of Parliament, and saying:

"Under Standing Order 105(2), the Committee may, at any time during its proceedings, make a Special Report to Parliament on any matter which it may think fit to bring to the notice of Parliament. This keeps Parliament informed of the progress of its investigations in a timely manner when appropriate."

The statement was issued after some — including the Workers' Party itself — highlighted that the first report had been issued without first taking evidence from WP leaders, even though it contained "serious allegations".

How else could it have been done?

The COP could have justified a different method and timing of publishing its materials.

For example, it could have delayed the public release of its various special reports, and the footage of the hearings, to a later date — perhaps after it had completed its fact-finding.

To ensure that Parliament could still be informed "in a timely manner", the reports and footage could still have been circulated to Members of Parliament (MPs).

It could even go to the other extreme, and grant even greater public access to the hearings, for example, by live-streaming the proceedings, or by allowing members of the public to be present in the audience — this was done in 2018 for the hearings of the Select Committee on Deliberate Online Falsehoods.

Regardless of all the possible options that the COP had, what we do know is that the publication of the first set of full video recordings was the decision of the COP — by a vote of seven against one. 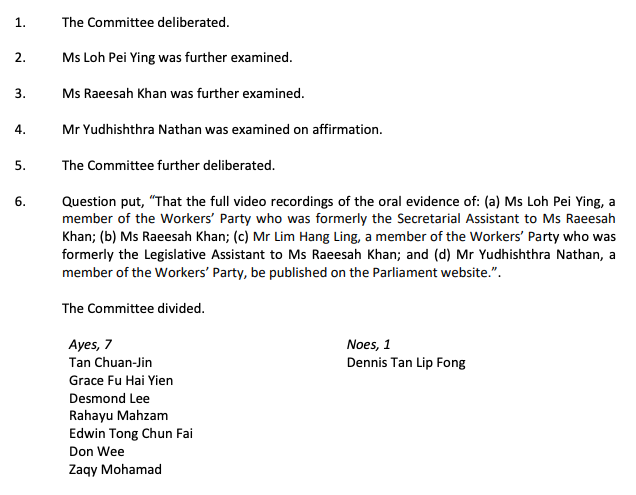 The COP conducted the first round of its interviews on Dec. 2 and Dec. 3, and published the recordings on Dec. 3, along with its report.

Publishing the report and recordings soon after the hearing (within two days at most) appears to have become a norm or standard practice:

The decisions to release the subsequent recordings continued to get a single vote of dissent from WP's Dennis Tan.

The fact that information is made available to the public certainly goes towards transparency and accountability.

But the chosen method and timing of this information's release may have resulted in some unintended outcomes.

Could witnesses "confer" via the published recordings?

For example, at the close of the hearings, witnesses were instructed by Tan Chuan-Jin, the Chairman of the COP and Speaker of Parliament, that they were "not to discuss what transpired here with anybody else".

Tan confirmed to Loh Pei Ying, the first witness, that this extended to her family, and even her husband.

The details of the proceedings were likely considered confidential as it was important to ensure that witnesses did not confer with one another to prepare their answers, or, in a worst-case hypothetical scenario, to try and sync up prepared answers so as to mislead the COP.

This was definitely something that the COP appeared to be concerned about, given its extensive questioning of Workers' Party Vice Chair and Aljunied MP Faisal Manap.

Faisal had brought a note with him to the COP hearing, and was asked if he discussed the contents with anyone, and whether he was given comments in the course of two meetings with Pritam Singh and Sylvia Lim (of two to three hours each) just prior to his appearance before the COP.

"I'm just trying to understand whether or no the evidence you're giving today is influenced by that discussion, or whether or not it is entirely your own recollection," said COP member Edwin Tong, at one point.

Faisal then said that the note had been discussed with Singh and Lim, but said that the discussion had only been to confirm that he had gotten the dates right. He also stressed that he was aware that he was not supposed to give evidence influenced by anyone else.

Lim herself apparently went on a self-imposed "news block-out" for a few days prior to her own hearing, to the point where she said she was unaware of certain things Singh said during his testimony.

Publishing the recordings within two days after the hearings, however, would have allowed the later witnesses who appeared before the COP to make sure that their evidence did not contradict previous witnesses' evidence.

Had this been done, and discovered by the COP, the witnesses could face sanctions for being in contempt of the COP. However, the damage would be done in terms of making it more difficult for the COP to uncover the truth of the matter.

"Playing to the gallery"?

With the publication of the hearings established as a standard practice or norm over the course of the past 14 days, witnesses would have given their evidence knowing that the recordings would eventually be made public in full.

This could have perhaps led to some temptation for witnesses to "play to the gallery" while giving their evidence.

Also, the fact that the recordings were released one after another would likely have resulted in more attention being paid to the first few editions (and/or the most entertaining parts), given that the vast majority of members of the public would only have time (and attention) for a limited amount of such material.

If so, one wonders whether this helps or hinders transparency and accountability.

“Playing to the gallery”was also a concern raised by then-Minister for Communications & Information S Iswaran, though at the time he was specifically referring to live-streaming in Parliament:

"Parliament is a forum for serious debate on national issues. The debate in Parliament should be vigorous, but the tone should be sober.

An element of cut-and-thrust is unavoidable, even necessary, because Members want to show Singaporeans that their concerns are expressed, and questions asked and answered in Parliament.

However, it is equally important that Members must come to grips with the issues and their complexities and not simply play to the gallery. Live broadcasts risk compromising this."

Why did the COP decide as it did?

Looking back before the current COP proceedings, the most recent occasion that the COP looked into a complaint was back in 1996, before the YouTube era, and  needless to say, before Parliament came to be live-streamed.

This means that the COP did not have much to refer to in terms of precedents, when deciding on how and when to publish materials.

The closest recent reference that the COP had in terms of publicising Parliamentary committee proceedings would be the 2018 hearings of the Select Committee on Deliberate Online Falsehoods, a rather different setting.

For one, the 2018 hearings also involved written representations that had been put forward by members of the public, and representatives of various organisations who sought to give their input.

These written representations were also uploaded by Parliament on its public website, offering fuller context to what was then discussed at the hearings.

That was perhaps why the Select Committee decided to upload a selection of highlights from the hearings, ranging from short excerpts of less than three minutes to much longer exchanges of two hours or more.

Today, the COP probably ruled out the option of uploading excerpts of its hearings fairly quickly.

For one, there are no written representations for members of the public to refer to, unlike in 2018.

Also, the COP could have also considered the greater need for transparency given the fact that it was investigating an opposition MP, and questioning a number of Workers' Party members.

Granted, the 2018 hearings were part of the process that culminated in the passing of the Protection from Online Falsehoods and Manipulation Act (POFMA) and were not without controversy and partisan undertones.

However, unlike in 2018, the COP will not only be questioning witnesses and uncovering information. It will also decide on the eventual outcome of this entire process and determine the follow-up action to be taken (if any) against Raeesah Khan.

This could explain why the COP saw fit to publish the full recordings of its hearings, as a way of assuring the public that it went through the process of interviewing multiple witnesses at length before reaching its eventual decision.

What next from the COP?

The public can expect further developments from the COP on or after Monday (Dec. 20), when the COP will consider responses from Singh, Lim and Faisal regarding a summons it issued to the three WP leaders ordering them to produce documents, according to the COP's most recent fifth report.

The minutes of the COP's meetings captured in its reports do not reveal that it intends to call on other witnesses, and the fifth report says that its proceedings have "largely concluded", except for "a few outstanding matters which will be assessed and addressed by the Committee henceforth".

Beyond that, the COP says that it will present its findings and recommendations to Parliament "in due course".