That was the first thing I said when I woke up on Friday (Oct. 29) morning.

Starting my day spitting profanities isn't exactly uncommon for me. My family can attest to this.

But on that particular day, my cursing didn’t come from a place of anger, like it usually does.

Instead, I was nervous — about-to-throw-up-and-have-a-breakdown kind of nervous.

In about nine hours, I would be interviewing Richard Madden and Gemma Chan.

Yup, they're the main actors from Marvel Studios’ latest movie "Eternals", which opens in Singapore cinemas on Nov. 4.

And Madden, the guy from "Game of Thrones" and "Bodyguard", just happens to be one of my favourite actors.

A few weeks prior to this, Mothership received an email from Disney Singapore regarding a virtual roundtable interview opportunity with Madden and Chan for the upcoming "Eternals" movie.

My editor asked if I was interested in doing the interview. It’s not that hard to guess what my answer was.

You see, at that time, I didn’t realise the magnitude of what I was agreeing to.

On Oct. 18, I went to an advance screening of "Eternals" and wrote a review of the movie, which you are more than welcome to read here:

All was well and I went about my week as per usual.

It still hadn’t fully dawned on me that I was going to speak with two Hollywood actors.

Until Thursday (Oct. 28), aka the day before the interview.

That was when everything kicked in — the realisation, the panic, and the overwhelming sense of doom.

And then the panic kicked in...

Thankfully though, I was alone at home when my anxieties greeted me. (I was working from home at the time.)

So I did the next most commonsensical thing I could do, I had a breakdown while dribbling a football around my house.

Don’t get me wrong, I was extremely thankful and excited at the prospect of interviewing both Madden and Chan.

But it was too bizarre for me to comprehend.

I’ve been a fan of Madden for years, having first fallen for his ocean-blue eyes in the 2015 live-action adaptation of "Cinderella".

I’m a big fan of Chan too, by the way (I have to say this in case some of my colleagues disown me).

But as you can tell, my mind was mostly preoccupied with Madden.

Getting my act together

A couple of trips to the toilet later, I decided that I needed to get my act together.

It was no use allowing my mind (and my body) get the better of me.

So I sat down, took a couple of deep breaths, and made a list of all the things I needed to do.

First and foremost, I needed to plan my look.

Okay yes, the interview would be conducted via Zoom and what I looked like didn’t really matter.

But I was going to speak to the Richard Madden. I had to look good. I just had to.

After an intense discussion with my best friend over text, I settled on a light brown hijab and a blue pant suit .

I then planned out my make up look:

Just like the many interviews I’ve conducted over the years, it was imperative for me to prepare some questions in advance.

I was told that the interview would be a roundtable, which meant that there would be other media outlets in the Zoom and we’d take turns to ask our questions.

This also meant that I would probably have time to ask just one or two questions.

So naturally, I prepared 50 questions.

As if that wasn’t enough, I practised asking the questions in front of a mirror.

An hour into my practice, I realised I was going mad so I texted my best friend for the billionth time that day for help.

That was when we decided to do it — a mock interview.

"I will be difficult," my friend told me, as she role played as both Madden and Chan.

The mock interview lasted all night, with my friend scrutinising every word I said (apparently, it's pronounced Rich-chard, not Ree-chard).

Before we ended our Zoom call, my best friend gave me some last words of encouragement and reminded me of my capabilities (thank you, best friend. I owe you my life).

I then performed my morning prayer and prayed to God that everything would be okay before I went to sleep.

The day of the interview

I got about three hours of sleep, which was honestly more than I expected.

My mind was on the verge of another breakdown as soon as I woke up, but I used every ounce of willpower I had in me to pull myself together.

I took some deep breaths, muttered a few curse words, and took a cold shower to wake myself up.

Thankfully, I kept myself busy throughout the day, burying myself in piles of articles, meetings, and emails from morning till late afternoon.

When it was 4pm, I finished up my work and started getting ready.

Firstly, I moved a bunch of items (guitars, football, bedside table, books, and clothes) to one side of my room, so that I would have a clean Zoom background.

I also vacuumed my room, which wasn't necessary for the interview but I just wanted everything to be perfect.

Once my room was clean, I turned on my speaker, put on some David Bowie (his songs always calm me down), changed my clothes, and started beating my face (I put make-up on my face, I wasn't literally punching myself).

I then sprayed some expensive perfume on myself. Again, this wasn't necessary and it's not like the actors could smell me through the screen, but it helped boost my confidence.

My mum came home from work whilst I was getting ready. Bless my mother, honestly.

She already knew about the interview and was briefed (by me) on what not to do that evening.

As soon as she got home, she turned off our house doorbell and ensured the house remained quiet.

At 5:45pm, I logged into the Zoom call with trembling fingers and shaky breaths.

A British woman greeted me and checked for technical errors.

I was subsequently moved into a virtual waiting room where other media outlets from across Asia and Australia were waiting.

Everyone made small talk, including me, while we waited for the actors.

But after about 15 minutes, my nerves kicked in so I muted myself and tried to calm down.

Shortly after, the moderator announced that we would be starting the interview soon.

I took a deep breath and sent my mum one last text, reminding her of my mission.

She replied with a simple yet comforting line. 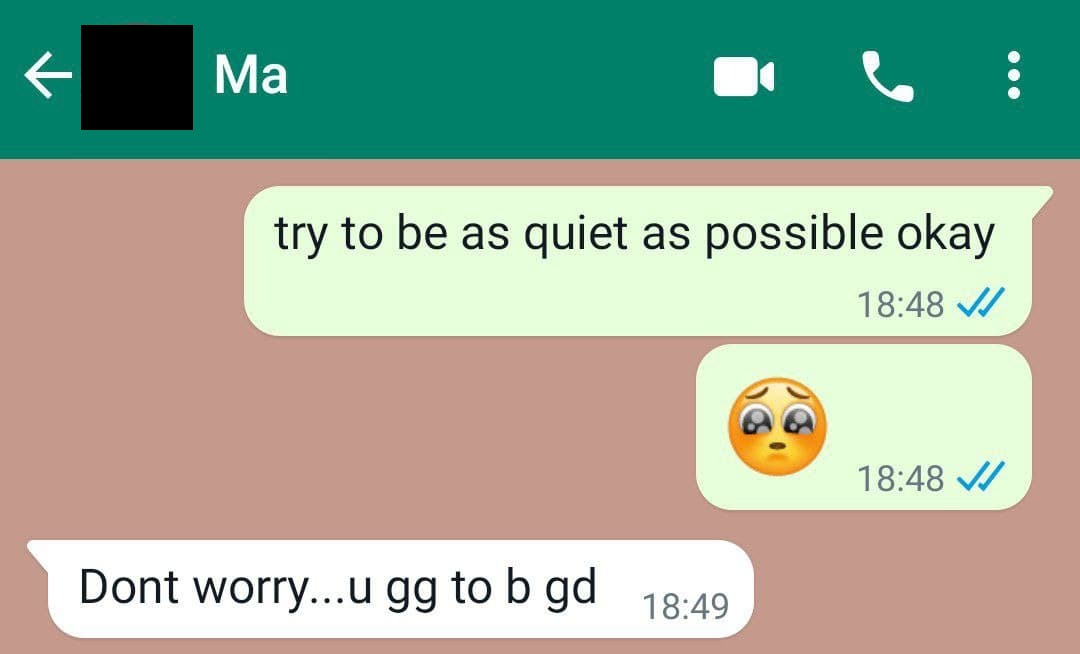 I took a couple of deep breaths once again, and next thing I knew, there they were.

Richard Madden and Gemma Chan were right in front of me—well, not physically, but they were staring at me (and everyone else) through a laptop screen.

I couldn't believe my eyes.

Everyone quickly greeted one another and the moderator began the interview immediately.

As expected, each interviewer was only allowed to ask one question due to time constraints.

We had to wait for the moderator to call our name before we could ask our question.

I wasn't the first one. Thank God.

But after about a few minutes, my name was called.

I took the deepest breath I'd ever taken in my entire life and I unmuted myself.

I subsequently did the only thing my mind could think of in that moment — I directed my question specifically at Madden (I'm sorry, Gemma Chan).

Here's how our interaction went:

Me: "Um.. Hi Richard and Gemma. My name is Syah. I'm from Singapore. What I want to ask is particularly for Richard. Um... I was very compelled by your character actually because as the film progressed, you kind of realise that he's not purely good, he's not purely bad, without giving too much away. Um.. yeah... and he starts shifting towards a grey area. So I'm just wondering... what kind of impression do you want Ikaris to leave on viewers?"

Richard Madden: "I kind of less think of the impression I want to leave on people and more about the character — why I was drawn to him in the first place. He is this Eternal being that, much like all the other Eternals, has lived amongst humans for so long that he starts to become more and more human himself. I think there's nothing more human than having to wrestle between your head and logic and duty and your heart and love. And I think that's what takes him into a grey zone, which may be different from some of the other Marvel superheroes who can be definitively heroic or villainous. He crosses into this middling zone which is more human, I think, than a superhero.

As soon as I finished asking my question, my mind went completely blank.

I just sat there in my room, staring at my laptop screen, vaguely processing the fact that Richard Madden was talking to me.

Oh my God, he was talking to me — a 22-year-old Singaporean girl who lives with her mum in a small HDB flat in Tampines.

The interaction only lasted about a minute-and-a-half, but it'll be in my memory forever.

My mind was still in a daze until a couple of moments later when the interview ended.

Everyone bade farewell to one another. I waved my hand at my laptop screen, hoping the man of my dreams saw me among the many faces in the Zoom call.

And then it was over.

I got up from my chair, stood in the middle of my room in complete silence, looked up at my ceiling and said out loud: "What the f*ck."