Nov. 1 was a significant day in Parliament, due to the admissions made by Raeesah Khan, Workers' Party (WP) Member of Parliament (MP).

In a prepared statement, Raeesah admitted that she had earlier lied in the House about an anecdote she shared about accompanying a rape victim to a police station.

Previously, the MP for Sengkang GRC had an exchange with K Shanmugam and Desmond Tan, political office holders of the Home Affairs Ministry, when recounting her experience.

Shanmugam and Tan asked for more details about the allegation, but was rebuffed by Raeesah, who cited the confidentiality of the person in question. The police later put out a statement that they had checked their records but could not find a case matching Raeesah's description.

Anecdote came from another person in support group she attended

On Nov. 1, Khan stated that she herself is a sexual assault survivor, and that she had not actually accompanied the rape victim to a police station to make a report. Instead, she had heard the person in question share the anecdote in a women's support group of which Raeesah herself had been a part.

Leader of the House Indranee Rajah asked a number of follow-up questions, before raising a complaint and referring the matter to the Parliamentary Committee of Privileges.

On the same day, WP leader Pritam Singh shared a statement that Raeesah should not have been untruthful in Parliament.

Separately on Nov. 2, the WP announced that it would form a disciplinary panel to look into the matter.

On Nov. 3, Speaker Tan Chuan-Jin announced that as Indranee and Shanmugam have recused themselves from the Committee (as the member who raised the complaint and the minister of the relevant ministry in question, respectively), they will be replaced.

Their places on the Committee will be taken by Minister Edwin Tong and Parliamentary Secretary Rahayu Mahzam.

Raeesah's admissions set off a flurry of  comments and observations from a wide variety of local political commentators.

Among other things, the issues raised included the impact on WP's image and credibility, and the issue of society's response to sexual assault survivors and their accounts.

Henson said that Raeesah has lost credibility with her, and agrees that the Committee of Privileges should be activated.

Da Cunha opined that Raeesah would likely have a "relatively short parliamentary career".

He said that prominent civil society activists around the world struggle to become successful politicians.

Tan urged for Singaporeans to keep pushing for scrutiny of police conduct and better responses to sexual violence, regardless of Raeesah's actions.

Mysara said sexual assault survivors in Singapore have already found it difficult to get support, even without Raeesah's actions.

Vadaketh said Raeesah's actions had given a "shot in the arm" to the detractors of Singapore's political opposition and other ideologues, and expressed sympathy towards Raeesah as a sexual assault survivor.

Bilahari noted that the admission came only after "police investigations made her story untenable" and asked if Raeesah would offer to resign. 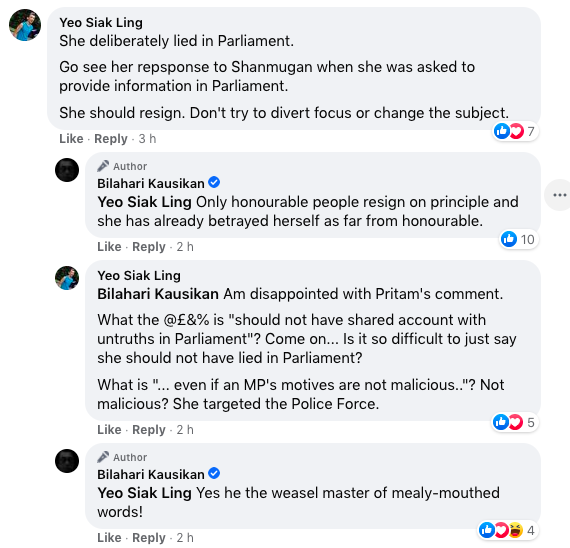 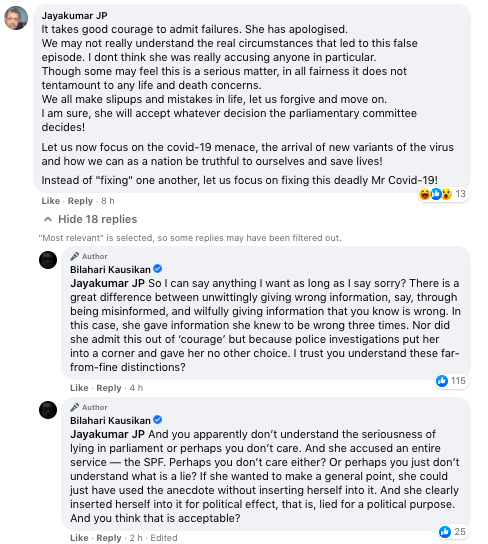 Han said that she was worried that the "establishment machinery" would focus on Raeesah's lie instead of the "actual, real problem at the heart of the matter".

Walid said that while he liked Raeesah and feels that she still has lots of potential to effect societal change, her error was as politically costly as it could get, and the WP has "little choice" but to drop her.

Wham said he was more sympathetic towards Raeesah. He added that Singaporeans seem to be "more unforgiving" when an opposition politician makes a misstep.

Ong said that this is the first time he's aware of that an MP has been caught "outright lying" and it looks "very bad" on her and the WP.

On Raeesah, he felt that she seems to be "an angry young lady" who got "carried away" with the passion she felt for the disadvantaged segments of the society. 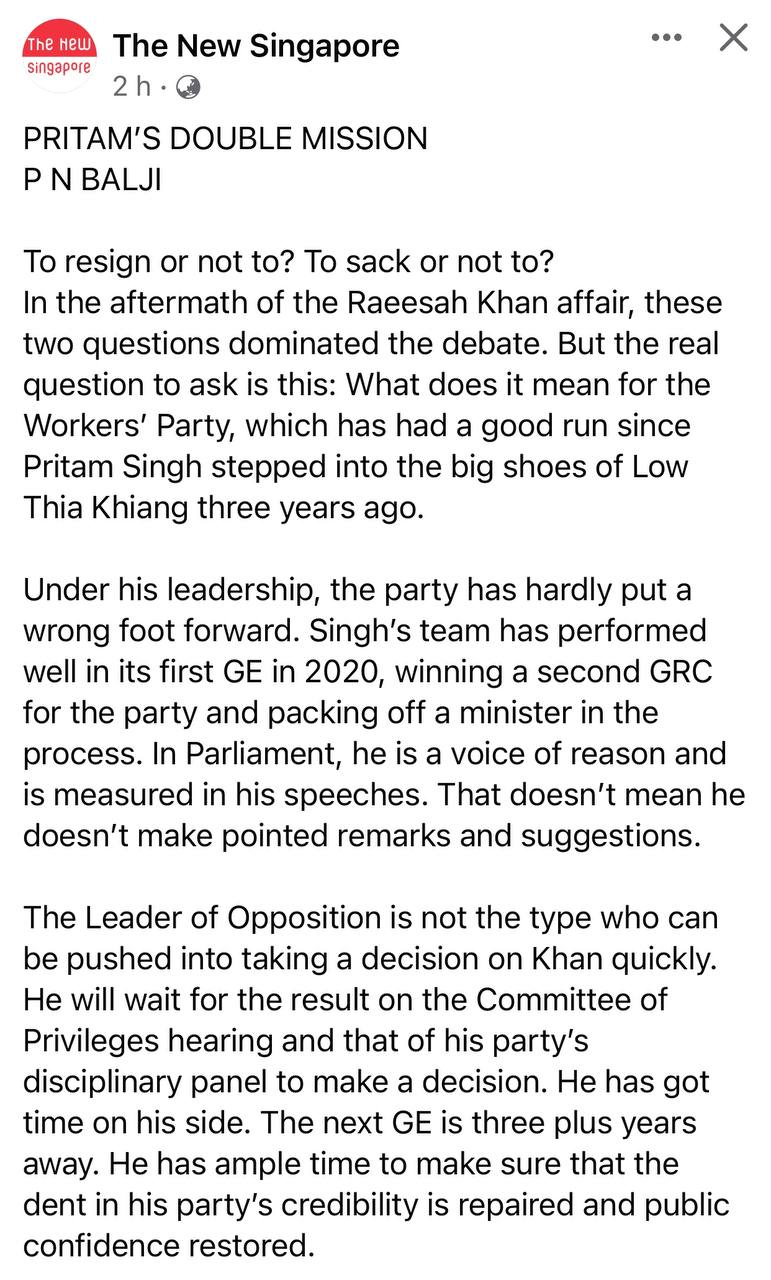 Law said, among other things, that she felt disturbed that the Singapore Police Force "had to prove what they did not do."

Cheng took a harder stance and called for the Committee of Privileges to not only investigate the matter, but also the Workers' Party in Parliament. 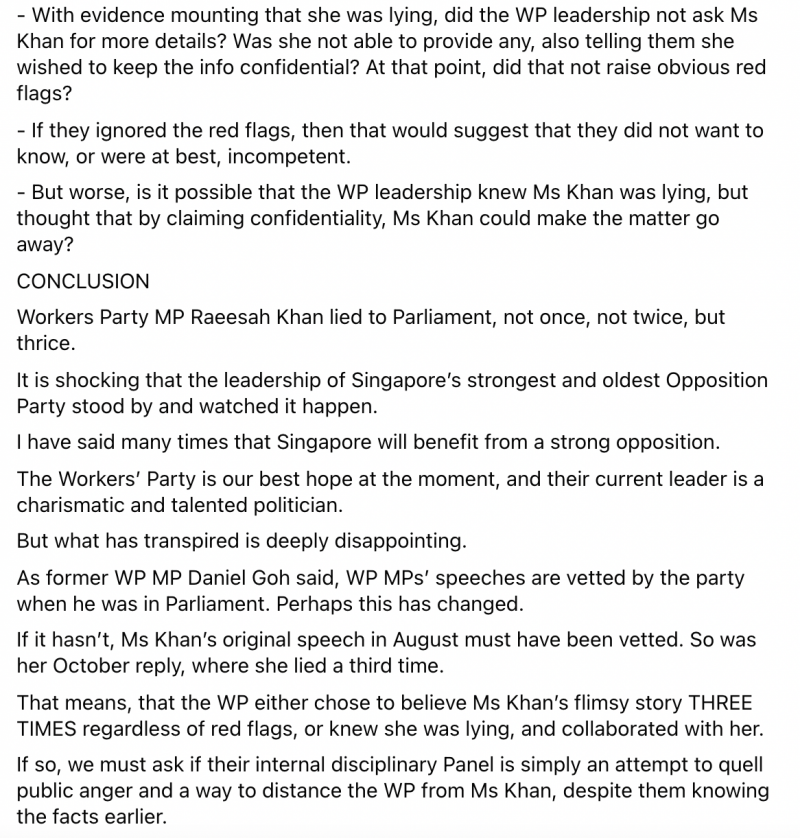 Lee responded with a phrase from gaming culture.