People who are unvaccinated in Singapore are calling on the government to allow them into malls after it was announced that they will soon be disallowed from doing so starting Oct. 19.

The unvaxxed made their collective voices heard in a petition started on Oct. 10, which saw more than 6,000 signatures registered over two days.

However, the petition has since disappeared from the Change.org site on Oct. 12, without any indication why it was removed by will or force.

It is not known if the petition was taken down by the petition starter, who signed off as "A very Angry n Oppressed Sporean" and whose name is supposedly Mel Ong, or if it was removed as it violated Change.org's terms of service.

The petition with thousands of signatures appeared to have derived support from the remaining minority of 15 per cent of people located here, who are not fully vaccinated either by choice or are unable to do so due to health reasons.

Currently, statistics show that 85 out of 100 people in Singapore have received their first dose, and 83 are fully vaccinated as of Oct. 10, 2021.

A cached copy of the petition can still be viewed here.

The petition demanded that the unvaccinated in Singapore be allowed into shopping centres as "most goods and services are concentrated in malls to maximise space usage" on "a densely-populated island".

The petition questioned how can unvaxxed people be denied essential goods and services for themselves and their families.

The argument went further as it questioned how is preventing the unvaxxed from going into malls fair, since vaxxed people will become unvaxxed over time if they refuse booster shots.

The petition also highlighted the plight of pregnant and breast-feeding women who are unvaccinated and those with health issues that prevent them from getting inoculated.

The petition then proceeded down the rabbit hole by spouting claims that the vaxxed can carry higher viral loads than the unvaxxed, there are dangers associated with getting vaxxed, and that countries such as Israel have been dealing with the ineffectiveness of blanket vaccination within their population.

The petition added: "Your explanation that your differentiated measures are to protect the unvaxxed are all inaccurate!"

The petition even alleged that Singapore through its state investment vehicles have invested heavily in pharmaceutical companies, which makes it a conflict of interests to vaccinate the population using the products developed and manufactured by those companies, as it inadvertently helps with big pharma profits.

Responses to the petition in agreement with its demand showed that those who signed it were against the supposed heavy handedness of the new restrictions, as well as feeling indignant about being discriminated against for being unvaxxed, regardless of personal issues.

One comment on the petition on the Change.org platform said a measure such as restricting dining in for the unvaxxed would have been understandable, but preventing the wholesale entry into the mall to access other essential services, such as banking, is too much to bear.

Another commenter also voiced disagreement with the wholesale ban as it meant the unvaxxed might be prevented from entering shops that provide medical services, such as clinics.

However, it is understood now that exceptions have been made for the unvaxxed to attend medical appointments in malls, which was announced on Oct. 12.

Sentiment of the unvaxxed

The petition also gained currency in Telegram groups that voice scepticism about vaccination.

One message captured a smidgen of the conversations passing through these groups, which highlighted the issue of discrimination felt by the unvaxxed, as well as repeating many of the common talking points already raised about vaccination.

I just went into Shaw Centre and they implemented the new system with the mobile tablet. I felt very discriminated cos it flashed my first 2 digits IC XXXX onscreen and stated I was unvaccinated. The guard said you not vaccinated ah? I mean this is not right it’s my personal medical data. To answer your question. I need to takeaway food, groceries, occasionally beauty services, banking and shopping for clothes makeup, skincare not suitable to buy online. I felt really angry today after that thinking I am not sick I am healthy yet the G has discriminated me from entering in a week’s time unless I pay for a PET to declare I am not sick. People that vaccinated early this year would have had almost 0 protection as well. Why do I need to be pressured to take a vaccine that 98% feels asymptomatic yet G needs 100% of us vaccinated or they are determined to treat you like an outcast

In response to the petition, a counter petition was started demanding that unvaccinated people in Singapore should be denied entry into malls.

Going to the Mall is NOT a basic right. You can get healthcare from non-mall clinics, groceries from non-Mall supermarkets and basically anything online.

The petition, started on Oct. 11, received more than 600 signatures after one day. 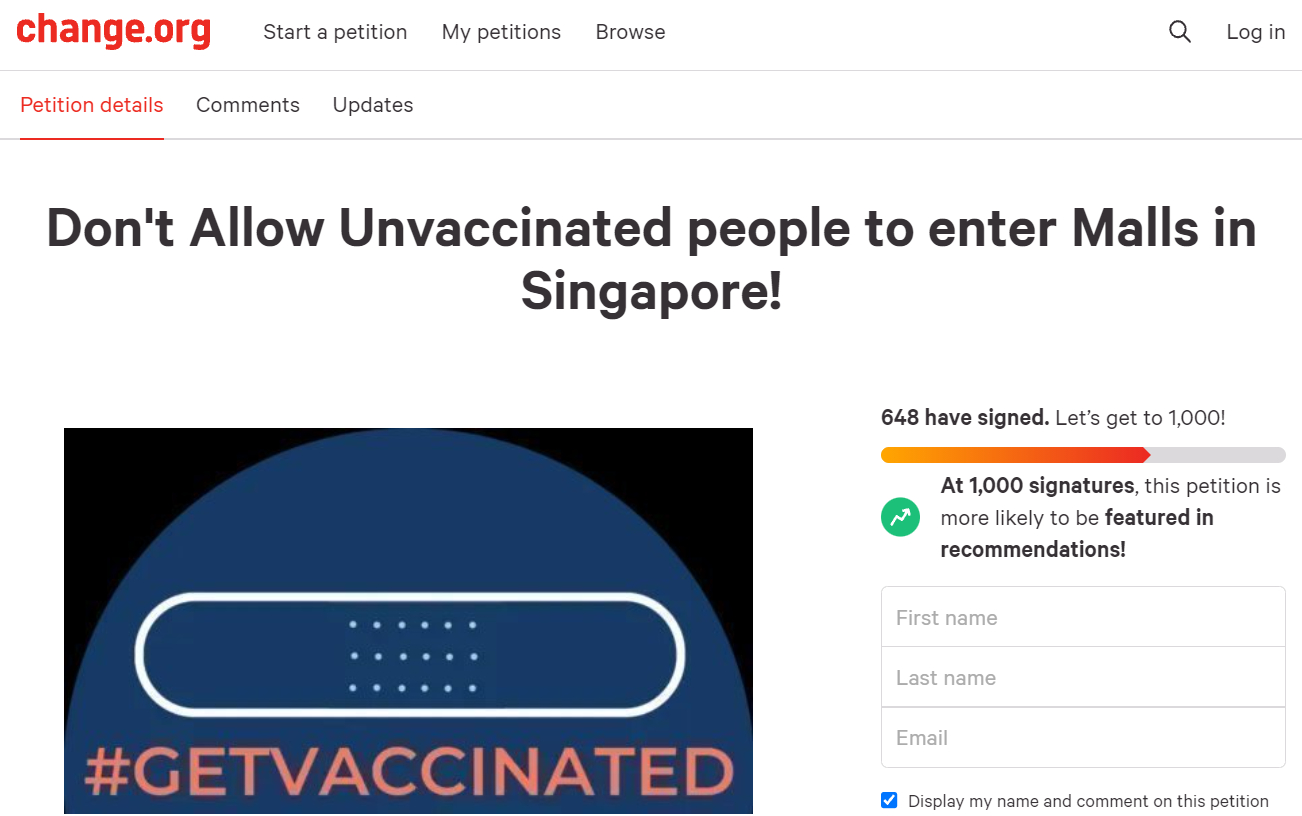