Terry Xu, editor of the now defunct The Online Citizen, which was recently taken offline, has raised an extra S$87,000 in 13 days to pay the additional legal costs that was awarded to Prime Minister Lee Hsien Loong.

This sum is on top of the S$210,000 that was previously raised to pay off damages awarded to PM Lee, for two defamation suits he filed over an article published on TOC.

According to Xu, 2,053 donors contributed to this first tranche of money.

A total of 725 individuals provided the second tranche of donations, Xu said on Oct. 26.

The demand spurred the urgent appeal for more funds, which the public duly provided.

Details of the full sum raised and its progress was put up for public viewing by Xu. 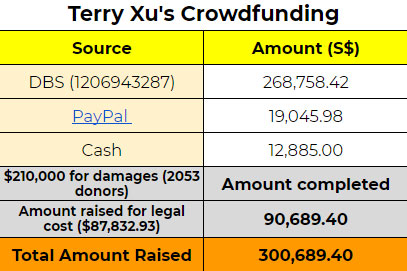 The High Court on Oct. 13, 2021 awarded Prime Minister Lee Hsien Loong more than S$87,832.93 in legal costs for the defamation suits he filed over an article published on TOC, following a hearing held in chambers to determine costs.

Such costs are usually awarded to the plaintiffs after they are successful in civil suits.

The costs order came after PM Lee won his suits against Terry Xu, the chief editor of the socio-political website, and Rubaashini Shunmuganathan, a Malaysian woman who authored the article published on Aug. 15, 2019.

Xu's lawyer Lim Tean posted on his Facebook page that his client was ordered to pay costs of S$87,832.93 and appealed for donations.

Xu also made the same announcement on his own Facebook page.

PM Lee's press secretary reiterated that the prime minister will donate to charity the sums that he has been awarded.

Rubaashini did not enter an appearance to defend the suit against her, and judgment in default was granted in favour of PM Lee, who was represented by Senior Counsel Davinder Singh.