Many of us would have seen this logo at some point in our lives.

If not outside the corner of Bras Brasah MRT station (i.e. the NTUC Trade Union House), then encircled with blue and white at one of their many FairPrice outlets.

This logo belongs to the National Trades Union Congress (NTUC), the national confederation of trade unions in Singapore.

So, why is it found everywhere – from supermarkets to childcare centres and insurance products?

NTUC was established in 1961, before it formed a Tripartite Partnership with the Ministry of Manpower (MOM) and the Singapore National Employers Federation (SNEF).

In those years, Singapore was an economic backwater – things like jobs, housing, food, and other daily essentials were major concerns.

The concept of NTUC setting up “co-operatives” was introduced in 1969, during the “Modernisation of the Labour Movement” seminar run by the union.

It was strongly promulgated by then Finance Minister Goh Keng Swee, since NTUC could tap on its diverse union networks to compete effectively.

This would provide more Singaporeans access to affordable essential services and products.

When insurance was for the rich

Life insurance doesn’t sound all that sexy, but in the 1970s, many people were not insured, as insurers mostly targeted the bourgeoisie (from higher income groups).

Often, if workers were suddenly stricken with illness or injury, the surviving family members found themselves in dire straits.

NTUC Income was thus created to make insurance accessible to the masses; with the low-cost premiums co-paid by the unions and its workers.

This way, insurance was made more affordable for many blue-collar workers, who had been left by the wayside by commercial insurers.

Then came a need for affordable essential commodities, amid the spiralling costs of daily essentials.

This was caused in part by the global oil crisis in the 1970s, as well as profiteering schemes by traders who hoarded staples like rice and cooking oil.

To disrupt profiteering and stabilise prices for the common man, NTUC Welcome (now NTUC FairPrice) was established in 1973 in Toa Payoh, as Singapore’s first consumer co-op.

Today, FairPrice has over 370 outlets islandwide, and continues to serve as the go-to retailer for reasonably-priced essential goods, especially in times of crisis.

When another crisis (re: Covid-19) hit our shores last year, some retailers again jacked up the prices of surgical masks and sanitisers, as these became sought after commodities.

It was perhaps the best thing for all that NTUC's Unity Pharmacy not only stabilised the prices of the masks, but introduced purchase limits to prevent hoarding.

And while online shopping has changed the way many Singaporeans now shop for groceries, “FairPrice On Wheels” was rolled out during the circuit breaker; very much like mobile mamak shops.

Staples like rice, milk and toiletries were brought to the doorsteps of residential estates islandwide, delivering convenience to many seniors.

The prices of FairPrice Housebrand products, like oil, even coffee mix, were also frozen for six months, so that daily staples could continue to remain affordable for the people.

The conundrum of working parents

As Singapore rapidly industrialised towards the end of the decade, another social need emerged.

As more jobs were created, more women who used to primarily play the role of caretaker in the family joined the workforce.

This left many families in need of childcare services, to look after their young children while both parents were at work.

In 1977, NTUC Childcare was formed to provide working families with quality, affordable and accessible childcare facilities.

Since then, it has been renamed to NTUC First Campus, and evolved to support over 160 pre-schools across Singapore. 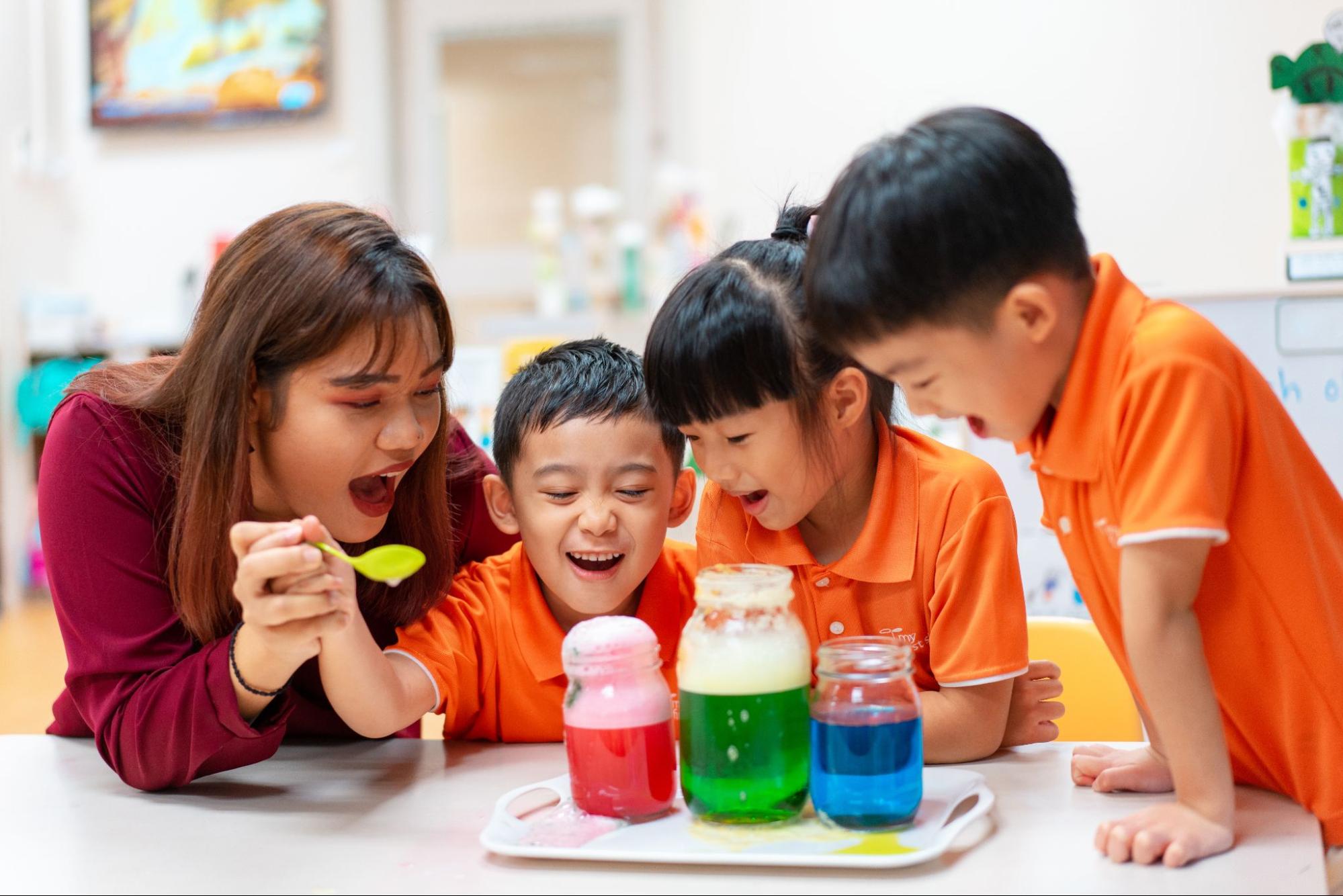 And perhaps because there’s nothing that quite gets one’s spirits up like a hearty meal and a shot of Kopi-O-Kosong, NTUC FoodFare was set up soon after in 1995, after union leaders approached NTUC for an enterprise that could provide “affordable, tasty, and healthier meals”.

NTUC FoodFare has continued to keep the prices of essential F&B items low in the face of imminent doom (for example reducing the price of drinks during the Asian Financial crisis, and again benchmarking the price of food during SARs in 2003).

This community initiative supported several local F&B businesses in going digital, quite useful in a time when increased reach (especially during tightened dine-in restrictions) matters to a small business’s survival.

All apparently with zero commission fees and onboarding cost.

60 years and beyond of care and support

In honour of its members from practically three generations, NTUC Enterprise is offering a suite of exclusive offers in celebration of NTUC’s 60th anniversary this year. 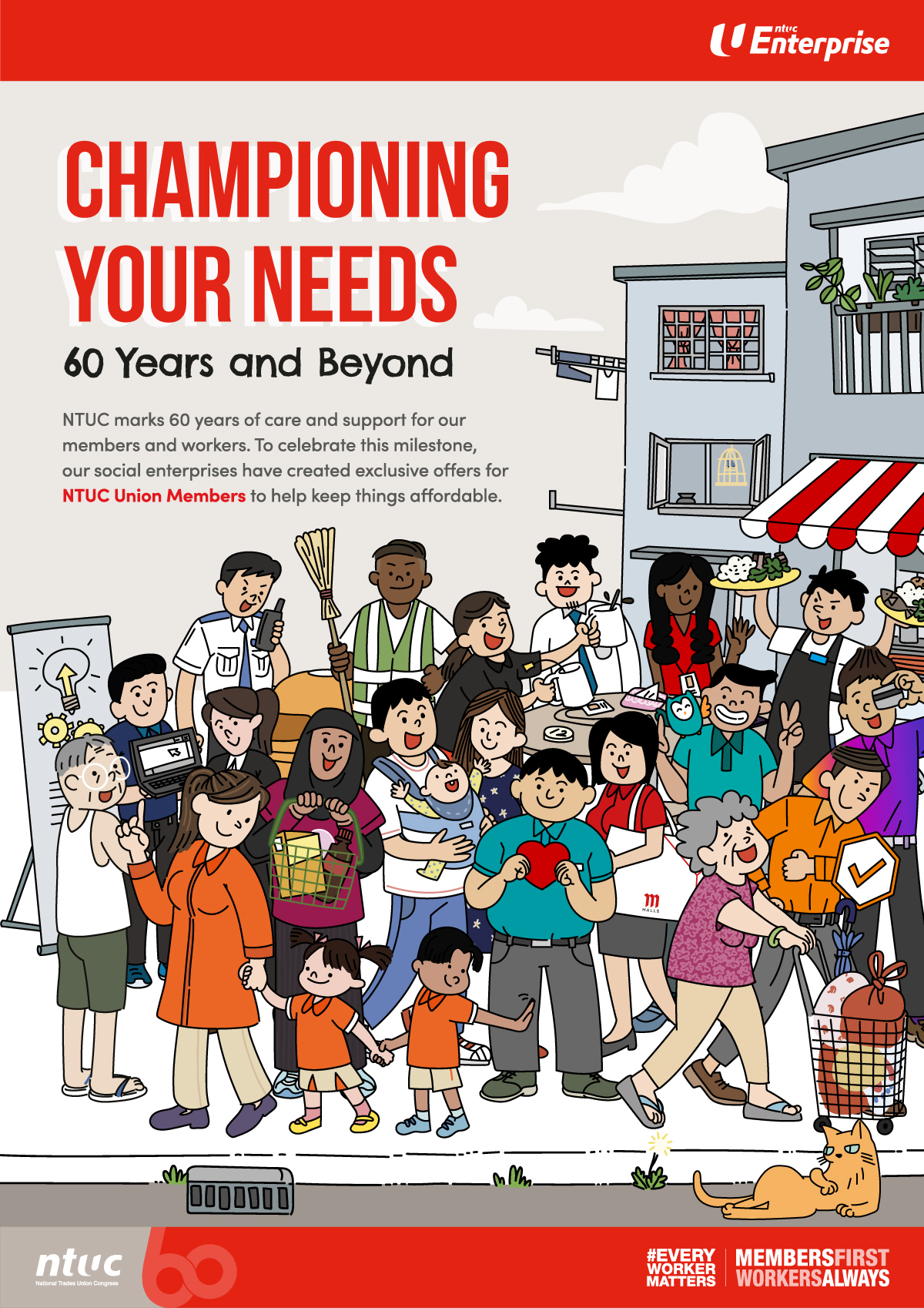 Naturally, the theme is to help keep things affordable.

Several special deals have already been launched, and will be available until December 2021 for all NTUC Union Members.

More information about these deals can be found on their website.

You can also check out this video for more on NTUC Enterprise's brand heritage.

Top image via Ministry of Information and the Arts Collection, courtesy of National Archives of Singapore.

This sponsored article by NTUC Enterprise made the writer want breakfast.