Cyclists from all rides of life have made the pilgrimage to the southwestern corner of Singapore out of adventure, boredom, or for bragging rights.

Those who have done so were more likely than not trying to reach “Lamp Post 1” located along Tuas South Boulevard, a heavy industry area.

That street light has since become a landmark due to its colourful, legally vandalised, and hard to reach nature, and all because it first started out as the recipient of stickers pasted all over it without anyone's explicit consent.

Over the years, cyclists have stuck numerous stickers onto the lamp post, despite the colourful adhesive pieces being routinely removed during each cleaning by contractors in charge of the lamp post's maintenance.

However, the challenge each time is to not only paste over existing stickers, but also to see how high one can paste anything.

The highest part of the lamp post that has been accessed with stickers has been between 5m to 10m high on Lamp Post 1, which requires a ladder to reach.

How stickers get so high solved

Naturally, this has led to questions as to how anyone who made the voyage to Lamp Post 1 on bicycle even have the wherewithal to slap a sticker so high up?

Although it has been claimed that some riders bring along a ladder to access hard to reach places, the solution appears to have been quite mundane.

A photo put up on Facebook on May 2 showed exactly how cyclists, with a bit of team work, managed to put up a sticker way up on the lamp post. 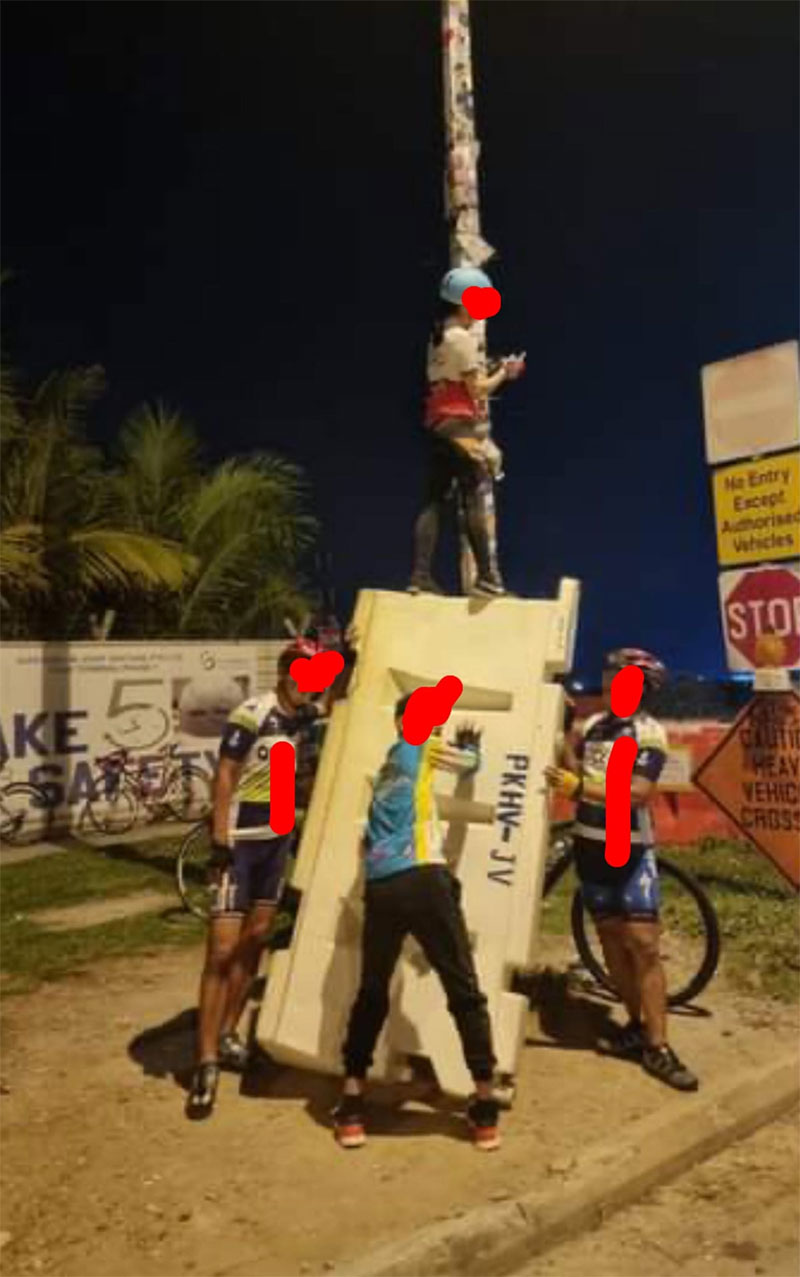 It turns out the assistance rendered by a water-weighted crash barrier tilted onto its width was all it took to get anything up 4m.

On Jan. 7, 2021, then-transport minister Ong Ye Kung announced that the authorities will grant an exception to Lamp Post 1 and will no longer clear stickers off of it.

His concession was appealing and unorthodox, as it amounted to allowing the lamp post to be defaced.

But as to how Lamp Post 1 even became a thing, can be traced to a cycling excursion in 2014.

More than 60 cyclists from the Love Cycling Singapore group travelled to Tuas that year.

The group’s co-founder was the first to augment the appearance of the lamp post by putting a “Pedal Until Shiok” sticker on it.

That sticker was later removed by the authorities.

At that time, the lamp post was located at the farthest reaches of Singapore and it was used to mark the end point of the cycling route.

Land reclamation in the west then occurred for the construction of the upcoming Tuas Mega Port.

The Lamp Post 1 moniker was likely to have been applied to another lamp post farther south along Tuas South Boulevard, given how Singapore's land had expanded out into the sea.

The last time all stickers on Lamp Post 1 was removed completely was in December 2020.

After which, Minister Ong stepped in to announce all existing stickers will be preserved, to the cheers of the cycling community in Singapore.