Earlier today (April 20), the Ministry of Health (MOH) reported 14 new cases of Covid-19, including one case in the dormitory.

He is a 35 year-old male Bangladesh national who is a Work Permit holder.

He developed a runny nose on April 16 but did not report his symptom. On the same day, he was tested for Covid-19 as part of Rostered Routine Testing (RRT). His pooled test result came back positive for Covid-19 on April 18, and he was immediately isolated and conveyed to the National Centre for Infectious Diseases in an ambulance.

An individual test was done on April 18, and his test result came back positive for Covid-19 infection the next day.

His earlier tests from RRT – the last being on April 9 – were all negative for Covid-19 infection. His serology test result has come back positive but MOH has assessed that this is likely a current infection.

Case 62181 received his first dose of Covid-19 vaccine on March 12, and the second dose on April 13. This likely accounts for his positive serology test result as he has produced antibodies following vaccination.

However as it typically takes a few weeks for an individual to build up immunity after completing the vaccination, he was likely to have been infected before he was conferred protection after vaccination.

Epidemiological investigations are in progress.

In the meantime, all the identified close contacts of the case, including his dormitory and workplace contacts, have been isolated and placed on quarantine, and will be tested at the start and end of their quarantine period so that MOH can detect asymptomatic cases.

Here follows some information about the 13 other imported cases:

As part of epidemiological investigations into Case 62045, MOH tested all her close contacts, including Case 61536, a 43 year-old Indian national who is a Work Pass holder.

He arrived from India on April 2, and was asymptomatic. His on-arrival swab tested positive for Covid-19 infection and he was conveyed to a hospital.

He was subsequently assessed to be a recovered case based on his high Ct value which indicated a low viral load, positive serology test result on April 4, as well as negative pre-departure test taken on March 31.

He was discharged from the hospital on April 6, without the need for further isolation as he was deemed to have been shedding minute fragments of the virus RNA, which were no longer transmissible and infective to others.

On April 17, as he had been identified as a close contact of Case 62045, he was tested for Covid-19 and his test result came back positive. His serology test result is also positive.

The Ct value of his polymerase chain reaction (PCR) test taken on April 17 was lower than his test done on April 2, indicating a higher viral load this time. His antibody titres are also currently very high, suggesting that he was exposed to a new infection which boosted his antibody levels.

MOH, in consultation with an expert panel which comprises infectious diseases and microbiology experts, has assessed that he was likely to have been re-infected with Covid-19 recently.

Their epidemiological investigations indicate that Case 61536 was probably re-infected when he was in India, and had been infectious when he returned to Singapore. He then passed the infection to Cases 62045 and 62143.

With the emergence of new variants of concern around the world, MOH will closely monitor for re-infection of recovered Covid-19 cases, and are reviewing border measures for recovered travellers.

Similar imported cases suspected of re-infection will be isolated and undergo repeat Covid-19 PCR tests to monitor the trend of their viral loads, to ensure that such cases are detected promptly.

37 more cases have recovered and been discharged, taking the number to 60,540.

There are currently 74 confirmed cases who are still in hospital. Of these, most are stable or improving, and one is in critical condition in the intensive care unit.

221 are isolated and cared for at community facilities. 30 have passed away from complications due to Covid-19 infection.

MOH maintains a list of public places visited by Covid-19 cases during their infectious period.

No new locations were added to the list today (April 20). 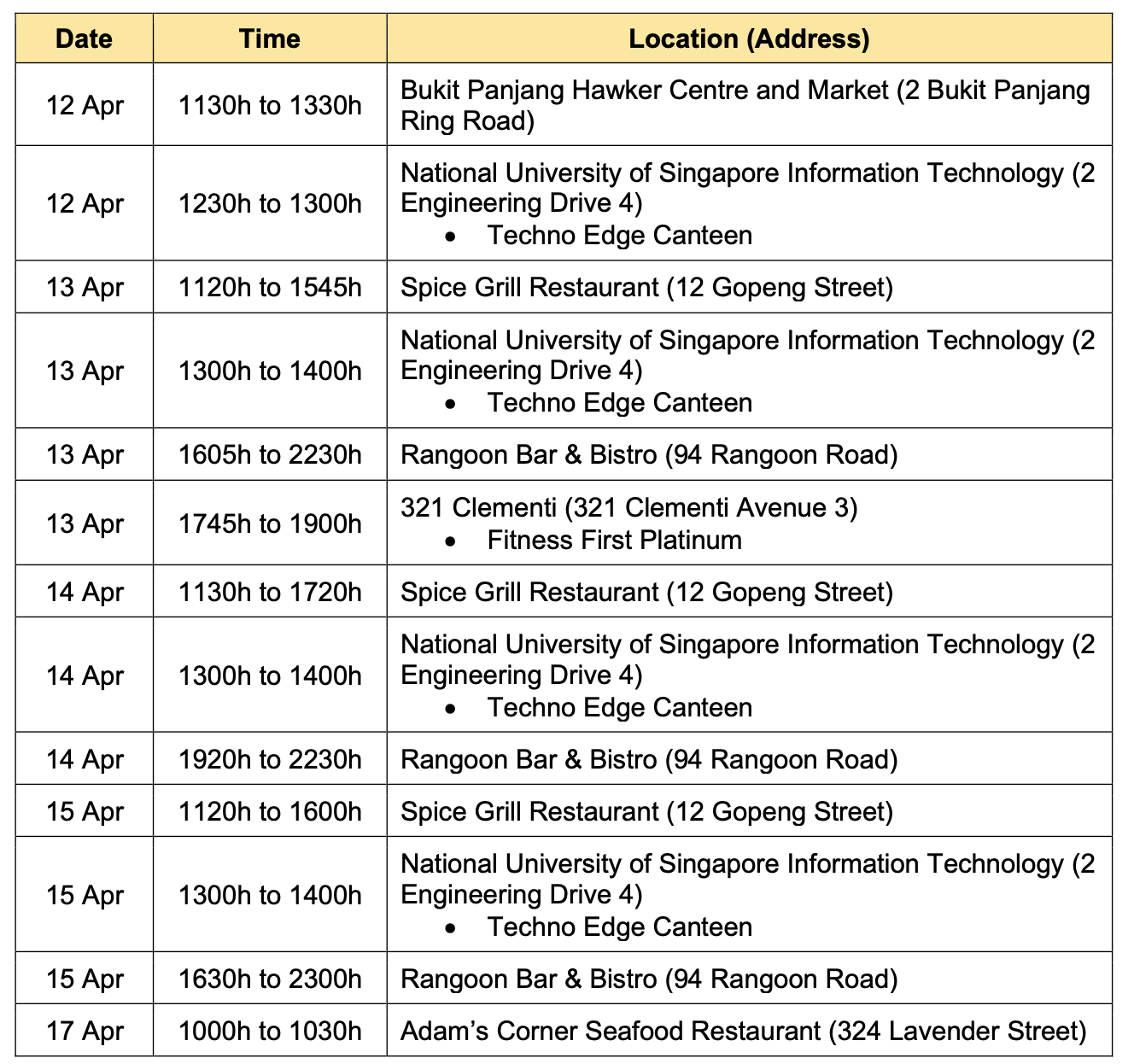 Top photo via Ministry of Health.