Joseph Conrad Mendoza, the Indian man credited for writing a song, We Can Achieve, that sounds exactly like Count On Me Singapore, has gone on record to say he was inspired by the You Are My Sunshine country song to write his piece.

Mendoza, 58, a social worker and teacher in India, was speaking to CNA over video when he made this fresh claim.

This issue, regarding the likely plagiarism of a song that many Singaporeans love and want to protect as their own since 1986, has become a dispute over copyright infringement between Singapore and one person in India.

Mendoza had said previously that he was not even aware of Count On Me Singapore until a few days ago, when he was accused of plagiarism of a Singapore patriotic song.

In a snippet of a March 18 video interview that CNA conducted with Mendoza, the Indian man explained that he derived his We Can Achieve tune by improvising on another well-known song, You Are My Sunshine, which was written in 1939.

Mendoza said in the interview: "Funny, I was teaching the song, You Are My Sunshine."

He proceeded to sing the tune on video: "You are my sunshine..."

He then continued: "And our whole thing was a vision for children to build confidence. And then the idea for the first part of the song came in from there."

This explanation was followed by him singing the You Are My Sunshine tune, before improvising and transitioning into the tune of the first verse of Count On Me Singapore.

CNA also managed to interview Hugh Harrison, the Canadian who has long been awarded songwriting credits for Count On Me Singapore. 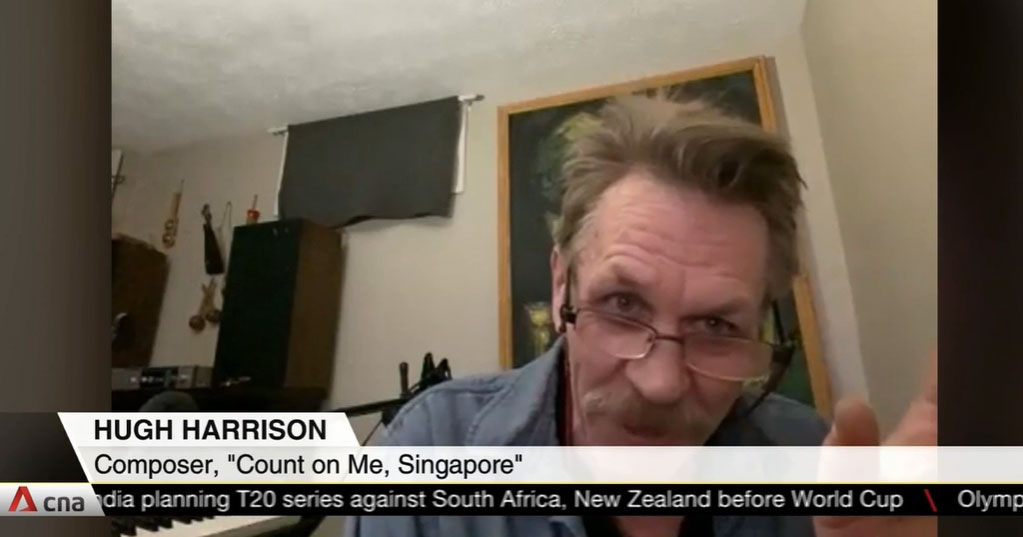 Harrison, who appeared baffled and miffed at the same time in the video, said during the interview: "It's insulting to me that out of all the compositions in my life, that this one I will choose, somehow, magically, find out about it in 1986 before the internet in one day when I flew from Hong Kong to Singapore."

"Like I would have magically heard his tune and written it down quickly note for note. Imagine how I could have possibly done that."

The interview with Mendoza also showed him failing to explain on video why he thinks Count On Me Singapore and We Can Achieve sound so similar.

His view, he said, is that he cannot explain, but coincidences do happen.

Mendoza said: "It's very close, it's nearly the same. I really just have no words to say. But these are very common things we use in English."

Willing to take down songs

However, Mendoza has offered to remove his song from public platforms, as he said he would be willing to do so if it appeases everyone.

A copyright lawyer that CNA interviewed said there is a strong case of copyright infringement, unless both parties can prove that they created the work independently.

The lawyer noted that Harrison can pull out notes and metadata of his composition, such as the date of the recording or the composition notes, and use it as evidence of his input in the work's creation.

Mendoza, on the other hand, can make his case by getting to court the orphans he claimed he taught to sing the song, and for them to say that they were taught the song as it is back in 1983.

If Mendoza continues to stick to his claim that he is the original composer of the tune, it means he was 20 years when he had written the song.