Videos that purportedly show students supposedly from Ngee Ann Polytechnic urinating on one another were shared widely on social media on March 22, 2021.

The footage, which has caused widespread outrage in Singapore, showed three pairs of male students taking turns to enter a shower cubicle to urinate on the backs of two naked male students.

Not bullying, but consensual and mindless fun

However, shortly after the videos gained traction online, one of the students who was supposedly urinated on came out to set the record straight by saying the activity that was filmed was consensual.

In an Instagram Stories update, the student whose handle was revealed but we have censored, said the students who urinated on their peers were just doing "something consensual", but people online have spun it as "such a bully story".

The male student also dismissed accusations that he was being bullied.

He wrote: "Nah bro, I was cool with it, just mindless fun to me! To be honest, like y’all just got to chill mans!"

The post on the social media consisted of slang, such as "ham" and "skinny".

The "ham" lingo means "being extreme", while the contemporary meaning of "being skinny" translates to "not being privy to the facts".

Appeal to the public to stop sharing video

The clarification put up by the male student also said he wanted to "clear things up" and appeal to the public to stop sharing the videos.

One of the text boxes on the Instagram Story also said the male student would be answering any queries via direct message.

But it appears his social media account has been made private or removed.

This was the post that was put up, in full, with edits made to punctuation and paragraphing to enhance readability:

Hi everyone! I'm sure y'all are aware of the dumb video that got viral on social media today or yesterday depending on the time I post this! And tadah, yes, first thing I would like to clarify is that, yes, I am the one who got peed on, yes.

But the comments section being the comments section really went ham on the imagination! I saw things like like, they are bullying??? Nah bro, I was cool with it, just mindless fun to me! To be honest, like y'all just got to chill mans! I, for one, do not know who posted the video and to be honest, I don't want to know but y'all ain't being SKINNY about this!!!

I have some of my friends getting blasted on media!! Yo not cool, they just did something consensual but y'all make it to be like such a bully story, it's not! And coming from me, yo.

I know this ain't the best crafted message and I know my future is kinda f*cked? But if I can ask everyone to do something, is it okay with everyone on the net! Please stop spreading these videos. I am uncomfortable with it being spread so rapidly yo! I know this is quite dumb and to be honest, I'm a lowkey person but I just want to clear things up while the iron is hot?

But yes, please spread this message around if you guys don't mind!!! Thank you guys, have a good week ahead :> and don't ruin my week if that's too hard to ask mans, just want a break :> 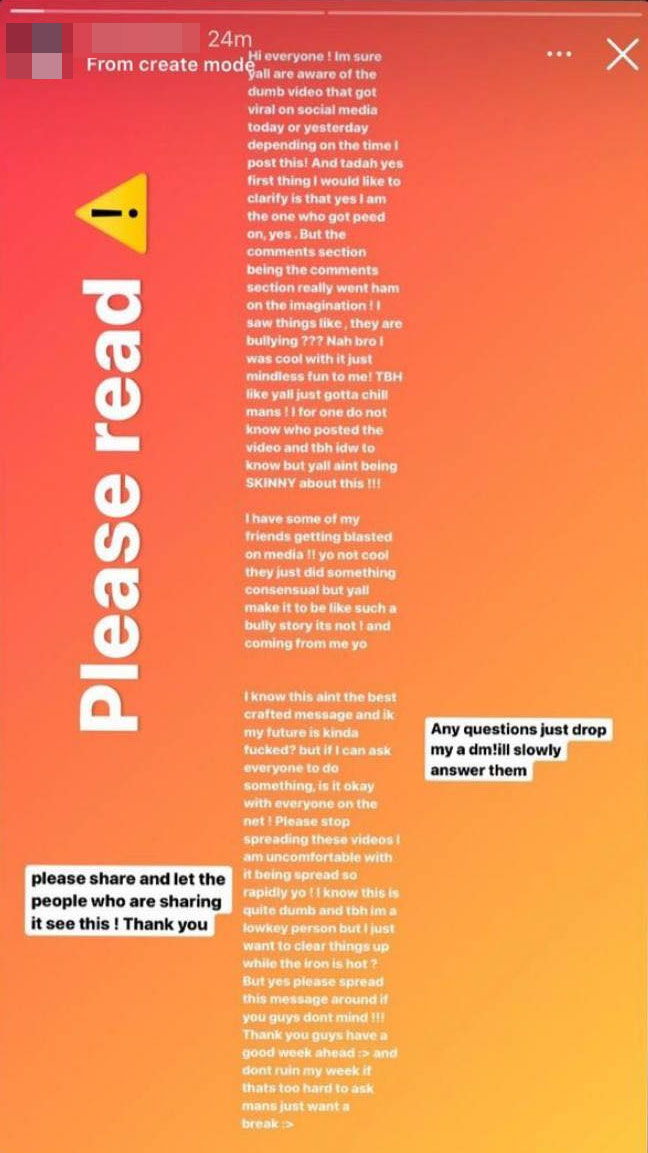 Some of the students involved are supposedly from the Ngee Ann Polytechnic Students' Union (NPSU).

The incident, which many commenters have speculated about online, likely took place during an orientation camp.

Some of the students in the videos have masks on, suggesting the incident took place some time within the past year.