The cool dog photographed in Singapore riding pillion on a motorcycle with his human had to do practice rides several months ago before hitting the road for real.

The dog, Buddy, shared on his Instagram account @buddylikescats on March 14 about how he deals with riding on a bike these days.

Me and pa on our first "real" ride out, to Bishan Park in August 2020! We did a few weeks of training before this - around the neighbourhood and estate so that paps could make sure I was super comfortable and confident on the bike, before stepping on the road. Boy and am I loving it 😍 Now he brings me everywhere and I get to go out every week with him

This post -- the first in 16 months on the account -- was likely put up in response to some concerns expressed about how a dog should not be riding pillion on the road.

Buddy, and his owner, were snapped together at a traffic stop along a road in Toa Payoh. The post said Buddy went from being "a homeless stray to being a cool furkid on a bike" after he was adopted.

He also spent a few years in a shelter.

He was found one day roaming the streets alone with no place to call home. He then later spent his years living in the shelter before finally getting adopted. ⁣

Now, not only does Buddy have a warm home to sleep in, he also goes on weekly adventures with his hooman.

In response to queries about where to find Buddy's gear of goggles and backpack, @buddylikescats responded: 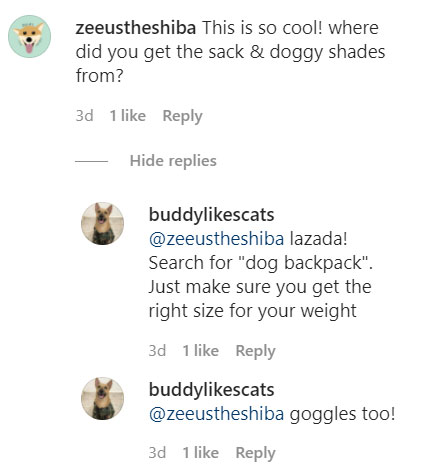