A severely malnourished and dehydrated female cat was found in Choa Chu Kang Crescent on March 9, 2021.

Her sudden appearance in the estate overnight and out of the blue led community cat feeders in the area to conclude this was a case of abandonment.

A seasoned cat rescuer was then alerted to save the cat. Details about the cat and its various ailments were put up on Facebook in a post by Feline.

In response to Mothership's queries, Feline, who is also known as Nasha, said she was alerted to rescue the cat and was distraught to find her in very poor condition.

"She's really a heartbreaking case," the 40-year-old woman who has been rescuing cats for 11 years said.

"I stood there and cried."

Nasha said three-year-old cat only weighed 1.8kg, which is the weight of a adolescent kitten, when found. 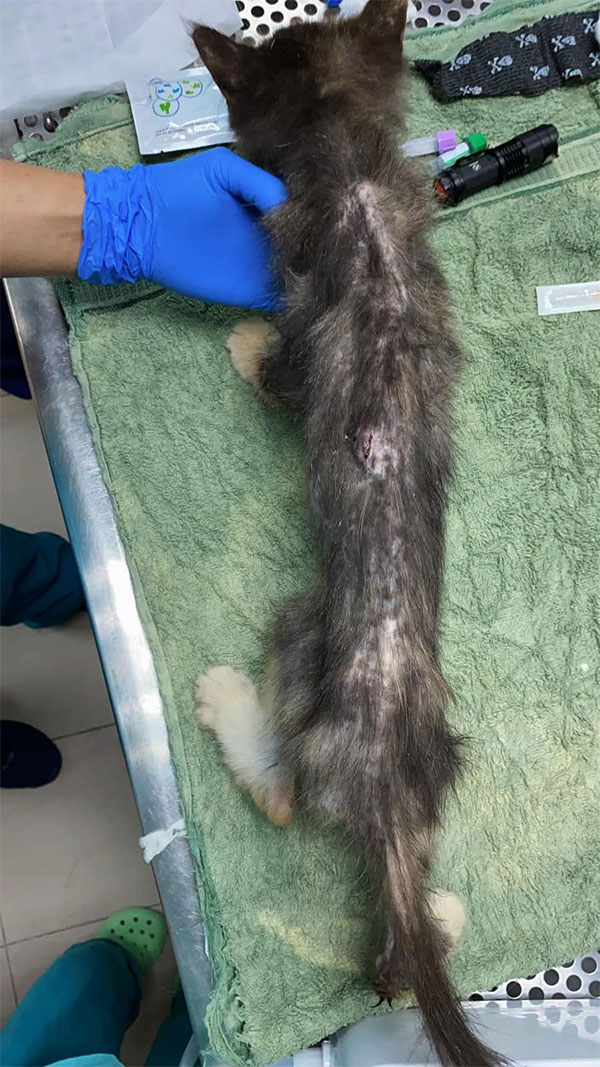 The cat rescuer was involved in rescuing a litter of eight cats found sealed in a box and dumped in the Chai Chee HDB estate.

After taking her in and bringing her to the vet, Nasha named the cat Sofiy Leia.

Nasha added that she suspects Sofiy Leia was used for breeding and dumped.

She said: "My first thought is she was abandoned by backyard breeders. I hope I’m wrong. I really hope so. She’s also unsterilised and has a swollen butt hole."

Sofiy Leia was found with severe ringworm with abscess all over her, according to Nasha.

The cat is still suffering from severe diarrhoea.

At the moment, Sofiy Leia is warded and is expected to remain so for the long term.

She has been started on anti-fungal medication.

Within a day, Sofiy Leia was doing better and has responded well to being taken care of, Nasha said in subsequent updates in the following days.

The cat also started eating on her own the next day after she was found.

Nasha wrote: "She's eating well so as long as her appetite remains good, her chances of full recovery will be quite good."

Nasha wrote: "Just look at this gorgeous girl. Sofiy Leia looks brighter and more confident today. She is very manja and gives no problem during medication. Such a sweet girl."

In total, Nasha has received S$900 in donations from two Good Samaritans who stepped forward to help foot part of Sofiy Leia's medical bill after learning about what happened.

The cost of taking care of Sofiy Leia is expected to be recurring.