Like many other rental blocks, its 10 floors are densely packed with 249 one- and two-room flats.

But if this group of volunteers has their way, Block 188 will soon stand out among all its peers, as the first HDB block to have block-wide WiFi internet access at broadband speeds.

Each household will have this access from their homes without even needing to get a router and modem set up, if the group —  from Engineering Good's "Building Digitally Inclusive Communities (BDIC)" project —  succeeds with their ambitious plan.

Instead, multiple access points, mounted in the common corridors, will create a WiFi network that covers all units in the block.

"I can do a lot with the savings"

Maria Tulkabtiah Binte Wari, 40, a resident of Block 188, is one of the keen supporters of the initiative. Being able to get internet access for S$3 per month will be quite significant to the mother of three, in terms of budgeting.

Currently, the family's monthly internet bill is around S$60.

23 per cent of households (or, nearly one in four) in Block 188 do not have internet access at home.

Those who do, like Maria's family, make provision for it in their household budgets.

"Whatever the situation, as a mother, I have to provide," she says.

For Maria and her family, the internet is used to connect with family members in Malaysia, through regular video calls, since visiting is temporarily out of the question.

Maria also uses educational videos and other free online learning materials with her children, sharing proudly that before reaching the age of two, her youngest child had learnt the alphabet, and could recognise colours, shapes, and numbers thanks to online content.

As a housewife, Maria says she has learnt a thing or two from online content too, and that she can "see from the internet how they do things," and has picked up better and more efficient methods of getting things done around the house.

It's also important for "family time", Maria says, sharing that the household streams movies to watch together.

One of the BDIC project leads, 29-year-old Francesca Wah, explains that the idea of providing free WiFi germinated in April 2020.

It was then, during the Circuit Breaker, that the need for internet access at home — something most Singaporeans take for granted — become glaringly obvious.

Wah, the founder of local non-profit Bringing Love to Every Single Soul (BLESS), which conducts activities such as reading programmes for children in rental flat communities, had been thinking about what could be done to "ensure that the lower-income [households] are digitally included."

Wah and her fiancé Jeremy Ong agreed to take on the role of project leads in BDIC after crossing paths with Johann Annuar — Engineering Good's Executive Director — and realising that both organisations share a common goal of digital inclusion for low-income families.

Wah explains that the BDIC project is targeting Block 188 because BLESS has been active in the area and is familiar with the residents in the block.

A number of families which BLESS worked with were beneficiaries under Engineering Good's "Computers Against Covid" initiative.

Back then, volunteers collected and refurbished laptops that had been donated by members of the public, before distributing them to needy families and individuals who needed them for Home-Based Learning when schools were closed.

And so, what's happening now with the free WiFi project builds on what was started during, and even before the Circuit Breaker.

An idea adapted from a very different context

A related initiative in Ang Mo Kio saw a HDB void deck getting equipped with WiFi in 2020.

Now, if BDIC succeeds, Block 188 will be the first block of rental flats to have block-wide internet access.

The idea for providing WiFi access to an entire block was actually borrowed from a very different context.

Ong came to learn that central coordination of WiFi services was actually practiced in some condominium complexes in Singapore.

"Yeah, so the idea came from [there] lah," says Wah. "You know, why not we use it for the lower income [households] instead?"

Ambitious as the WiFi project is, it is only part of the wider strategy of digital inclusion, which BDIC tackles in four areas, which they call the four "E"s.

First, they equip students with laptops, empowering them with digital literacy skills through workshops in schools — work that has been ongoing.

The WiFi project aims to enable access to the internet from home, and will be complemented by other programmes to elevate the IT capabilities within the communities by training youths to be able to troubleshoot issues and even fix laptops.

It's a comprehensive, coherent plan that — as Wah reiterates many times in our conversations — is geared toward sustainability.

With connectivity and digital readiness becoming more and more of a daily necessity, the impact of what the group is trying to do cannot be understated.

Wah says that BDIC is currently speaking to corporate sponsors who may potentially come on board to cover the initial set-up cost.

With that, the estimated cost of internet access for each household should work out to around S$3 each month, including equipment and maintenance, and it's likely that most of the households will be keen to sign up.

BDIC's survey of the households — conducted with help from the Boon Lay Youth Network — reveals that a clear majority of the residents are indeed keen on the WiFi project.

In fact, the low price means cost savings even for the households who are receiving government financial aid to help them get internet access at home.

But there are also other factors that will determine the success of the project, besides the attractiveness of its pricing.

A significant part of the project's success will depend on the receptiveness of the community.

The community will also be called upon to take care of the physical infrastructure, as well as to support each other in terms of technical help — with training of course.

Maria is confident that the community will be able to take care of the shared WiFi infrastructure, when it is installed.

She explains how the community came together to resolve an issue with the lifts in their block, back in 2019.

Back then, the lifts broke down often due to unknown obstructions in the lift shaft. No one knew which floor was causing the issue.

But thanks to what Maria calls a "moving internet" in the block — comprising kaypoh makciks such as herself — she was able to quickly communicate the news to neighbours, asking them to keep a look out.

Soon enough, it was discovered that three young children from one of the households were dropping stones into the lift shaft out of mischief.

The solution, Maria says, was for her to talk to them, patiently explaining that if anything was to happen to their mother that made her unable to take the stairs, they would not want the lift to be broken down.

"I will always give this kind of examples to make them think," says Maria.

Besides a good talking-to by Maria, one of the children's neighbours (whom Maria knows only as "Aunty") also offered to take the children into her house to keep them entertained while their parents were away.

Maria assures us that the tight-knit community in the block will be able to look out for the WiFi access points without much issue.

"We have cooperation with each other lah, between the neighbours. So if you guys install this [WiFi infrastructure], we will keep a look out for each other. Because it's a benefit for all of us, and so it's all of [our] responsibility."

The project reached a major milestone in Dec. 2020, with a successful on-site test.

The team had been eager to find out if their planned placement of the WiFi modems would be able to provide access to households from anywhere in their flats. I look on as Daniel Blueman, a volunteer with BDIC, mounts a WiFi modem to the ceiling, to run diagnostic tests. 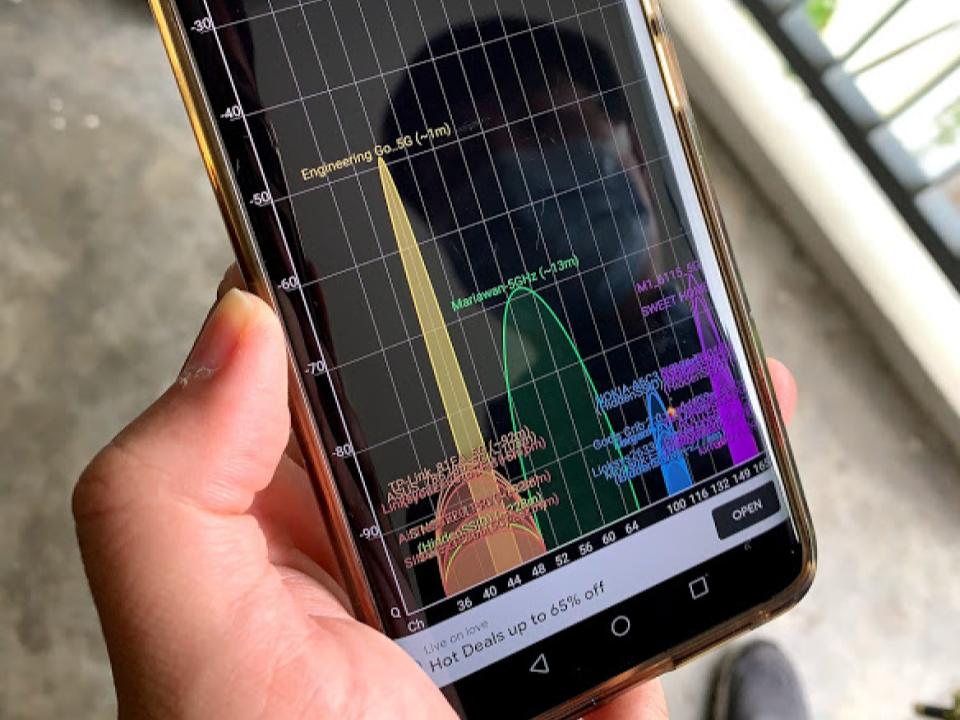 Aria Wenda, 34, another member of the BDIC team, pulls out his phone and opens an app which shows the signal strength of nearby WiFi networks.

He shows me the multicoloured shapes — representing the WiFi networks — that appear on the screen, nodding approvingly at the signal strength on the "Engineering Good" network. 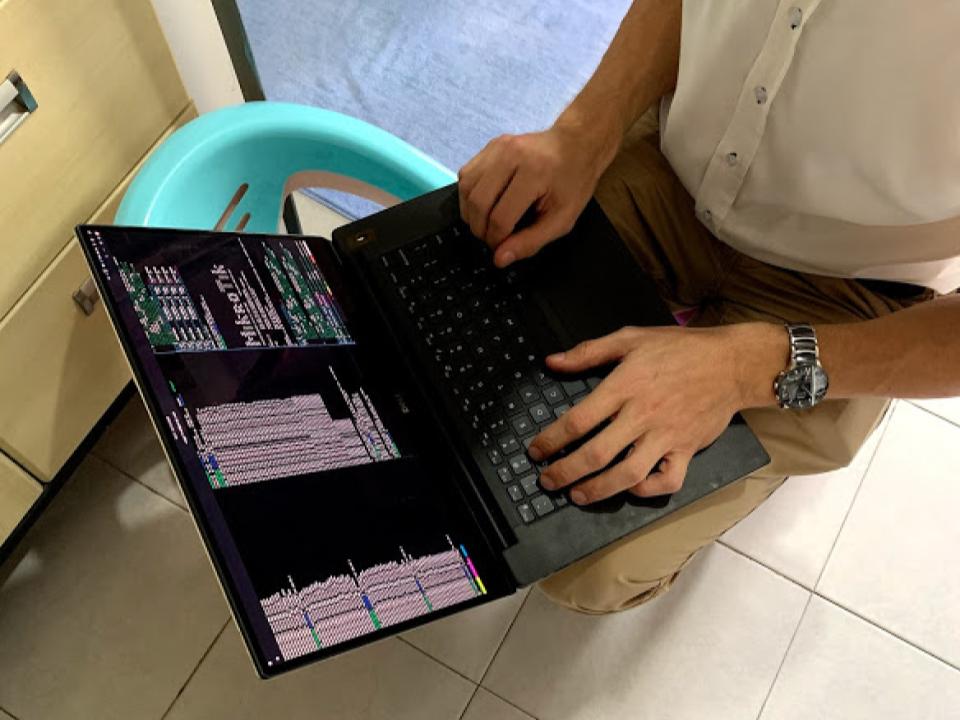 Blueman bustles around the house, checking the signal strength from different parts of the residence on his laptop.

The successful results from the tests mark a small, but important step in the process of refining their plan.

With the on-site test validating the technical specifications in the plan, the team has since submitted their proposal to the Housing and Development Board (HDB) and will be meeting to discuss the details soon.

The project is on track for launch within the year, and it would appear that momentum is building.

Once the pilot project in Block 188 is launched, the team aims to spend the next two years to devise a "steady-state plan" that can then be rolled out in other rental blocks as well.

As far as they've come, it looks like the team is only just getting started.

If you'd like to support Building Digitally Inclusive Communities, you can make a donation on Engineering Good's website here.