From its preliminary investigations, the ministry said that it cannot exclude that transmissions could have occurred at the hotel.

As a precautionary measure, Crowne Plaza Changi Airport will be closed for 14 days from Jan. 8 to Jan. 21.

Foreign air crew and guests currently staying at the hotel will be checked out progressively.

Incoming air crew will be housed in alternative facilities. Restaurant and event spaces within the hotel will also be closed.

During its closure, deep cleaning and disinfection will be carried out by the hotel, in consultation with MOH and the National Environment Agency (NEA).

There are 2 cases in the community, both of which are currently unlinked.

Case 59059 is a 43-year-old female Malaysian, who is a Work Permit holder who works at Azur at Crowne Plaza Changi Airport (75 Airport Boulevard).

Her job entails delivering pre-packed meals to air crew and hotel guests. She does not interact with diners at Azur.

She developed symptoms while at work on Jan. 3 and sought medical treatment at a general practitioner clinic on Jan. 5, where she was tested for Covid-19.

Her result came back positive for Covid-19 infection the next day, and she was conveyed in an ambulance to the National Centre for Infectious Diseases (NCID).

Her serological test result has come back negative, indicating that this is likely a current infection.

Preliminary investigations reveal that she is probably not infected with the B117 strain, which was first identified in the UK. Her earlier tests from Rostered Routine Testing (RRT) – the last being on Dec. 31 – had been negative for Covid-19 infection.

Case 59069 is a 63-year-old male Singaporean who works as a cargo operator at AirMark Aviation (S) Pte Ltd, and is based at Dnata Cargo Centre (45 Airport Cargo Road).

He mainly handles loading and unloading of cargo for My Indo Airlines, and does not interact with flight passengers.

He developed acute respiratory infection symptoms on Jan. 4, and sought treatment at Changi General Hospital on Jan. 6. He was confirmed to be positive for Covid-19 infection on the same day, and was warded.

His serological test result is pending. Prior to hospitalisation, he had gone to work after the onset of his symptoms.

In the meantime, all the identified close contacts of the cases, including their family members and co-workers, have been isolated and placed on quarantine. They will be tested at the start and end of their quarantine period in order to detect asymptomatic cases.

31 of the cases announced on Jan. 7 are imported.

30 of the cases — all except for Case 59042 — had been placed on SHN upon arrival in Singapore and were tested while serving SHN.

Case 59042 arrived from Bangladesh on Dec. 22 but could not clear immigration due to incomplete documentation. He was held at a facility located at the airport’s transit area until Dec. 24, when the issues were resolved, and was subsequently conveyed to a dedicated SHN facility. 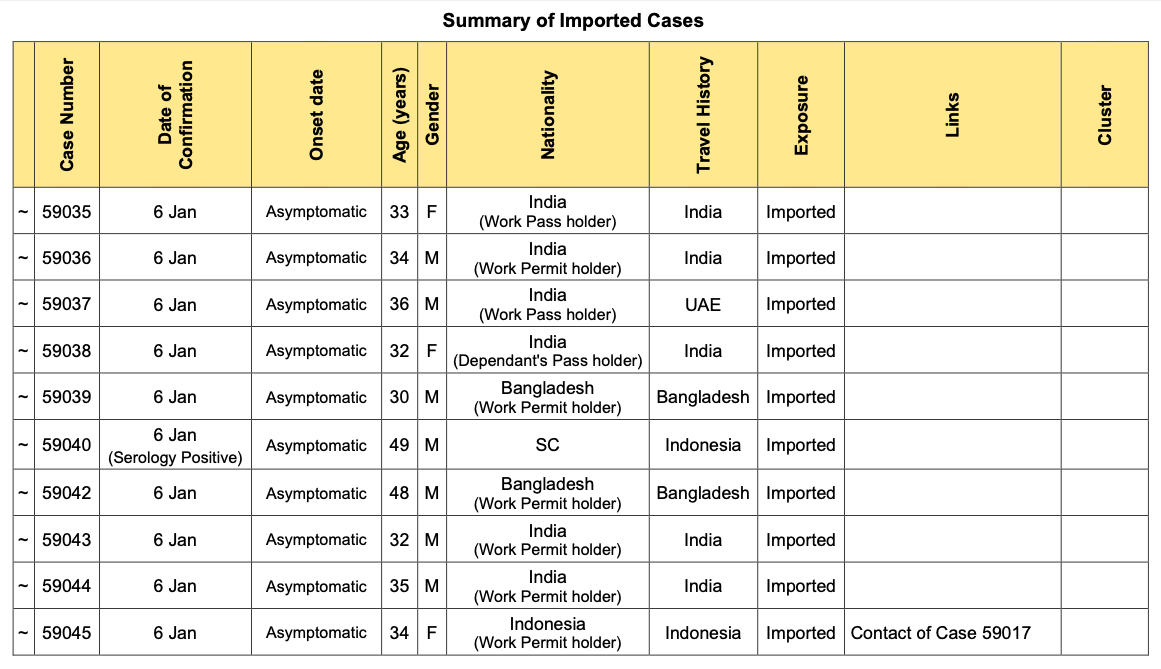 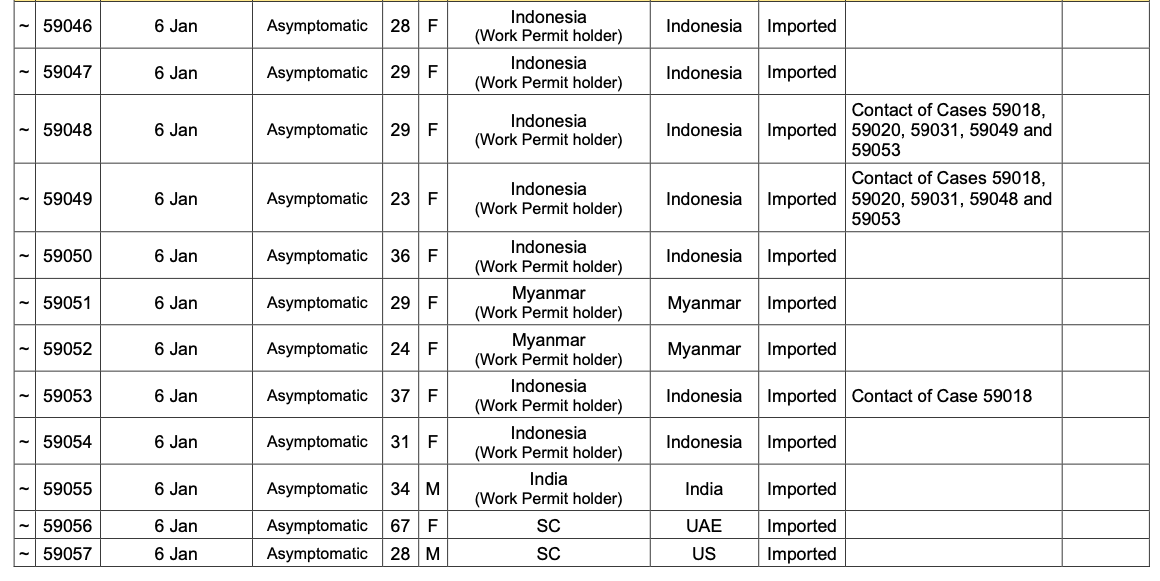 There are currently 61 confirmed cases who are still in the hospital, most of whom are stable or improving.

One is in critical condition in the intensive care unit (ICU).

161 cases who have mild symptoms or who are clinically well but still test positive for Covid-19 are isolated and cared for at community facilities.

Three new locations were added to the list on Jan. 7:

Here is the full list of locations visited by cases in the community during their infectious period in the past 14 days, as of Jan. 7: