A man in Singapore surprised himself after he successfully resold on Carousell a discarded PS5 box he picked up from the common trash area under a HDB block.

The best part? He did it as a joke initially.

The man, Leslie Koh, took to Facebook on Dec. 19 to share about his little rag-and-bone coup he pulled off.

The short post said Koh had initially spotted the empty but "pristine" PS5 box that was thrown away, and he thought the piece of trash would make for a nice prank this Christmas season.

So for the fun of it, I brought it back home, took photos and posted on Carousell.

"Within a day, I received a message that someone was interested but I was skeptical. After all, Carousell can be #CarouHELL at times, right?

And then it happened guys.

Although not mentioned, the PS5 prank originated some time back in November.

Instagram had at that time launched a filter that allowed its users to superimpose a PS5 image on their photos to make others believe one had already bought the in-demand device as it was being launched to high expectations.

Koh's quick-thinking led to him listing the empty box on Carousell on Dec. 17. 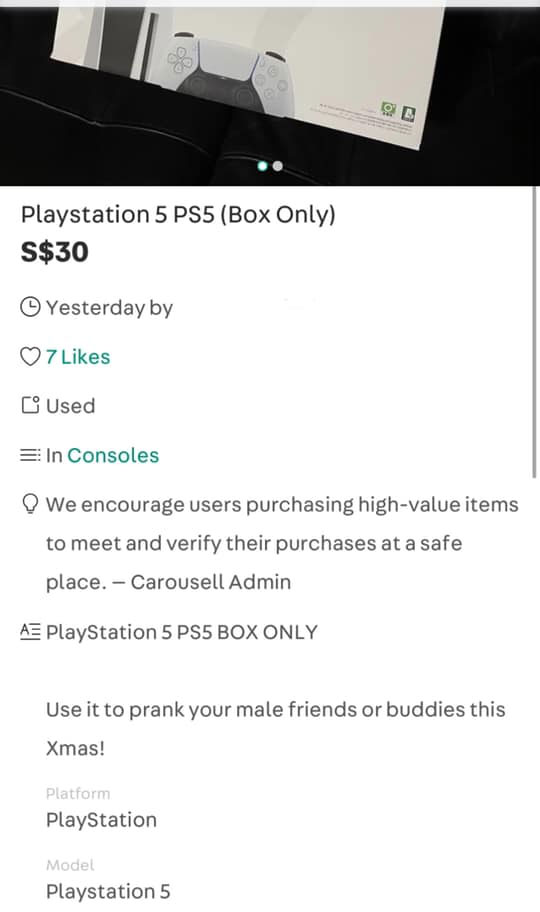 And it wasn't long before someone responded.

Lo and behold, there was actually interest in the empty box.

Accompanying the post was a screen shot of the conversation with the interested party, who really turned out to be a genuine buyer.

Moral of the story

Koh ended his post with a moral to his little exploit.

He wrote: "Opportunities are everything, you just need to keep your eyes open."

He also said if you "never try", you will "never know".

However, he also warned that there is a possibility that someone this Christmas is going to be pranked into believing he or she is getting a PS5 for real.

All photos via Leslie Koh