A 73-year-old woman was hit in the face by a 2.5kg packet of uncooked rice that fell from the shelf of a FairPrice supermarket where she was grocery shopping.

The incident occurred about a month ago on Sep. 21, but a Facebook post regarding what happened was put up by the woman, Shirley Chua, on Oct. 13.

Reached out for a packet of rice

According to the shopper's post, Chua tried to reach for a packet of rice that was located on a high shelf.

But just as she took one packet down, three packets fell off the shelf towards her.

One of those packets of rice then hit her face.

In her post, Chua wrote about her experience colloquially: "I just want to take the rice, 3 packet fall down 1 packet hit my face n 3 fall to the floor. I faster rub my face is pain."

According to a photo she shared, the rice that fell on her was a 2.5kg packet of FairPrice Thai Red Unpolished Rice that cost S$9.80. 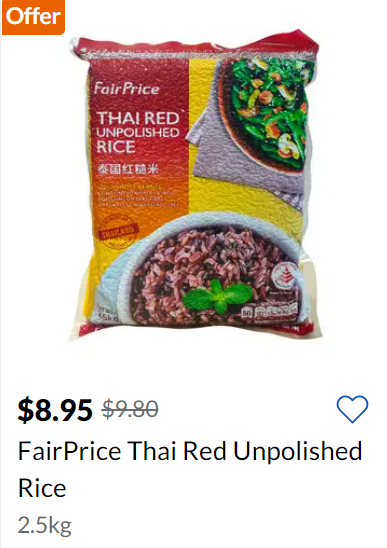 Chua said she proceeded to pay for her purchase but did not inform the supermarket staff about what happened as she had already bought her dinner and wanted to make her way home fast.

She said she saw a 2cm mark on her face when she checked out her injury at home.

Chua said she went back to the supermarket the next day to inform the staff about what happened.

However, the way the rice was arranged on the shelf was still unchanged after a few visits to the supermarket, Chua said.

She wrote in her post that this made her angry: "Went there many times they still put the same. Ask them WHY?? they say is the rice company job. I really very angry. This NTUC got no manager. I post here hope NTUC can see n take action.🤨🤞😣"

In response to a media queries, FairPrice said it has contacted Chua to express concern for her well-being.

"We have also explained to her that the small quantity rice packets are placed in the manner she described to allow easier access for customers," FairPrice said.

"Stacking the rice packets - one on top of another - would make it difficult to reach since this is on a higher shelf."

FairPrice said Chua has been advised to approach staff for help if she needs help obtaining certain products beyond her reach.

FairPrice added: "Nonetheless, we have noted her feedback and we will review how the product is placed."

"Customer safety remains a priority at our stores and we urge customers to approach our staff if they require any assistance."