United States President Donald Trump announced on Twitter on Oct. 2, 2020 that he and the First Lady, Melania Trump, have contracted Covid-19.

Tonight, @FLOTUS and I tested positive for COVID-19. We will begin our quarantine and recovery process immediately. We will get through this TOGETHER!

News of the two first people contracting the disease amid the presidential campaign spread like wildfire, 33 days before the U.S. election on Nov. 3.

Some netizens on Chinese social media platform Weibo mocked Trump for catching the virus, with #TrumpContractedCoronavirus (in Mandarin) trending on the platform.

A number of users "hoped" for the virus to "quickly conquer" Trump.

Some even called it a "National Day Gift", as it was the 71th anniversary of the founding of the People's Republic of China on Oct. 1. Translation: "A gift presented for our national day celebration."

Translation: "Giving us a gift for our national day celebration? Hope there's something wrong with him."

Some netizens mockingly recommended Trump try bleach, in reference to Trump's bizarre suggestion for Covid-19 patients to receive injections of disinfectant to cure them of the disease. Translation: "It's time to witness a miracle, better quickly try it!"

Another netizen shared a meme of Trump latched to a bottle of bleach at a hospital. Some netizens shared sympathy for Trump

However, a few Weibo users criticised netizens who were mocking Trump, saying that they shouldn't be celebrating others' woes. Translation: "Be kind to others and others will repay you with kindness. We shouldn't be absorbed in celebrating Trump contracting Covid-19. In Fu Ying's (former vice foreign minister of China) words, there will be a better future only when China and America can coexist peacefully." 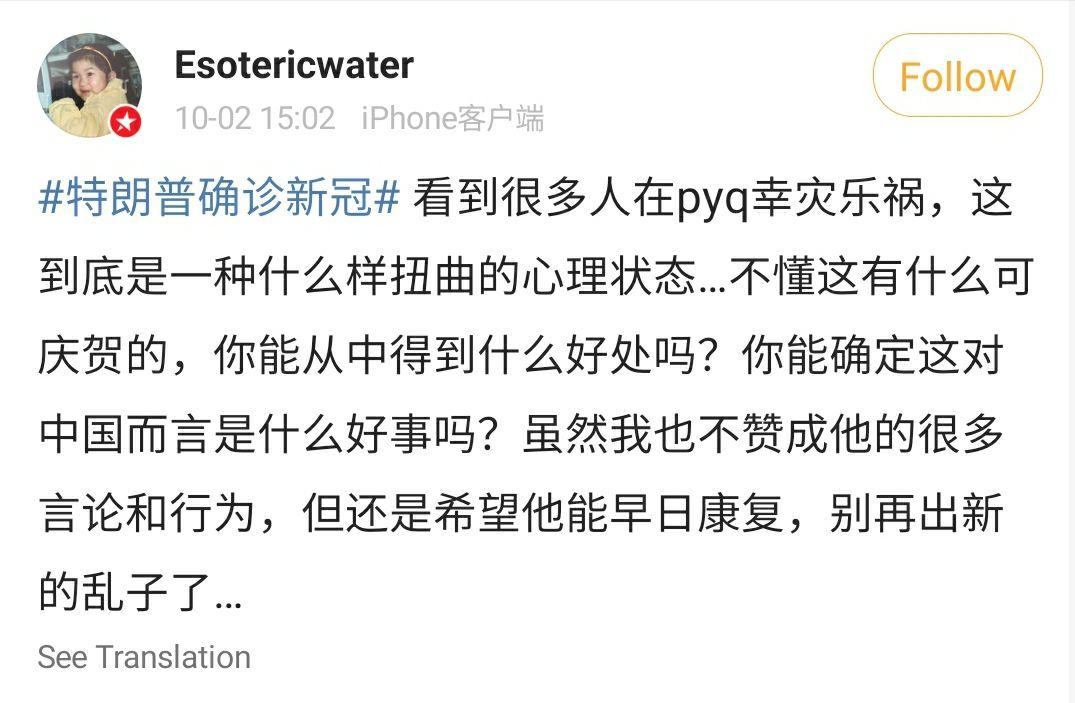 Translation: I see a lot of people on my social media celebrating over Trump contracting Covid-19. What kind of twisted attitude is this? What's there to celebrate, can you obtain any benefit from this? Are you sure this is a good thing for China? Of course, Trump has done a lot of things that I don't agree with, but I still hope that he can get well soon, and stop pulling new antics..."

One Weibo user mentioned that this development could turn out to help Trump gain more supporters, and that it was likely for him to be cured of Covid-19 as well. Translation: Everyone's seem to have gone crazy over this piece of news even when the current recovery rate for Covid-19 is so high. Moreover, people naturally root for those who seem weaker -- this could turn out to become a boon for Trump. Also, the British prime minister was also cured. Who's to say that Trump wouldn't be cured? Ultimately, it's better for China that Trump gets re-elected, anyone else would be worse!"

A few days before Trump's announcement, the U.S. had its first presidential debate of 2020, between Trump and Democratic Party candidate Joe Biden.

However, the debate mostly turned into a 90-minute shouting match between the two.

At one point, a slightly exasperated Biden even said, "Will you shut up, man?", after being interrupted by Trump.

According to South China Morning Post, a Weibo user had questioned, "Is this American-style civilisation?"

The debate became a target for mockery by netizens on Weibo.

One commented that they would "feel desperate" if they were an American.

"Overall, it was messy and one of the worst presidential debates in many years. There’s no winner in this debate, as it failed to live up to the expectations of the people around the world with respect to the US as one of the most developed democracies," Gu Su, a political scientist at Nanjing University said.