Since then, several other people have stepped forward with similar encounters with the 32-year-old.

In addition, accusations of cyber-bullying have also been thrown into the mix, with influencer Preetipls being one of the figures calling out the YouTuber.

The influencer said that Dee Kosh has "abused his power for way too long".

TW: DEEKOSH. This is NOT about the several sexual harassment allegations against him, this is me sharing an example of how the dude has abused his power for way too long. This happened in December 2018. (PART 1) pic.twitter.com/QdE0Cx50UR

Her three-part thread detailed an incident with Dee Kosh in December 2018.

The conflict started when Preeti's brother, Subhas, censured Dee Kosh for "making a mockery" of the Indian accent.

Dee Kosh then implied that he would end the siblings' career, according to Preeti.

In a subsequent WhatsApp exchange between Preeti and Dee Kosh, the YouTuber said that Preeti would be "collateral damage" should he choose to destroy Subhas. 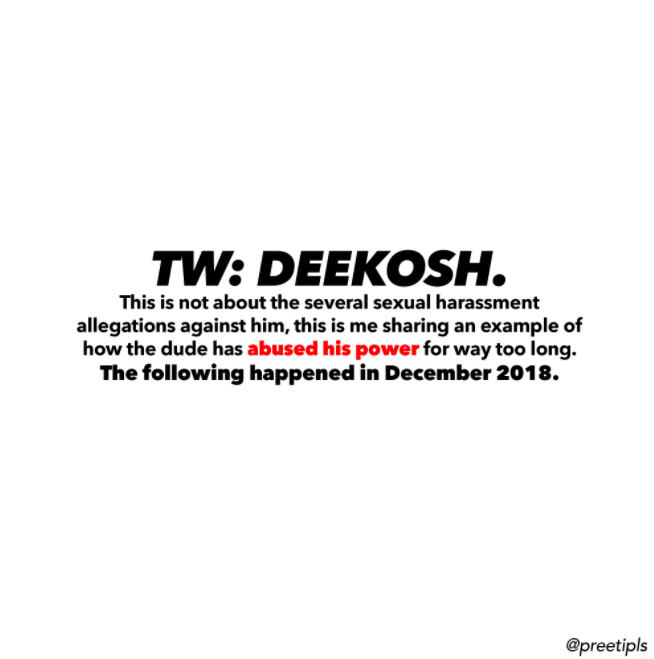 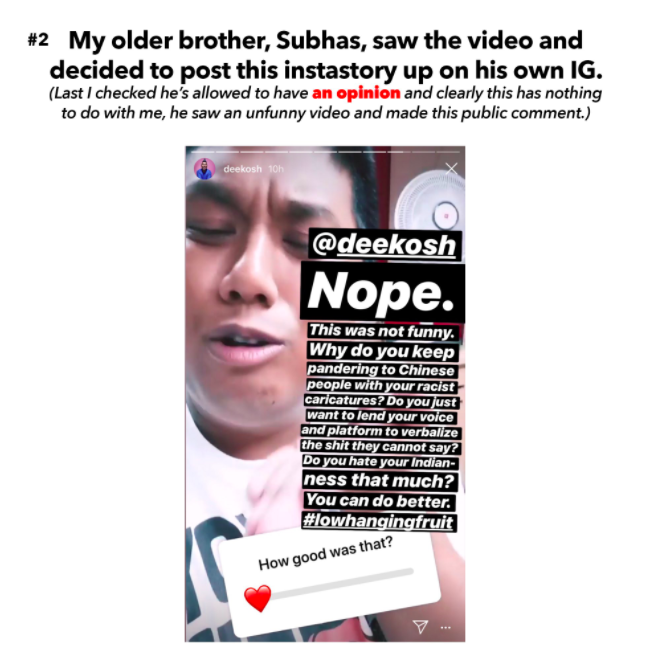 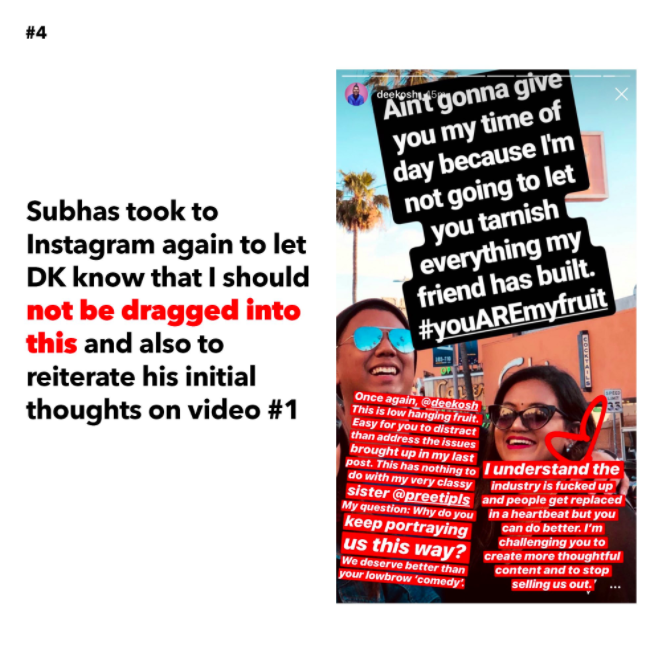 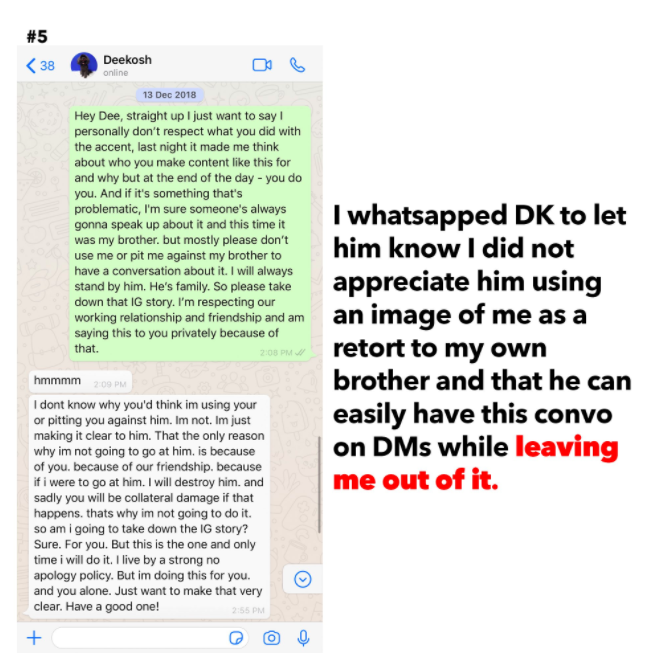 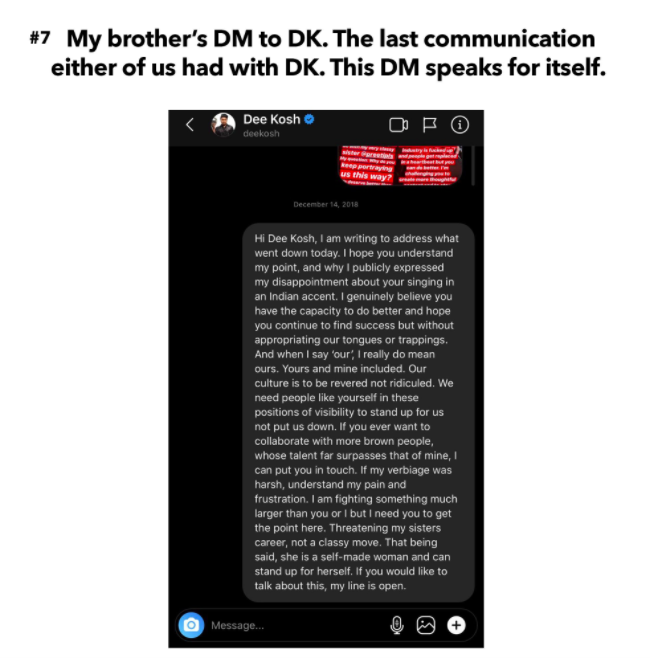 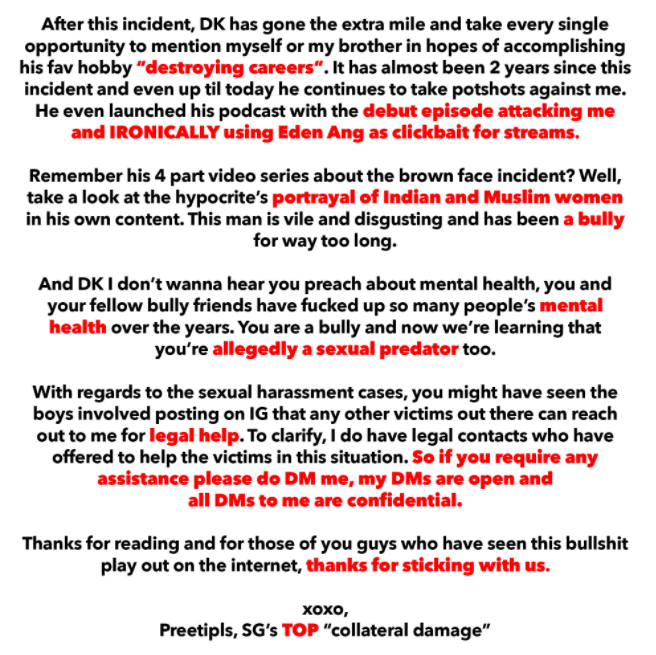 In the podcast episode that Preeti was referring to, Dee Kosh had spent a couple of minutes making snide remarks about her, and bringing up her rap video.

Why is Preetipls speaking up now?

Preeti later clarified why she only spoke up about it now, instead of back in 2018.

In the early hours of Aug. 21, however, Preeti updated that her Instagram post had been removed by the page.

lol so my post about deekosh’s threats and bullying got removed for hate speech. cc: @instagram pic.twitter.com/s6NlL3fuJF

me looking at how @instagram refused to remove my image from x*ax*e’s profile of her body shaming me but watching them remove my post speaking up bout deek*sh threats. cool cool cool. 📸: @harpersbazaarsg

An earlier post uploaded about a week ago also referenced the ongoing saga:

which pic should I use for the upcoming job application to power 98? hahaha jk I got my own podcast now #CHAIMEBITCH 😚 📸: August 2020 issue of @harpersbazaarsg🖤

Preeti's post on Dee Kosh has not been reinstated at time of writing.

Mothership has reached out to Dee Kosh and will update this article when he replies.