It's a balmy Sunday afternoon and the Jalan Besar Sport Centre, usually filled with the sounds of swimming pool-goers, is unnaturally still.

The stadium is also devoid of life, save for a small executive suite in the stands.

The space, filled with a veritable supply of used laptops and their accompanying parts, is quite aptly named the Salvage Garden.

Here, a group of men and women work furiously on a pile of laptops (called The Pile, of course), sorting them and evaluating their tech specs.

Is it fast enough? Does it have enough capacity? Is it missing a part? And most importantly, can it be fixed?

If can't, the laptop is sent to a corner where its organs — its RAM, hard drive, WiFi cards, and batteries — are harvested for other laptops that need them.

Requests for laptops started pouring in because of Home-Based Learning

"Tons of people have spare laptops at home. They don't know what to do with it or they have small issues like it hangs, or it's just slow and stuff," says Johann Annuar, Executive Director of tech-based non-profit Engineering Good.

This entire operation is Engineering Good's Computers Against Covid, an initiative which puts refurbished laptops in the hands of needy families and individuals who need them for Home-Based Learning.

Demand for laptops exploded after the Education Ministry implemented Home-Based Learning across the board for all students starting April 8.

These laptops are donated by members of the public and undergo a refurbishment process by a 160 strong team of volunteers.

"What we set out to do is to make sure that the kids have tools to learn...because we don't want these kids to be losing out just because they don't have these simple tools that everybody has — people have spare laptops!"

"I think that there is a problem when you live in a world where the are simultaneous epidemics of obesity and hunger," 46-year-old Johann says,

Anyone who lives beyond themselves should aim to make things a bit more equitable in the world, he adds.

And that is what this project strives to do, to make the playing field a little more equitable for needy kids.

"If they ask us for laptops, it means they need them. One way or another, we give it to them," says Johann.

Those who ask for a laptop get a laptop, no questions asked.

Of course, this means that the system is open to abuse. Someone, for instance, might get a laptop and sell it on Carousell.

"If they need to sell [our laptop] because they need the money (shrugs), we're still helping people," he says.

Gave out over 1,200 refurbished laptops

To date, 90 beneficiaries (including family service centres, charities, children's homes and even schools) have received more than 1,300 laptops  refurbished laptops from Engineering Good.

It's a surprising number for Johann simply because he did not expect the initiative to balloon to this extend.

"I honestly thought we'd do like two dozen and that's it," he says sheepishly.

But the numbers kept coming in — more volunteers, more donors, and even more requests — and the movement gained momentum.

"So for the first four weeks, I went home at 1am, 2am every day," adds Johann.

The team soon realised that the small Henderson office that they were working out of then was not big enough to cope with the increased requests and manpower.

Aside from moving to a bigger space at Jalan Besar Sport Centre, the team reorganised itself so that most of its laptop technicians can refurbish laptops from home.

The process of refurbishing laptops

So, after a laptop leaves its donor, it is sent to Engineering Good's network of home-based laptop technicians.

The technician wipes the laptop, check that the WiFi is working, and installs relevant software like Google Chrome, Adobe Acrobat Reader, and Zoom. 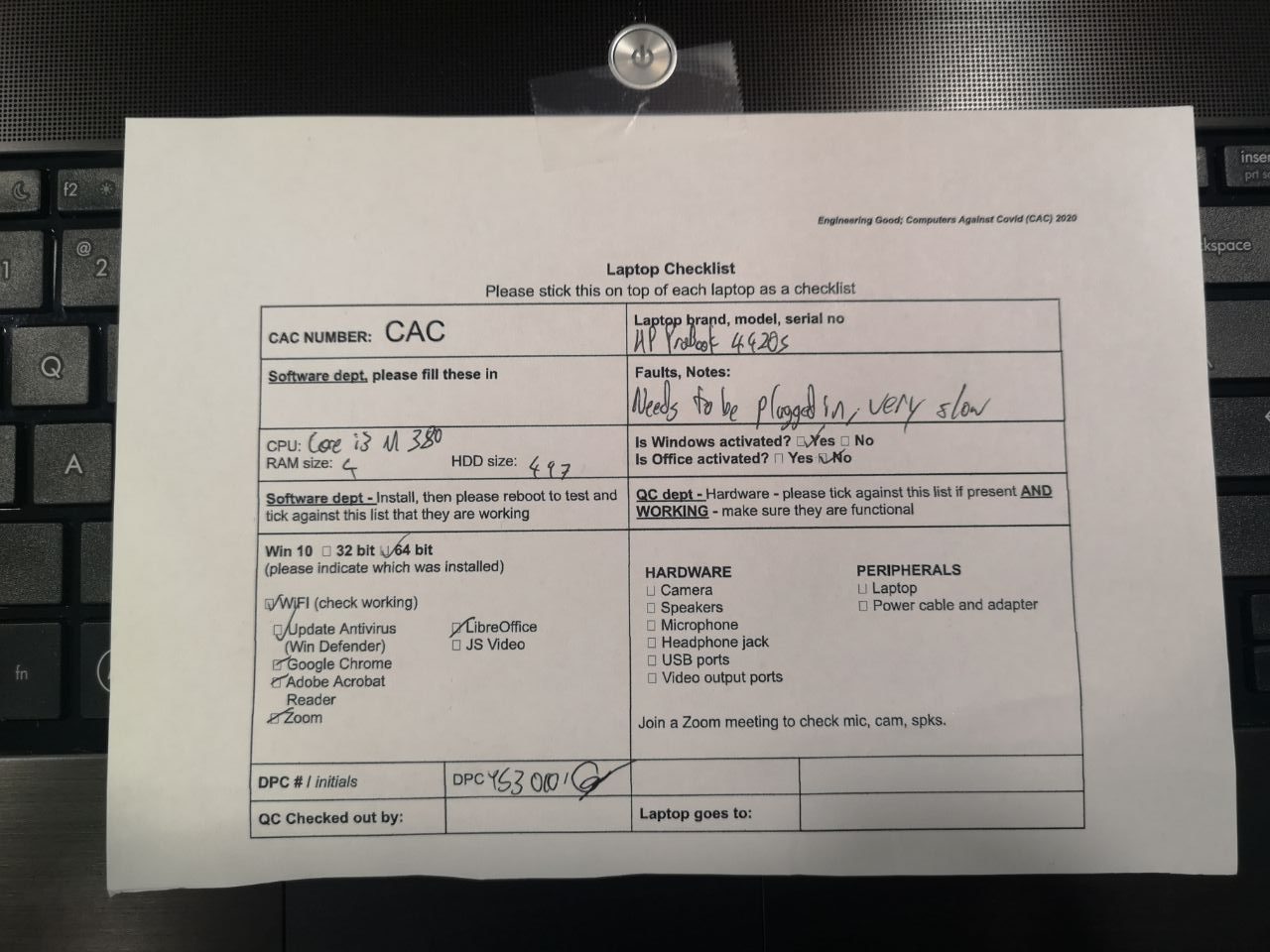 It is then sent back to the Quality Control team at Jalan Besar Sport Centre who makes sure that the hardware — camera, headphone jack, USB ports — are working.

Then off it gets bundled with other working laptops to be sent to beneficiaries.

"Sometimes the laptop gets stuck at boot...or the RAM is faulty or the hard drive is faulty, we have to switch it out. So yeah, a lot can go wrong here," says Johann.

That's where the Salvage Garden, an abundant oasis of spare parts, comes in.

"People drop off a lot of crap"

No doubt, the effort of Engineering Good is nothing without generous donors (One donor purchased 450 laptops for the cause).

And while it has received over 2,700 laptops within a month, the team has also received some other equipment.

People drop off a lot of crap, says Johann.

Yellow printers that were once white, tons of routers, and even a 1996 Toshiba Satellite Pro which looks more at home in a museum.

People even donated phones and tablets which really aren't suitable for Home-Based Learning (and which the team did not asked for).

"People somehow treat us as a junkyard," says Johann, adding that the team has discarded about 25 per cent of what they took in.

For this reason, the team has stopped accepting drop offs from donors. Instead, the team picks up laptops from donors and will politely decline those that cannot be refurbished.

"Means that we work on laptops that can be salvaged instead of salvaging laptops."

Having said that, most of the laptops that they get just need to be refreshed with an updated OS and they're ready to go.

One of the better models the team has received is the clunky Lenovo ThinkPad, favoured by business corporations.

Others are in such good condition that the team simply cannot fathom why they would be given away.

"There's absolutely no reason you want to throw them away unless you're f**king rich and buy a laptop every year," he laughs, pointing out a brand new 2019 Asus sitting in the corner.

Another donor gave away a huge Acer touchscreen monster of a desktop which, of course, cannot be given away as a laptop. The team now uses it for their operations.

Helping others bridge the digital divide

One month on, the requests for laptops are still coming in.

However, they're no longer as urgent and they're coming from people who aren't students — migrant workers and seniors who want to learn how to use technology.

And then there are those on the other side of the digital divide — people who have never lived life with the internet or computers or phones.

It is a gap that Johann and his team envision filling, by providing hardware like laptops and tablets, or perhaps teaching others how to fix computers and set up their WiFi.

Johann hopes that he can start this once the Computers Against Covid initiative stops on June 1 — the end of the Circuit Breaker.

"We want to transmute into something more sustainable to bridge the digital divide."