Without the same restrictions as humans, various animals have been spotted exploring our "City in Nature" during the Circuit Breaker period.

This includes the Zouk otters exploring different parts of Singapore, a white horse caught galloping down the road, and even a king cobra near Marsiling MRT station.

One species that has been spotted out and about most recently is our native long-tailed macaques.

These monkeys are highly adaptable and not shy of humans so they are sometimes spotted in urban areas.

In the past two weeks, a pair of macaques have been spotted at Jurong West, where several members of the public highlighted that they have not been spotted before.

In a post by Albert Tan Chee Keong, Tan highlighted in the caption that it was his first time seeing the macaques during his morning run.

Another Facebook user, Joseph Gerad Varughese, also echoed that it was his first time seeing a monkey in the area.Besides hanging out by the roadside, the macaques were also spotted in the residential estate at Jurong West Street 65.

In another post by Acap Mikael, the two macaques were seen just minding their own business while people walked by in the background.

Last Saturday (May 16), a resident Chia Ming Ho also spotted a macaque at the playground for the first time.

Speaking to Mothership, Chia said that he could not tell the gender of the macaque and he did not observe any feeding of the macaque.

However, Chia observed that a boy tried to disturb the animal but was later chased by the macaque.

Chia said that the appearance of macaque had drawn a sizeable crowd of 20 onlookers at one point to watch or take photos of the special visitor.

Possible feeding of the macaques in Jurong West

Anbarasi Boopal, who is Deputy Chief Executive at Acres, told Mothership that it is not unusual for these monkeys to be spotted in urban areas as they move from one green space to another, as large green spaces including reserves and large parks, are separated or fragmented.

They are however concerned about the interaction between the residents and the wild animals.

Boopal told Mothership that a member of the public reported to the team that people fed the macaques bread. 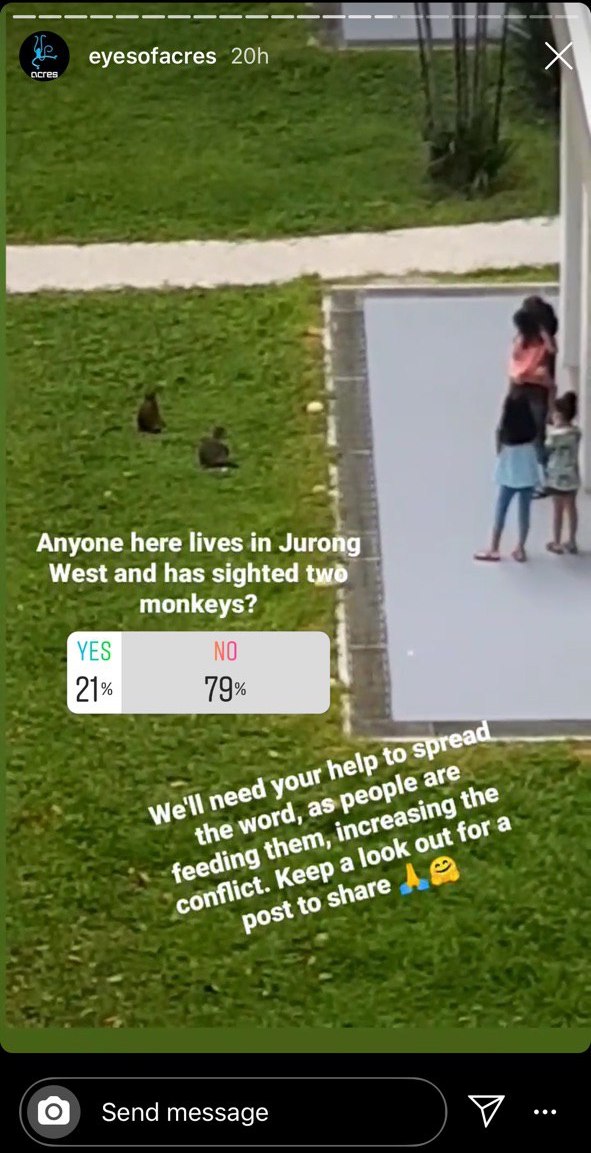 Acres: Please do not feed wildlife

To reduce the possibility of human-wildlife conflict between macaques and humans, Acres advises the public not to feed monkeys, or leave food accessible.

It is important to abide by these guidelines as it only takes one or two feeders to affect the harmony between humans and wildlife.

Macaques are able to find their own food in the wild.

As these wild monkeys occasionally pass through urban areas while moving between green spaces, feeding will alter their behaviours as the provision of food will entice them to stay in the residential area.

Feeding them will also make them less hesitant to approach people, increasing the likelihood of conflicts.

In 2017, a macaque was captured and relocated as this fellow got too brazen after being conditioned by inappropriate interaction with the wild animal:

A similar incident had happened in Punggol as well:

What to do if you see a macaque

Here's an infographic from Acres on what to do if you spot a monkey in your estate: