A recent online fiasco saw Thais engage in a war of words with Chinese netizens after the latter vowed to boycott a popular Thai drama.

Subsequently the Chinese Embassy in Thailand stepped in to issue a response.

The heated exchange between netizens of both countries after the Thai drama lead actor's girlfriend retweeted a tweet that Chinese Twitter users deemed extremely offensive.

The cyber conflict between Thai and Chinese social media users over the weekend then revolved around the sovereignty of Taiwan and Hong Kong.

While the Thais insisted that the two Chinese entities are separate from China, the Chinese defended the official Beijing stance on the matter, saying both Taiwan and Hong Kong are territories inalienable from China.

In a lengthy statement in three languages -- Chinese, English and Thai -- posted on its Facebook page on Wednesday evening, April 15, the Chinese embassy defended China's position, saying the One China principle is irrefutable.

The One China policy refers to the tacit agreement between the People's Republic of China and the Kuomintang in Taiwan that there is only "one China", with both sides interpreting what it means differently.

The Democratic Progressive Party under Taiwanese President Tsai Ing-wen, however, has yet to reaffirm the consensus, fueling tensions with Beijing as a result.

Chinese embassy: China and Thailand are one family

In addition, it said the long-standing principle is recognised and supported by both the Thai government and the Thai general public.

Referring to the claims made by Thai Twitter users as "recent online noises", the embassy said they "reflect bias and ignorance of its maker".

It also said "the scheme by some particular people to manipulate the issue for the purpose of inflaming and sabotaging the friendship between the Chinese and Thai people will not succeed".

The embassy also reiterated the good relations between China and Taiwan, saying the "kinship of China and Thailand as one family will emerge stronger with more vitality" after both countries jointly overcome the Covid-19 challenge that "respects no borders".

Many Thai commenters had in turn scoffed at the Chinese embassy for suggesting that Thailand and China are a family.

They also rejected the claim that the general public in Thailand supports the One China Principle.

Some others proceeded to troll the embassy -- not unlike what they did to Chinese social media users previously.

For instance, one commenter said Thailand loves Taiwan, a pointed remark made in response to the embassy's reminder that Thailand and China have enjoyed long-standing friendship since ancient times.

Other commenters were unhappy that China is seemingly telling the Thais what to think or believe in.

"I'm confused. Why can't you make a polite statement instead of a threat. That's so cool of you. Whatever you may believe there, however powerful you are in your own country, to look down and force One China ideology down the world's throat...you need to step up and do better.

I respect you, but I don't support the principle.

It's a domestic issue. Why did you let your ppl use VPN to break the firewall and come at (attack people in) other countries. And this statement makes it sound like we're wrong for not bearing with the insults. Wow, so I'm the bad guy here. I haven't even stepped my foot onto Weibo. Why blame me?"

A commenter, however, said that while he hates the "behaviour" of the Chinese Communist Party and its principles, he does not hate the Chinese people.

Thais call out Chinese actions in the Mekong

One of the most up-voted comments called out Chinese actions in the Mekong river.

Because of a series of dams China built in the Mekong, a huge volume of water has been held back in China from other countries that share the river, such as Thailand.

"So P'China (P refers to older sibling) please release the water from the dam at the upstream for your Nong Thai (nong refers to younger sibling), Nong and the rest of your family, as well as the downstream are about to die of drought."

"If China and Thailand are a family, why didn't China look at its family when building the dams in the Mekong River?"

And a Thai netizen simply repeated a list of topics that are deemed politically sensitive by the Chinese government, such as the the persecution and imprisonment of Chinese political activist and Nobel Peace Prize laureate Liu Xiaobo.

The Taiwanese went to the page too to express their support for and friendship with the Thais.

The Chinese comment read: "I support the One China Principle too! One China, one Taiwan!"

The Chinese embassy attempted to take on the criticisms it received as well, even though it is rare for them to do so.

When a commenter proclaimed there is "one China, one Taiwan, one Hong Kong", the Chinese Embassy in Thailand proceeded to engage him by saying it was "sorry" to read such a comment as it "shows nothing" but the commenter's "bias and ignorance".

The commenter showed "disrespect to a sovereign country and betrayal to history as well", the embassy added.

To which another commenter replied with a simple GIF of the infamous Tank Man back in 1989 when the Tiananmen Square Incident occurred.

All words related to the incident, or massacre as some call it, have been censored on the Chinese intranet.

In one of the rare times the Chinese government publicly talked about the events that day, Chinese Defence Minister Wei Fenghe defended the decision, saying on the incident's 30th anniversary that the policy was "correct" as it was necessary for the country's stability.

Taiwanese President Tsai Ing-wen took to Twitter as well to wish "all Thai friends in Taiwan" a Happy Songkran Day -- the traditional new year for Thais.

For instance, a user posted a picture of three men holding different varieties of milk tea from Thailand, Taiwan and Hong Kong, and celebrating together with the drinks.

Thai Twitter users have used milk tea as a symbol to express solidarity with Taiwan and Hong Kong.

The drink was most likely chosen for all three places are known for their milk tea, whereas China does not appear to have its own variety of milk tea.

Tsai, however, was criticised by some Twitter users, with one saying she cosies up to whichever country that has some sort of conflict with China.

The statement issued by the Chinese embassy in Thailand appears to have sparked a surge of tweets in Thailand related to the topic, with the hashtag #milkteaisthickerthanblood trending at the top on Wednesday morning, April 15.

Trending at number two was the hashtag #MilkTeaAlliance, while #Taiwan and #China were trending at the fourth and fifth places respectively. 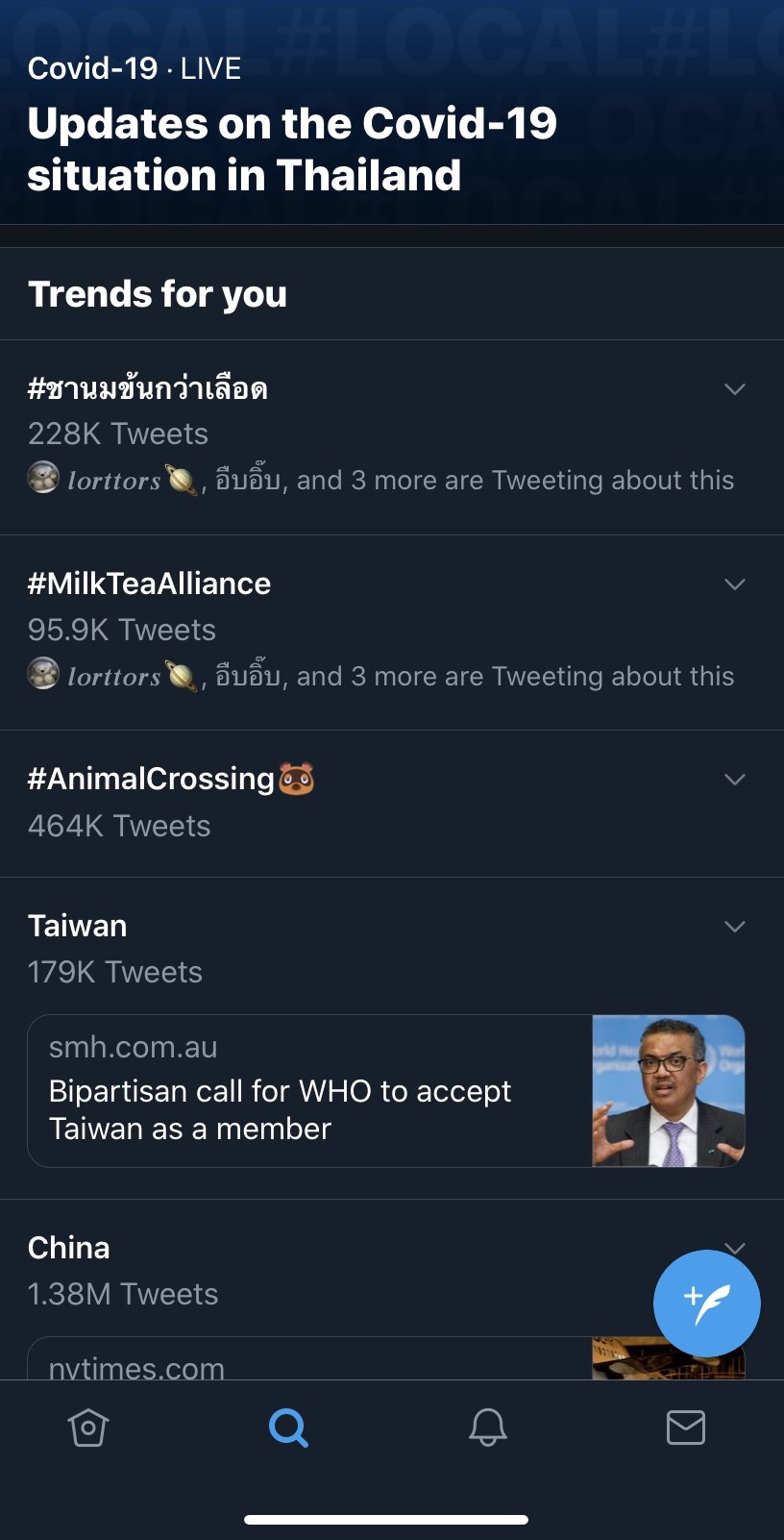 Later during the day, the hashtag #StopMekongDam started trending as well.

This episode has been said to reveal China's weakness when it comes to their public relations strategy using foreign social media platforms such as Twitter.

Hong Kong-based author and pro-democracy activist Jason Y. Ng pointed out what appears to be the key difference between Thai netizens (composed largely of the younger Thai population) and the Chinese 50 Cent Army, who are social media warriors employed by the Chinese government to defend the Party's stance.

He said the Thais won the PR war on Twitter as they do not equate their country to the government, which frees them up to love their country, while still being able to reserve their own opinion towards the government without having to follow them with "blind loyalty".