The Ministry of Health (MOH) has announced 54 new cases of Covid-19 in Singapore on March 23, bringing the total number of cases to 509.

This makes it the highest single-day increase of Covid-19 cases in Singapore.

Out of the 54 new cases, 48 of them are imported, while six are local cases.

All six cases are unlinked.

A further eight cases were discharged, taking the total number of discharged cases to 152. Meanwhile, there are still 15 in the intensive care unit.

Highest-ever number of Covid-19 cases in one day 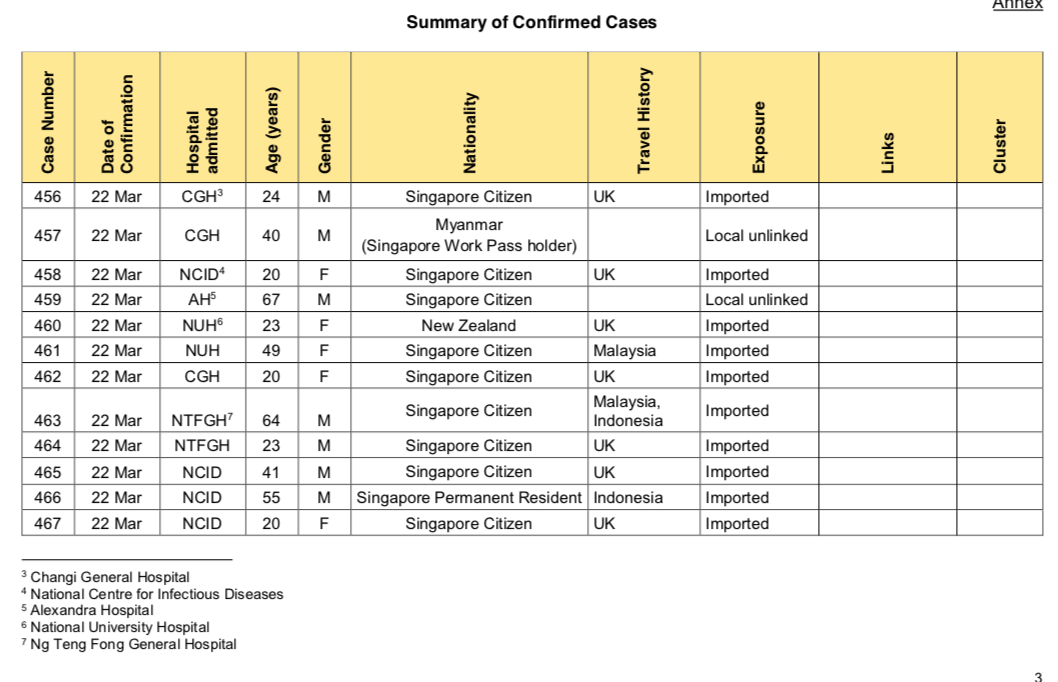 The 48 imported cases had travel history to Europe, North America and ASEAN. All, except one, were returning residents and Long Term Pass Holders.

Case 115 is a 62-year-old female Singapore Citizen who has no recent travel history to affected countries and regions.

She is a family member of Case 114, and is linked to the cluster involving a private dinner function at SAFRA Jurong.

Case 170 is an imported case involving a 56-year-old female Indonesian national who had arrived in Singapore on Mar. 9.

Case 178 is an imported case involving a 37-year-old male Filipino national who is a Singapore Work Pass holder.

He had been in the Philippines from Feb. 11 to Feb. 19, and again from Feb. 23 to Mar. 2 to visit a relative with pneumonia who has since passed on.

Case 211 is a 35-year-old female Filipino national who is a Singapore Long Term Visit Pass holder. She is linked to Case 142.

Case 235 is a 31-year-old female Singapore Citizen with no recent travel history to affected countries and regions.

She is employed as a Medical Social Worker at SGH, and is linked to Case 208.

Case 260 is a 48-year-old female Singapore Permanent Resident who has no recent travel history to affected countries and regions.

Case 291 is a 52-year-old male Indian national who is a Long Term Pass Holder. He had travel history to Indonesia, and is a family member of Case 260.

Short-term visitors will not be allowed to enter Singapore after Mar. 23

Four more cases were discharged, including an 80-year-old patient who was discharged four days after being confirmed with Covid-19.

With a surge in imported cases recently, Minister for National Development and co-chair of the Multi Ministry Taskforce Lawrence Wong announced on March 22 that all short-term visitors will not be allowed to enter or transit through Singapore.

On March 23, the Immigration and Checkpoints Authority (ICA) also announced that all travellers arriving in Singapore, including Singapore citizens and permanent residents, must submit a health declaration prior to proceeding with immigration clearance.

This will take effect from March 27, 9am.

Meanwhile, private hospitals have started to receive recovering Covid-19 patients from public healthcare institutions in order to ease their load.

The first is Mount Elizabeth Hospital in Orchard Road, for instance, which received 29 patients from NCID on Monday, March 23.