Singaporean intellectual Cherian George has hit out at Michael Petraeus, the man behind the self-styled one-man-show news commentary website that is Critical Spectator.

George is currently a professor of media studies at Hong Kong Baptist University's School of Communication.

In a tweet posted on Wednesday, Oct. 9, he posted a link, ostensibly published by Petraeus, to screenshots of an email exchange between them, saying he "couldn't resist feeding this troll".

Couldn’t resist feeding this troll. He’s made our emails public. Wonder if PAP knows how trolls like him and Calvin Cheng hurt it. The populist demons PAP’s using to suffocate critics will poison the culture sustaining its antipopulist technocratic model. https://t.co/4F41bRER1t 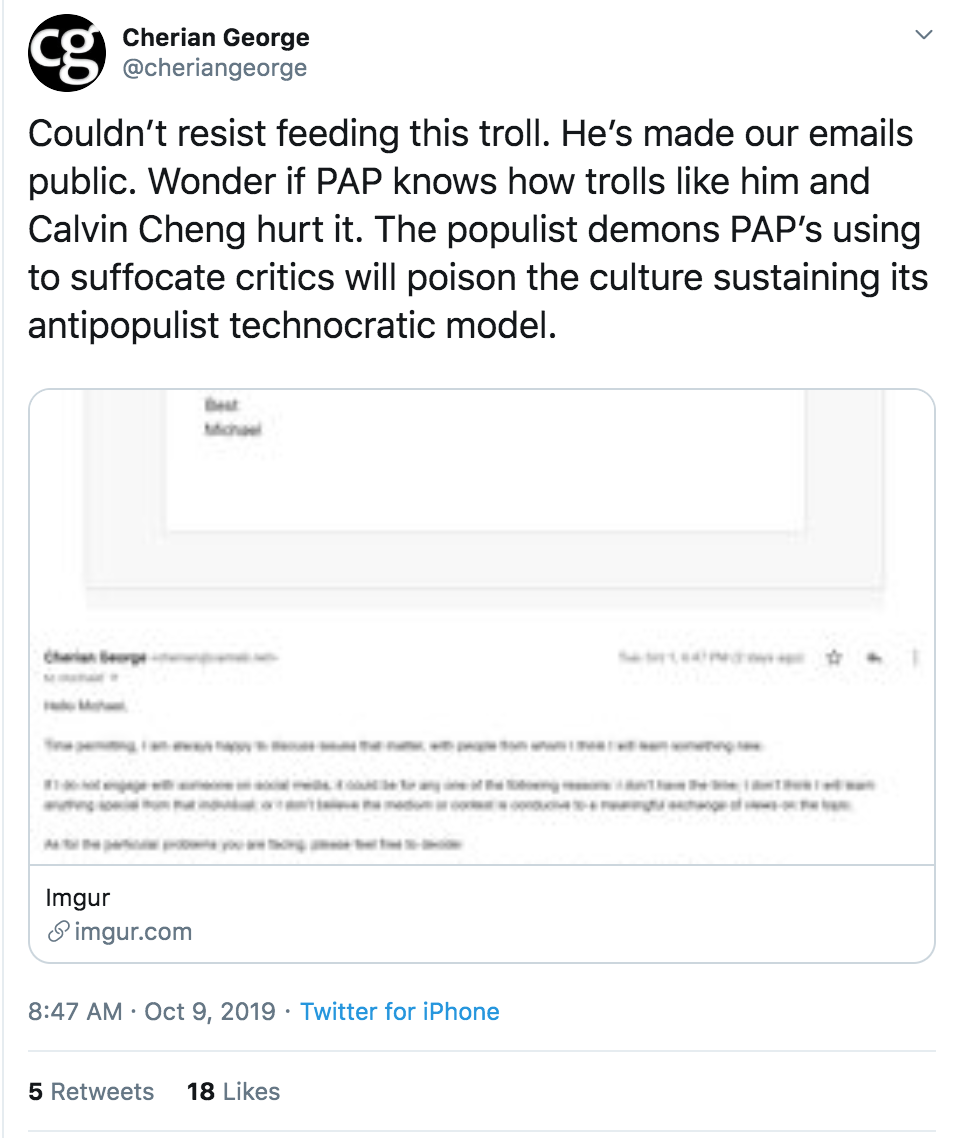 In his tweet, George also referred to "populist demons" who will "poison" the culture that keeps the People's Action Party (PAP)'s model of antipopulist technocrat-style governance working.

He also mentioned former Nominated Member of Parliament Calvin Cheng as a troll, wondering if the PAP knew how the two men “hurt” it.

Cheng previously praised Petraeus for questioning a claim made by local poet and playwright Alfian Sa'at, who said "dissent is always an essential part of any democracy".

Prior to the exchange of emails between George and Petraeus, which were dated around Oct. 1 and 2, Petraeus had left at least three comments on a previous tweet from George on how national broadsheet The Straits Times (ST) was, he believed, "supporting the Singapore government's attack on independent journalists, not for lack of professional ability but for want of ethical application":

Here are screenshots of his responses: 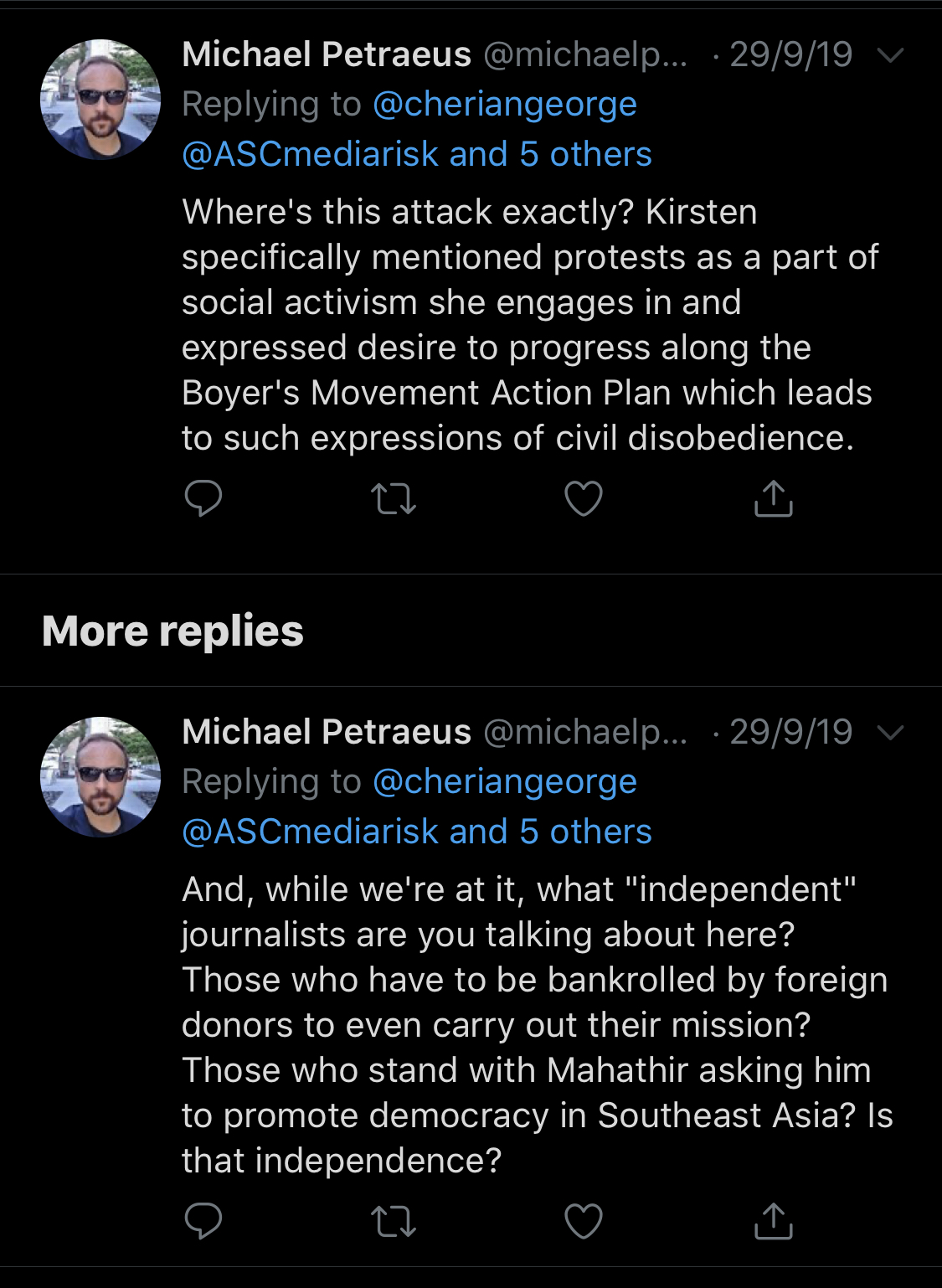 Petraeus: Free speech but why you no engage with me?

George has not replied to Petraeus' comments on the tweet thread, which might explain the email from the latter that criticised George for failing to "engage in actual discussion in the online media".

However, George said he would not engage in further discussion on the issue with him, giving a list of reasons for his decision.

Petraeus then accused George of "supposedly defending free expression" yet choosing to be "walled off from dissenting opinions".

However, George stood by his decision to not discuss his tweet with Petraeus, adding that the latter should not take his lack of response "personally".

In his reply, Petraeus continued his previous argument about George "ignoring the rest of the world" and shutting himself in an "echo chamber" despite being an advocate for "free speech".

He also ended his email sarcastically by putting quotation marks on the word "professor". It is unclear if George responded to Petraeus' latest email.

You can read the chain of emails here.

Pro-ruling party, or simply being objective?

Petraeus is widely seen to be a strong supporter of the PAP due to his defence of PAP-led government policies.

For instance, he praised the Singapore government for its approach to the LGBT issue, and defended the high paycheques of Singaporean ministers.

He previously scrutinised the words and actions of freelance journalist and activist Kirsten Han, as well as Terry Xu, editor of alternative media site The Online Citizen (TOC).

Back in May, in response to accusations from opposition politician Brad Bowyer that he was "stirring the fire" at the height of tensions between Singapore and Malaysia, Petraeus slammed him, as well as PVP founder Lim Tean, for talking about "freedom of speech as long as this speech does not reveal their corrupt nature (and hypocrisy)".

Compliments from a PAP politician

Recently, his commentary also appears to have received a positive mention from Speaker of Parliament Tan Chuan-Jin, who shared a Facebook post written by Petraeus, and encouraged others to "read and share" it.

Tan agreed with what Petraeus wrote on what the latter calls a "negative" approach to coverage on news regarding the rise in fees for 330 childcare centres in Singapore, adding that the issue of childcare subsides "resonates a great deal" with him as he worked on them while he was in the Ministry of Social and Family Development (MSF).

Petraeus comments frequently on Singaporean political and social issues, saying he writes about Singapore because of what he says is popular demand from Singaporeans who are interested to know his opinion on various Singaporean issues.

Fang claimed that these sites have either received foreign funding, or have page managers or administrators who are located in other countries.

Critical Spectator, on the other hand, run by a Polish national, was not included in this list.

Some other articles on Cherian George: