Singapore's mass rapid transit (MRT) screeched to a literal halt when the North-South Line and East-West Line broke down on July 7, 2015.

More than 250,000 commuters were left stranded during the disruption which lasted more than two hours - thanks to a contaminated electrical component resulting from a tunnel leak.

2015 was a bad year for public transport.

That year, Singapore's rail network (including the LRT network) experienced an average of 2.5 disruptions per month from January to June. Crowded trains and buses was also a common grouse among commuters.

Less than two months later, then-Minister for Transport Lui Tuck Yew stepped down. His successor Khaw Boon Wan promised in his first blog post as Transport Minister that things would get better.

So has our rail network improve in that four years?

Rail reliability improved across all lines

Is our rail network -- particularly the North-South and East-West lines -- better now?

Rail reliability is measured in terms of the distance travelled between delays, specifically delays that last at least five minutes.

That measure is called Mean Kilometre Between Failures (MKBF).

Here's the breakdown for each MRT line:

All showed improvement in their MKBF from 2015 to 2018, meaning trains on all lines travelled longer distances between delays.

As of July 2019, the Downtown Line, North-South Line, and North East Line have surpassed the one million MKBF milestone, according to Khaw.

In terms of actual service delays, the overall MRT network saw a drop in number in delays that lasted more than 30 minutes. There were 9 such delays in 2018, down from 15 in 2015. That's a 40 per cent drop.

Overhaul of the North-South and East-West Lines

A large part of the improved rail reliability is due to a massive overhaul of the North-South and East West Lines which started in 2013.

Three core components -- the sleepers, third rail, and signalling system -- on both lines have been completely renewed.

The original ageing wooden sleepers were replaced by concrete ones which will last longer.

Old sleepers also need to be replaced as worn out ones make rides more bumpy.

The third rail -- which provides power to the trains -- were replaced as well to prevent power faults that result from wear-and-tear.

Lastly, the North-South and East-West Lines were fitted with a new signalling system (the Communications Based Train Control system) which allows for a smaller safety distance between trains. This reduces the interval between trains which means a shorter wait for commuters.

Another three core components -- the power system, trains, and track circuits are on track to be fully renewed by 2023.

Older trains on the North-South and East West Lines, in particular, are being upgraded with sub-systems such as air conditioning, electric doors, brakes and propulsion system. They will also come with sensors that report the trains' state of health.

Aside from the NSEWL overhaul, other small changes have helped.

The Bukit Panjang LRT system is also currently undergoing a four-year overhaul to replace its signalling system and vehicles which started in 2018.

In the same year, LTA announced that a new monitoring system which can potentially identify faults before they occur will be introduced across the entire rail network soon, starting with the Downtown Line in mid-2020.

New trains procured by LTA will also come with condition monitoring systems which allow engineers to monitor the health of the trains continuously.

To alleviate congestion on trains, LTA has procured more than 140 new trains for the five rail lines since 2015. 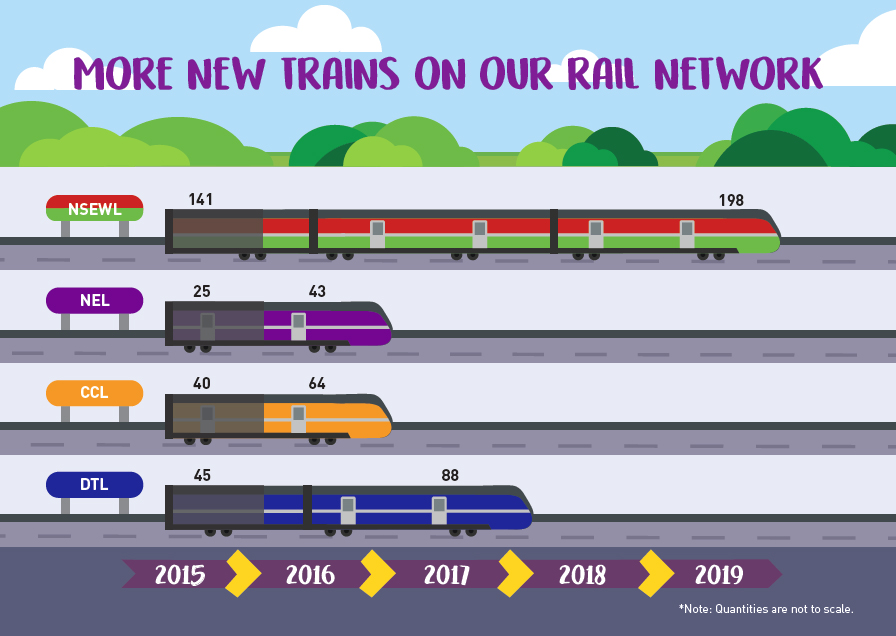 LTA said that there was a 12 per cent increase in number of commuters who travelled during the morning pre-peak period in 2018.

12 per cent might not seem much but when compared to the 2 per cent increase in morning peak ridership growth, it is a considerable jump.

So four years on, Singapore's rail network has seen some improvements.

However, colleagues tell me that their morning commutes along the East-West Line are still packed, especially at major interchanges like Jurong East station.

Other such complaints can be still gleamed across social media.

Admittedly, it's not perfect yet, but we might just be on our way there.