Sometimes, taking public transport can be a pretty exhausting experience.

Trains are crowded, stuffy and smelly, and with everyone packed like sardines during peak periods especially, the intrusion of personal space is bound to grate on some people's nerves.

One lady however, seemed to have a rather averse reaction to a young boy breaking her personal bubble.

A photo uploaded to Reddit's "trashy" subreddit by user maxdilbe on July 4, 2019, sparked much debate by netizens.

The photo showed what seemed like a middle-aged lady with her face censored out, holding out a toothpick in her right hand and pointing it in the direction of a young boy sitting to her left.

According to maxdilbe, the action was in response to the kid falling asleep on her arm several times.

The lady had likely hoped that the toothpick would poke the boy, perhaps jolting him awake and deterring him from leaning against her.

Maxdilbe clarified that the photo had been taken in Singapore.

In a subsequent comment on the thread, maxdilbe also shed some light on the incident.

He stated that the boy appeared to be around four or five years old, and was accompanied by his caretaker or mother at the time.

Despite the "annoyed looks" that the older lady shot at the boy's guardian when he fell asleep on her arm, the guardian allegedly did not care.

The lady then resorted to the toothpick, despite her husband offering to switch seats with her.

Most Redditors sided with the lady

Interestingly, the majority of Redditors supported and even praised the woman's actions, with many citing personal space as a legitimate reason for the woman resorting to such actions.

One user commented that a "toothpick was the mildest response he could think of".

Several even stated that if they were in the lady's position, they would do the same.

Others placed the blame on the parents, commenting that the kid's lack of social etiquette stemmed from his parents' failure to teach him about personal boundaries.

They also added that at the age of four or five, the kid should know that sleeping on strangers' shoulders was something frowned upon.

Another portion of netizens claimed that the incident was no big deal, and that the lady had simply been holding "a toothpick, not a knife". 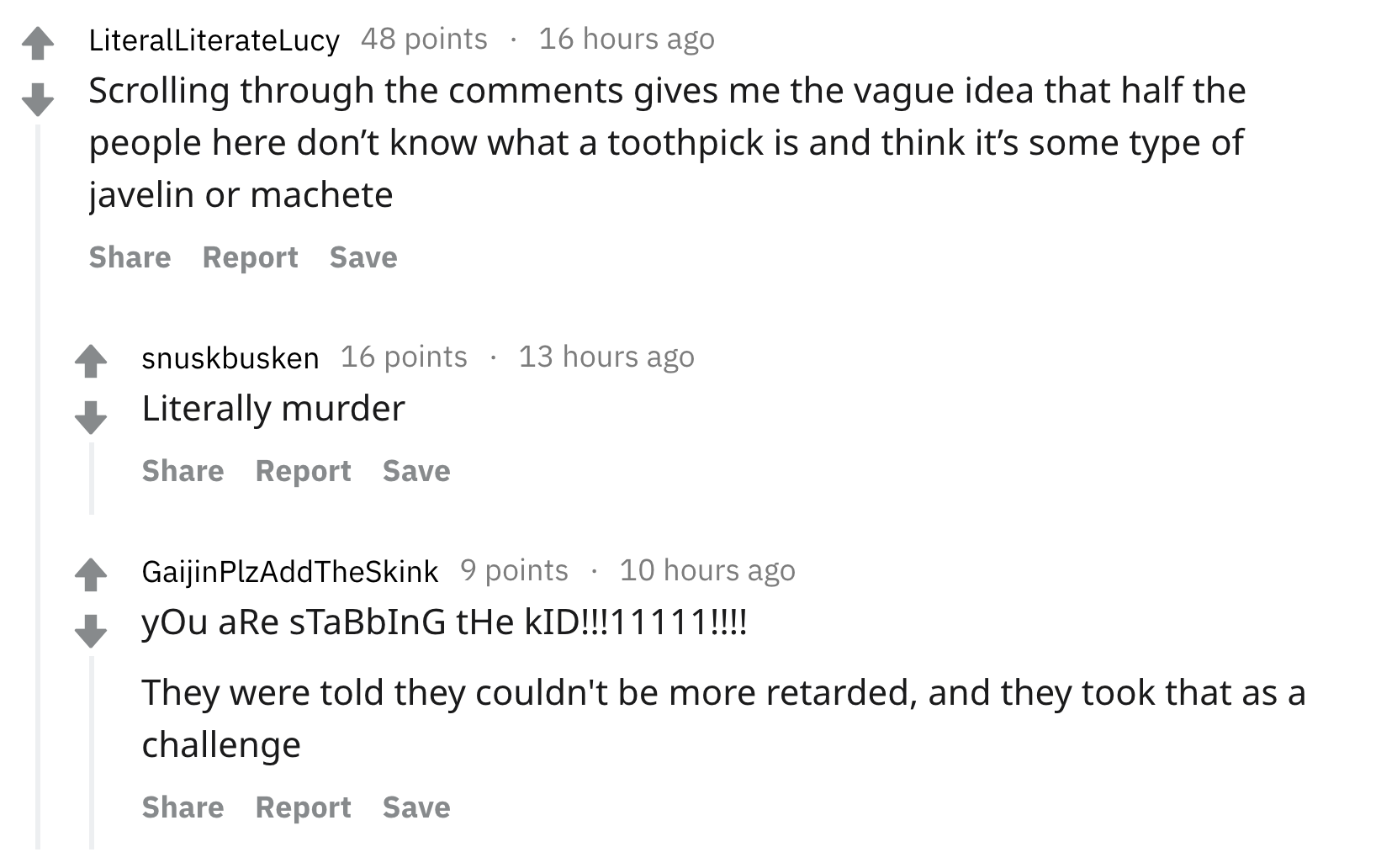 In spite of the overwhelming majority of netizens supporting the lady's actions, a small minority of, perhaps more sensible people, did weigh in with their opinions as well.

They suggested that there were plenty of alternative ways the lady could have responded with, such as talking to the boy's guardian or switching seats.

There were also some netizens that remained empathetic to the lady's plight, but acknowledged that stabbing a young boy for something he had been doing unintentionally might have been slightly harsh.

These sentiments were echoed by maxdilbe in an update to his original comment on the thread, stating that the lady "could've done anything else instead of holding a damn toothpick".

He elaborated that the boy's guardian eventually noticed the toothpick and roused the kid to bring him to another seat.