A Twitter user, Minionman, was approached on the MRT train in Singapore by a random stranger.

According to him, the stranger, who would introduce himself as Takalah Tan, complimented him on his shirt.

However, Tan was acting "kinda off" and looking at him weird, so Minionman was a bit apprehensive.

Not just some strange person

Tan would turn out to be more extraordinary than some weird random stranger.

Here is the Twitter thread, which has, deservedly so, gotten over 40,000 retweets in just a few days.

This dude walked up to me and complimented me on my shirt. seemed kinda off so I was set to say thanks for the compliment and move off, he was acting kinda funny and looked at me weird. Something told me to stay and listen tho and thank god I did. pic.twitter.com/s647Klxucp

As mentioned in the thread, Tan did go through a horrendous injury, way back in May 1994.

Tan went into detail about the accident in a write-up for The Red Cross.

He had been catapulted 70 meters from the rightmost lane to the shoulder curb.

Here he is post-accident.

Be warned, it is rather graphic.

He also "dislocated his left shoulder, fractured three of his right-ribs and completely fractured and shortened his right shin by 1½ inches".

Or as he told a young man on a train, he had half his brain left. 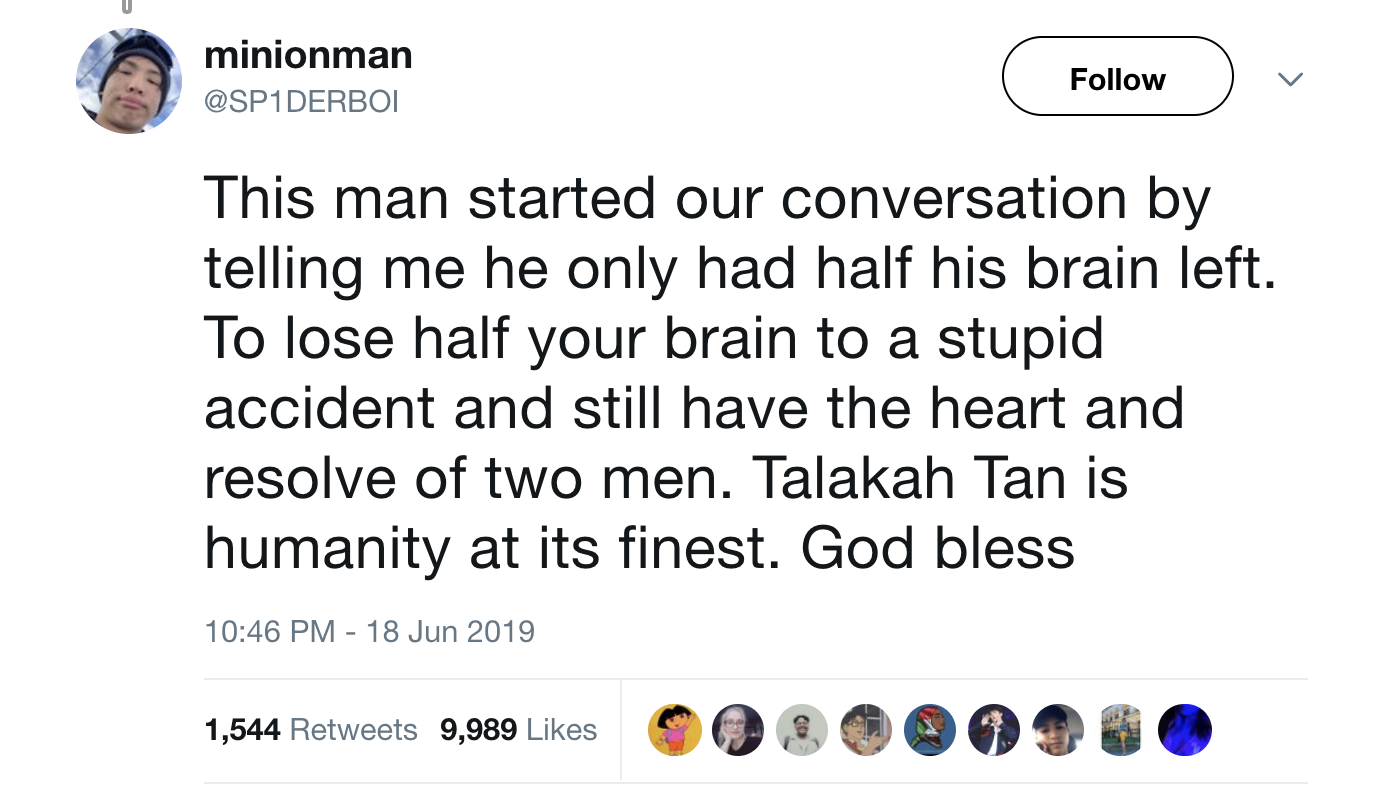 If the injuries weren't bad enough, according to Tan, the surgeon gave him a 0.1 percent chance of pulling through.

He also lost a third of blood, which will impact his actions later on in life.

Dudes name is takalah and was a great sportsman growing up, competing in tri-athalons and the like. Smart too, seeing he graduated from university with awards, an engineering degree and the promise of a job placement in a renowned multinational firm. pic.twitter.com/10Xleryp85

According to the same Red Cross article, Tan was a commando, a boxing champion, a triathlete, skydiver, bungee-jumper, and scuba-diver.

Tan, with his almost ridiculous list of achievements, was then only 24, and about to enter the working world.

Tan had clinched a job with a multinational company, beating out 7,000 applicants in the process.

A week before he entered a new world, the accident happened.

The long road to recovery

As with any accidents that horrific, Tan's recovery story is a hard narrative to tell linearly.

There were procedures that he went through to remove blood-clots pressed between his skull and brain, surgeries and reconstructions on his face, and even a shin lengthening procedure.

Tan also had to re-learn how to talk, because the accident had resulted in him forgetting speech.

But while he was slowly recovering from the incident, another kind of misfortune fell upon him.

His father suffered a heart attack and died, after he had chosen not to go for a heart-bypass.

Tan is convinced that his father had forsaken that procedure due to the high cost his own surgeries had accrued.

This was Tan's lowest point, and he even contemplated suicide.

And that was also the event that hardened his resolve.

Tan told Red Cross: “I told myself that my father died to pay my debts, so I must keep improving myself; to henceforth be ‘A lighted-beacon in troubled waters' -- to bring people to safer shores."

Despite struggling through his first few jobs, due mainly to his poor memory, Tan would eventually rise above this hardship as well.

Tan would earn a Masters of Public Health with respect to brain injury, and a post-graduate diploma in education.

And he's also a motivational speaker, because, of course, he is.

He also donates blood quarterly, and by 2016, he had donated more than 50 times.

This probably sums up the amazingness of Tan's recovery story best. 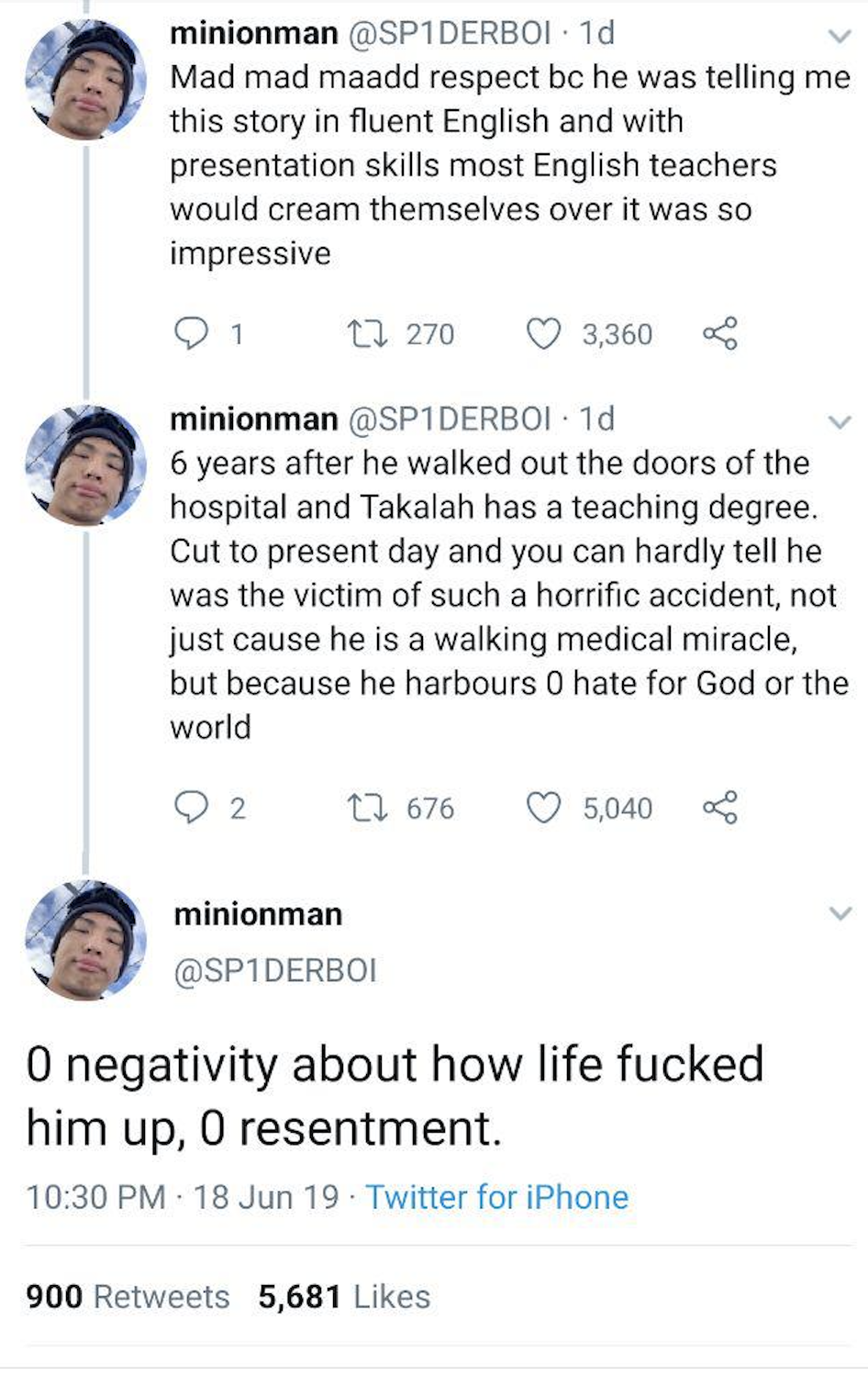 You can hear Tan tell his story here: