The organisers of this year's Osim Sundown Marathon apologised on Sunday after runners took to its Facebook page complaining of multiple issues at the event.

These included an almost hour-long delay in the start time for the half and full marathon runners, narrow running paths and poorly-lit routes, but most of all, at at least two consecutive hydration points, there was no water available for them.

Organised by Infinitus Productions, the Sundown Marathon was held on Saturday night, June 1, and flagged off from the F1 Pit Building.

According to those who took to the official Sundown Marathon Facebook page with their complaints, one of the problems they said they experienced was a delay in the flag-off.

While both the 21.1km half marathon and the 42.195km full marathon were supposed to begin at 11:30pm, the marathons were supposedly delayed, and runners only started running almost an hour later.

Some also said the half and full marathons should not start at the same time, as this caused jams along the marathon route, forcing some runners to walk and resulting in further delays to their finishing times.

The jam was made worse when certain points along the route were allegedly too narrow for more than two runners to pass through at a time.

Certain areas along the route were said to be dark as well, rendering runners vulnerable to accidents.

As you might have observed from the comments above, runners pointed out the lack of water supplies.

One reader who submitted these screenshots to us told us she alerted the race organisers to this after she completed her run: 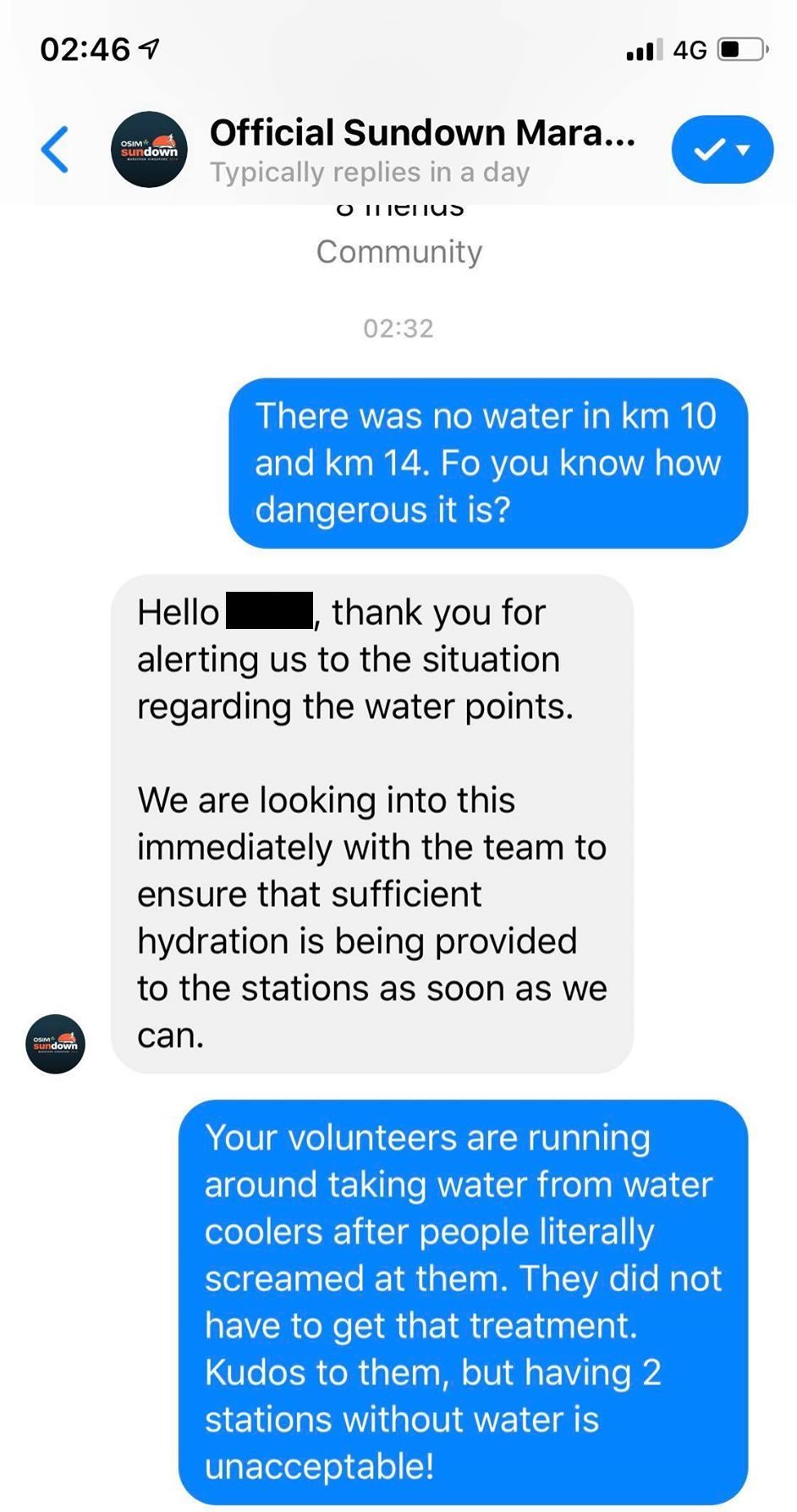 Some runners claim that they were even told by the organisers to get water from toilet sinks.

Many had to go elsewhere — away from the marathon route — to quench their thirst after they were unable to get water at the hydration stations.

In addition, more than one runner agreed that this was not the first time the marathon was so poorly organised.

Sundown Marathon Singapore's organisers have since apologised in a Facebook post published on Sunday, June 2, for the "inconvenience caused", saying these issues "should not have occurred".

They explained that the delay to the flag-off was due to an "unforeseen obstruction on route which had to be cleared to ensure the safety of the runners".

"The race was flagged off once the route was cleared and additional post-race shuttle services were provided to cater to the delay," they said.

The organisers also acknowledged the lack of water supplies at three hydration stations along the run route, saying the shortage was due to "some logistical issues of the deployment of the water".

Despite dispatching additional water supplies to the affected hydration stations immediately upon learning of the issues, they said the water "unfortunately" did not reach the stations in time.

They promised that they will be looking into the issues and will prevent them from happening again in future races.